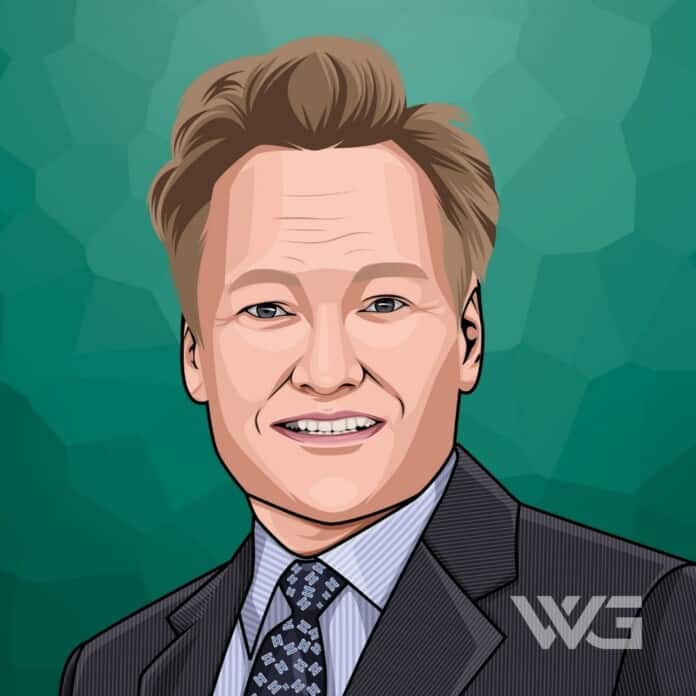 What is Conan O’Brien’s net worth?

Conan O’Brien is an American television host, comedian, writer, and producer from Massachusetts. He is best known for hosting several late-night talk shows; since 2010, he has hosted Conan on the cable channel TBS.

Conan Christopher O’Brien was born on the 18th of April, 1963, in Brookline, Massachusetts. O’Brien is the son to Thomas Francis O’Brien and Ruth O’Brien.

His father was a professor of medicine at the prestigious ‘Harvard Medical School,’ a physician, and an epidemiologist. His mother was an attorney till she retired in 1997.

He auditioned for the position of the host, and on April 26, 1993, he was chosen as the new host of ‘NBC’s late-night show, renamed as ‘Late Night with Conan O’ Brien.’

In 1994, David Letterman appeared on the show and made a lot of positive statements that encouraged the team to keep going. Steadily, Conan started connecting with the audience.

The show ran for 15 seasons after it was almost canceled due to lack of viewership. By 2005, the show had garnered an average viewership of 2.5 million. The show aired its last episode on February 20, 2009, with O’Brien ending the episode by using an axe to destroy the set.

In 2007, he co-wrote the pilot for the show ‘Andy Barker, P.I.’ He was also one of the executive producers of the show.

Here are some of the best highlights of Conan O’Brien’s career:

“A new presidential poll reveals that Democrats have the edge among voters under 30. The good news for Republicans is that there are only six people under 30 who actually vote.” – Conan O’Brien

“A group of psychologists says they have discovered twenty-three different body language indicators that show whether or not a person is lying. If you would like to see all twenty-three at the same time, they recommend taking a guided tour of the White House.” – Conan O’Brien

“President Bush delivered a commencement speech at a university in Wisconsin. A very inspirational speech. Apparently Bush told the students, ‘You can do anything in life if your parents work hard enough.” – Conan O’Brien

“Today, you have achieved something special, something only 92 percent of Americans your age will ever know: a college diploma. That’s right, with your college diploma you now have a crushing advantage over 8 percent of the workforce. I’m talking about dropout losers like Bill Gates, Steve Jobs, and Mark Zuckerberg.” – Conan O’Brien

Now that you know all about Conan O’Brien’s net worth, and how he achieved success; let’s take a look at some of the lessons we can learn from him:

1. Don’t Throw the Past Under the Bus

Here’s the thing: Conan didn’t throw the past under the bus. Sure, Letterman was publicly sniffing for dirty laundry to air (that’s what gossips do), but Conan did not dishonor NBC.

Leaders don’t throw the past under the bus, even when they’re Leno’d. There is no honor in tearing down people and organizations … especially in church-world.

2. Surround Yourself With People Who Encourage You To Reach Your Potentials

Choose to be with people who are supportive of you and encourage you to be your best.

3. You Should Never Be In a Relationship If Someone Insists That It Has To Be a Secret

Nothing good ever comes out from anything that is founded on deceit. Healthy relationships have the bedrock of honesty and openness.

How much is Conan O’Brien worth?

Conan O’Brien’s net worth is estimated to be $200 Million.

How old is Conan O’Brien?

How tall is Conan O’Brien?

Conan O’Brien is a popular TV host, writer, and comedian, best known for hosting the talk show ‘Late Night with Conan O’Brien’. Conan has appeared in a number of TV shows too, such as ‘Spin City’, ‘Robot Chicken’, and ‘Nashville’.

What do you think about Conan O’Brien’s net worth? Leave a comment below.

Forrest Griffin helped to put the UFC on the map by being the first winner of The Ultimate Fighter, which earned himself a spot in the promotion's hall of fame.