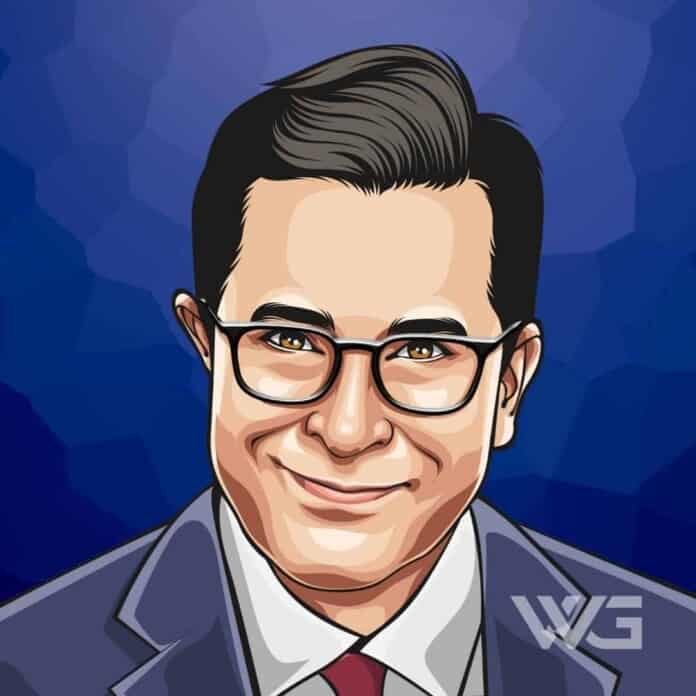 What is Stephen Colbert’s net worth?

As of February 2023, Stephen Colbert’s net worth is approximately $75 Million.

Colbert is best known for hosting the satirical Comedy Central program ‘The Colbert Report’ from 2005 to 2014 and the CBS talk program ‘The Late Show with Stephen Colbert’.

Colbert is the son of Lorna and James William Colbert Jr. He was the youngest of the eleven siblings, James, Edward, Mary, William, Margo, Thomas, Jay, Elizabeth, Paul, Peter, and Stephen.

In 1974, when he was 10, his father and two brothers were killed in an air crash. His mother relocated the family to Charleston, where he attended the Episcopal Porter-Gaud School.

Colbert began his career in 1988 when he joined some free improvisation classes.

He left Second City in 1995 and shifted to New York to work with Sedaris and Dinello to create, ‘Exit 57’, a television comedy show. The series though favorably reviewed, lasted only 12 episodes.

He worked as a cast member and writer on ‘The Dana Carvey Show’, in 1996, along with Steve Carell, Robert Smigel, and Dino Stamatopoulos, but the series was canceled as the satire was distasteful.

Colbert, along with Sedaris and Dinello worked on a new comedy serial, Strangers with Candy, for Comedy Central. Characterized as a cult show, its 32 episodes were aired between 1999 and 2000.

At the White House Correspondents’ Association Dinner in 2006 as the featured entertainer, his satire targeted President Bush and the media. He shocked the audience to silence but became an internet and media sensation.

He released a book, I Am America (And So Can You!), in 2007 which contains political satire written primarily by him, the role of his writing staff in it being minimal.

Here are some of the best highlights of Stephen Colbert’s career:

“You are about to start the greatest improvisation of all. With no script. No idea what’s going to happen, often with people and places you have never seen before. And you are not in control. So say ‘yes.’ And if you’re lucky, you’ll find people who will say ‘yes’ back.” – Stephen Colbert

“After nearly 15 minutes of soul searching, I have heard the call. Nation, I will seek the office of the president of the United States. I am doing it!” – Stephen Colbert

“Make no mistake – they’re coming for our guns. And we freedom-loving gun lovers are totally defenseless! Other than, you know, the guns.” – Stephen Colbert

“Corporations have free speech, but they can’t speak like you and me. They don’t have mouths or hands.” – Stephen Colbert

Now that you know all about Stephen Colbert’s net worth, and how he achieved success; let’s take a look at some of the best lessons we can learn from him:

In the interview, Stewart probes Colbert about the transition to being a true late night host. As Stewart explains to his friend “I came up in standup where you learn to deliver it as yourself and as authentic as you can be to yourself is as good as you are going to be as a standup.”

Many personalities share this struggle: the art of being real. In Colbert’s case, he had always been a walking/talking character. He made his name by playing a role. All of a sudden, he had to own his persona – to play himself.

It happens to most personalities – there is a bit, interview, event, or audience encounter that changes the game. For Colbert, it was an expansive, heartfelt interview with Joe Biden. “Only I, my real self, could have received what Mr. Biden was willing to share with the audience.” Colbert said.

How much is Stephen Colbert worth?

Stephen Colbert’s net worth is estimated to be $75 Million.

How old is Stephen Colbert?

How tall is Stephen Colbert?

Stephen Colbert became famous with the ‘Dana Carvey’ Show and ‘Strangers with Candy’. ‘The Daily Show’ made him a household name and soon he had his own parody show, ‘The Colbert Report’.

What do you think about Stephen Colbert’s net worth? Leave a comment below.