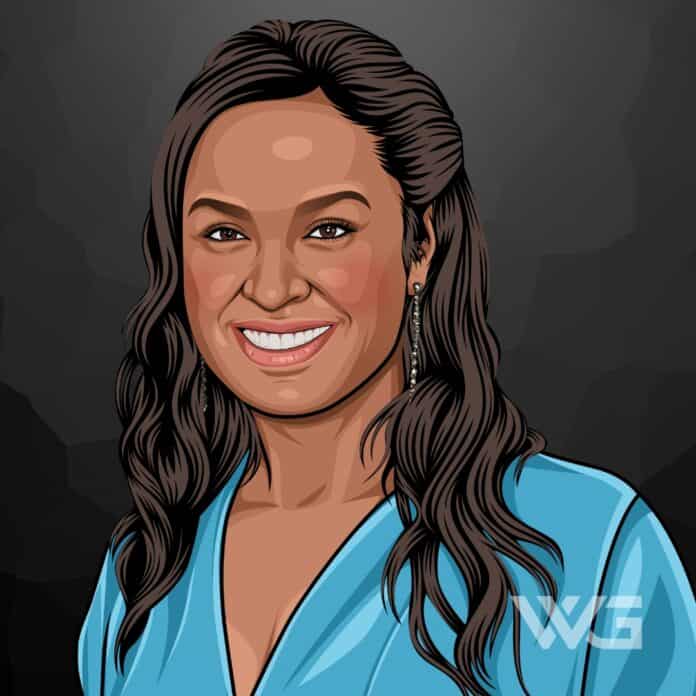 What is Laila Ali’s net worth?

Laila Ali is a former professional boxer from the United States who is also an actor and television show host. She is most famous for being Muhammad Ali’s daughter, but she has also achieved success as a professional fighter and media personality.

Ali made a name for herself as one of the top female boxers in the world during her eight-year professional career, winning several tournaments, and eventually retiring unbeaten.

Her titles included the female super-middleweight titles held by the WBC, WIBA, IWBF, and IBA, as well as the IWBF light heavyweight crown.

Laila Ali was born to Muhammad Ali and his third wife, Veronica Porché Ali, and she first started working as a manicurist at the age of 16.

She owned her own nail shop before she began boxing professionally after watching a women’s boxing match before a Mike Tyson fight on TV.

Laila Ali didn’t exactly get the reaction she hoped when she told her father that she wanted to pursue a career in boxing.

The senior Ali told her that she had chosen a “dangerous profession,” expressing his displeasure with her choice, but she was undeterred and carried on with her plan.

Due to her fame as the daughter of boxing icon Muhammad Ali, Laila Ali’s ring debut in 1999 was a high-profile occasion.

The timing of her debut and the endorsement increased awareness of women’s propensity for the typically male-dominated sport of boxing.

Given the well-known fights their dads had participated in, Laila faced Jackie Frazier-Lyde, the daughter of another great boxer, Joe Frazier, one of Don King’s boxers who had fought George Forman for the world title.

Ali defeated Frazier in the eight-round fight after receiving the majority of the judges’ votes in her favor.

In 2003, she competed in her largest match, going up against Christy Martin, who served as her idol. Ali defeated Martin in four rounds by knocking her out to win the fight.

Ali retired from competitive boxing in 2007 and competed against Gwendolyn O’Neil in South Africa for her most recent bout, which she won via first-round technical knockout.

She began hosting “Everyday Health” with Ethan Zohn and Jenna Morasca in 2012. The ABC program focuses on the lives of regular people who have health concerns but have overcome them to accomplish incredible feats.

Later, she had two celebrity reality television appearances on NBC’s “Stars Earn Stripes” and “Biggest Loser,” which debuted in 2012 and 2013, respectively.

When Giuliana Rancic took a leave of absence to give birth to a child, she temporarily filled in to co-host the chat show “Fashion Police” on the E! Channel.

On October 8, 1999, Ali faced April Fowler in her professional boxing debut at the age of 21.

In the first round, she eliminated her opponent after 31 seconds, an event that would become all too familiar with her opponents over the next 8 years.

Apart from being a boxer, Laila is also a TV personality who provides wellness and fitness advice and is also the CEO of her own beauty and lifestyle brand.

She has become a best-selling author and an inspirational speaker who hosts her own podcast as well as appears in films and television series as an actress.

She then added the Light Heavyweight title of the International Women’s Boxing Federation to her record two years later.

Here’s a breakdown of Laila Ali’s annual net worth:

Laila enjoys cooking and has competed on two occasions on the Food Network’s celebrity “Chopped” show, winning both times.

On August 27, 2000, Ali married Johnny “Yahya” McClain, who helped steer her career as he took on the role of manager.

Ali and McClain split in late 2005, and McClain stopped managing her, and Ali wed former NFL player Curtis Conway in Los Angeles on July 23, 2007. They have two children together; a son born in August 2008 and a daughter born in April 2011.

Ali is the stepmother of Conway’s three children and takes her role in their lives very seriously. Ali is also the sister-in-law of professional mixed martial artist Kevin Casey, who is married to her sister Hana

Her appearances allow her to showcase her talent and she also makes her renowned “oven-baked fried chicken.”

Here are some of the more memorable events in Laila Ali’s career:

Ali’s celebrity profile was boosted when she appeared on television as a co-host of American Gladiators and as a contestant on Dancing with the Stars, and she is now a sought-after fitness journalist for news programs as well.

How Does Laila Ali Spend Her Money?

Ali is a mother first and spends time with her two daughters in preference to her other duties as a celebrity and entertainer.

She has invested her money in a fitness and wellness brand business as well as in real estate.

For someone who grew up in an expensive gated community and traveled by private jet, Laila is surprisingly down to earth about her and her family’s needs.

Laila Ali is the creator of the bestselling cookbook “Food For Life: Delicious & Healthy Comfort Food From My Table To Yours” and the host of the OWN Emmy Award-winning series “Home Made Simple with Laila Ali.”

Laila’s goal is to demonstrate to people how they may enjoy healthier and more nutrient-dense versions of their favorite foods.

They can do this without having to give up the taste, served as a big source of inspiration for her as she wrote this specific cookbook.

Here are some of the best highlights of Laila Ali’s career:

Laila Ali’s unbeaten record is impressive given that she fought some of the toughest fighters in women’s boxing and still came out on top and unscathed.

However, her last fight against the South African, Gwendolyn O’Neil only lasted a couple of minutes into the first round before O’Neil was TKO’d, after which Ali said she was taking time away from boxing to have a child.

Laila Ali worked hard to become a champion, but it was a fight between two female boxers that was the catalyst for her professional boxing career.

Here are our favorite quotes from Laila Ali:

Laila Ali knows how hard it is to reach the top of professional women’s sports and she could only have done it by being totally committed to her goals.

Now that you know all about Laila Ali’s net worth, here are some of the best success lessons to learn from Laila Ali:

1. If It Was Easy, Everyone Would Do It

When you make sacrifices and work hard, you’re much more likely to achieve your goals. Laila believes that anybody could be a world champion, but not everyone has the commitment and stamina to stay the course and do what it takes to win.

To be taken seriously as a fighter, Ali had to find a team that took her seriously. She believes that without a group of people around you who have your back, it’s very difficult to achieve greatness.

3. You Need Guidance and Commitment

While it is possible Laila could have played any sport she wanted to, she was never pushed by her parents to do it in one or other direction.

This meant she never really did anything and thinks that it would be better if a parent guided their child and made sure that they committed to doing whatever it is, very well.

Laila Ali has achieved a huge amount in her life and it comes down to her commitment to stay the course and do what it takes to achieve her goals.

Now that she is a celebrity with her own TV shows, books, and brand businesses, she works hard to keep ahead of everything that comes her way.

This world champion has a lot to offer women around the world and serves as a role model to young girls, showing that anything is possible with a strong will and focused attention.

What do you think about Laila Ali’s net worth? Leave a comment below.