Known for being cocky and arrogant, but also one of the greatest fighters that ever lived. He was able to predict which round he’d knock out his opponent, and was as fast as lightening.

I’m sure you’ve heard many of these quotes before, but here are 32 legendary Muhammad Ali quotes on being great at what you do.

As always, share them on social media and let us know what other quote collections you want us to feature.

2. “He who is not courageous enough to take risks will accomplish nothing in life.” – Muhammad Ali

3. “My principles are more important than the money or my title.” – Muhammad Ali

4. “I hated every minute of training, but I said, ‘Don’t quit. Suffer now and live the rest of your life as a champion.'” – Muhammad Ali

7. “Service to others is the rent you pay for your room here on earth.” – Muhammad Ali

8. “I’m so fast, that last night I turned the light switch off in my hotel room, and was in bed before the room was dark.” – Muhammad Ali

9. “The fight is won or lost far away from witnesses – behind the lines, in the gym, and out there on the road, long before I dance under those lights.” – Muhammad Ali

10. “If they can make penicillin out of mouldy bread, they can sure make something out of you.” – Muhammad Ali

11. “Only a man who knows what it is like to be defeated can reach down to the bottom of his soul and come up with the extra ounce of power it takes to win when the match is even.” – Muhammad Ali

12. “I am an ordinary man who worked hard to develop the talent I was given. I believed in myself, and I believe in the goodness of others.” – Muhammad Ali 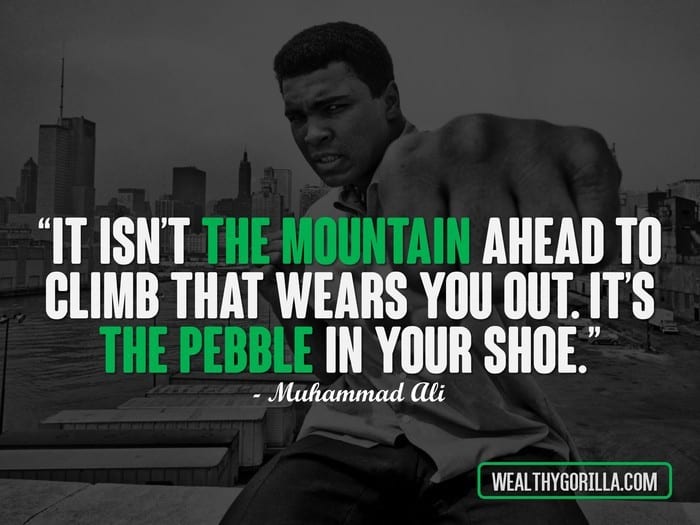 13. “It isn’t the mountains ahead to climb that wear you out. It’s the pebble in your shoe.” – Muhammad Ali

14. “Hating people because of their color is wrong. And it doesn’t matter which color does the hating. It’s just plain wrong.” – Muhammad Ali

15. “Silence is golden when you can’t think of a good answer.” – Muhammad Ali

16. “A man who views the world the same at fifty as he did at twenty has wasted thirty years of his life.” – Muhammad Ali

17. “A rooster crows only when it sees the light. Put him in the dark and he’ll never crow. I have seen the light and I’m crowing.” – Muhammad Ali

18. “God tries you in certain, certain ways. Some people are rich, and they believe in God. They lose the money, things get hard, they get weak and quit going to church. Quit serving God like they did.” – Muhammad Ali

22. “To make America the greatest is my goal, so I beat the Russian and I beat the Pole. And for the U.S.A. won the medal of gold. The Greeks said, ‘You’re better than the Cassius of old.'” – Muhammad Ali

23. “My way of joking is to tell the truth. That’s the funniest joke in the world.” – Muhammad Ali

24. “I wish people would love everybody else the way they love me. It would be a better world.” – Muhammad Ali

25. “Life is a gamble. You can get hurt, but people die in plane crashes, lose their arms and legs in car accidents; people die every day. Same with fighters: some die, some get hurt, some go on. You just don’t let yourself believe it will happen to you.” – Muhammad Ali

26. “Age is whatever you think it is. You are as old as you think you are.” – Muhammad Ali

27. “To be able to give away riches is mandatory if you wish to possess them. This is the only way that you will be truly rich.” – Muhammad Ali

28. “My trainer don’t tell me nothing between rounds. I don’t allow him to. I fight the fight. All I want to know is did I win the round. It’s too late for advice.” – Muhammad Ali

29. “There are no pleasures in a fight but some of my fights have been a pleasure to win.” – Muhammad Ali

31. “I never thought of losing, but now that it’ s happened, the only thing is to do it right. That’s my obligation to all the people who believe in me. We all have to take defeats in life.” – Muhammad Ali

32. “My way of joking is to tell the truth. That’s the funniest joke in the world.” – Muhammad Ali

Thanks for viewing this collection of the best Muhammad Ali quotes! Don’t forget to share them on social media.

Which are your favorite Muhammad Ali quotes? Leave a comment below.