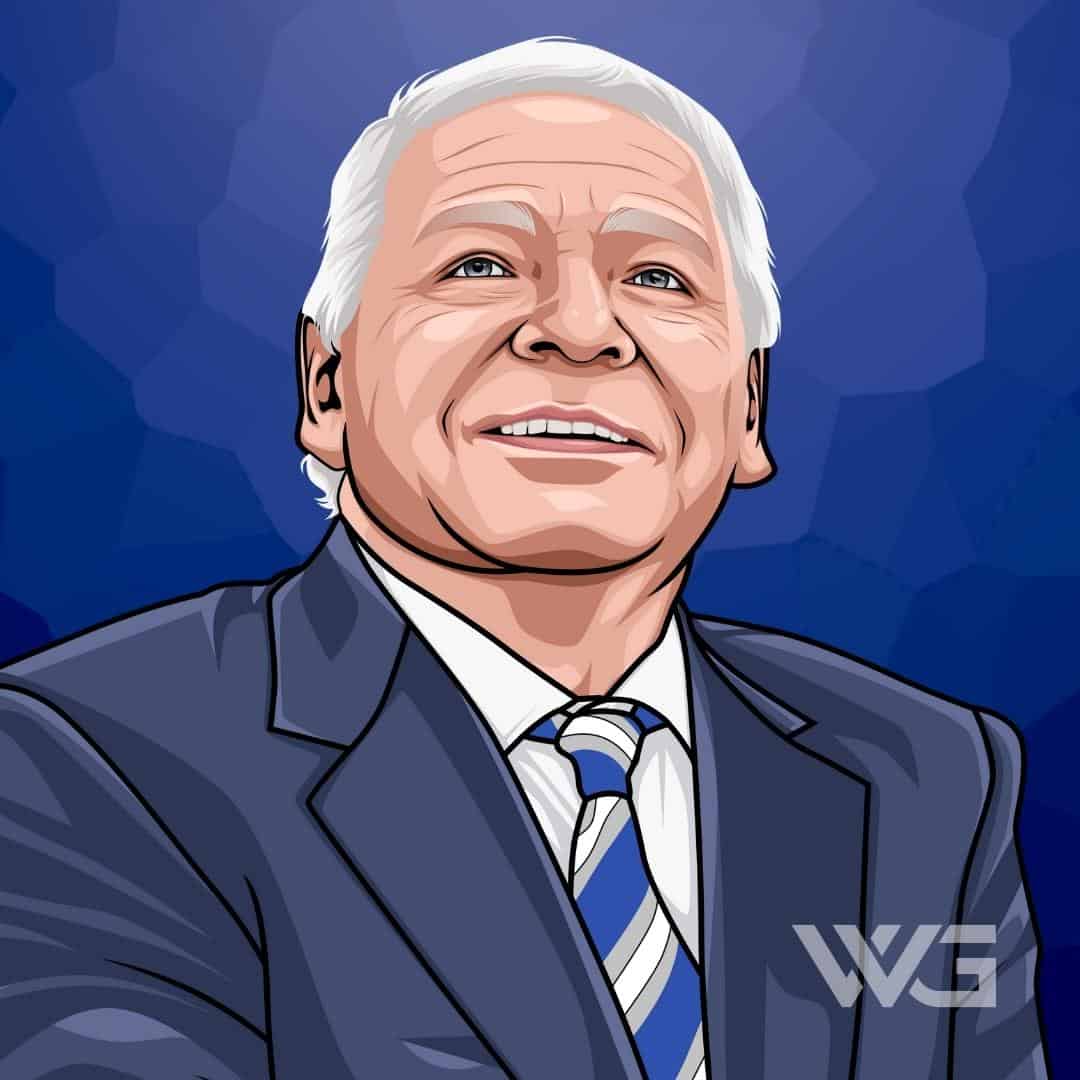 What is Dave Whelan’s net worth?

Dave Whelan began his career in the English football league and then retired to open a series of supermarkets. Dave is a pure example of a businessman and has an impressive net worth to show for it. Playing for Blackburn Rovers (from 1956 to 1960) and Crewe Alexandra (from 1962 to 1966) was just the beginning of his illustrious career.

Considered the most beloved English football player of all time, his debut was unfortunately brought to a halt due to a serious injury to his leg. This resulted in him being traded to Crewe Alexandra before retiring.

Not letting that stop him, Dave went on to start his own business which became the UK’s second biggest retailer.

David Whelan was born on the 24th of November 1936 in Bradford, England, and raised in Wigan.

Unfortunately, there is little record of his early years and he’s been tight-lipped about his family and how he was brought up. His forebearers were of Irish decent and he attended school in Wigan.

Other than that, we know little of his prowess at school.

Even though we do not have much information about his early childhood, we do know a lot about his career due to the great impact he’s had on English football.

During his footballing years, Dave became the face of what every fan wanted from their football players. Beginning his career with Blackburn Rovers, Dave played a total of 78 times before the tragic injury to his leg ended his hopes of completing the 1960 FA Cup Final.

The serious injury he suffered during the 1960 FA Cup Final was one of many serious injuries suffered by players in the 1950 to 1960 Era. It was so bad that it became known as the Wembley Hoodoo.

Soon after being injured, Whelan was sold to Crewe Alexandra F.C., where he continued to play for several years before finally retiring.

After retirement, Dave went on to divert all his attention to a chain of supermarkets named “Whelan’s Discount Stores”, which he ended up selling to Ken Morrison for 1.5 million pounds.

His move from football to CEO, one of the highest paying careers, paid off handsomely. This gave him the means to follow his passion, managing Wigan Athletic Football Club.

In 1995, Whelan bought the Wigan Athletic Foot Club, while it was languishing in division three.

Dave Whelan made a promise to get Wigan Athletic into the Premier League, a promise which he kept and fulfilled in 2005. Funding of £30 million saw the construction of the club’s new JJB Stadium. It was to become one of the largest stadiums outside the Premier League.

During 2007, Dave’s colleagues were retiring one by one and once Maurice Lindsay retired, Dave announced that he would be willing to sell the club after a proposed takeover from “a genuine Wigan fan”. On the 24th of October 2007, a former owner of Harlequins RL took over Wigan Warriors and bought out Whelan’s 89 percent stake in the club.

After his initially successful foray into the retail industry, Dave bought a fishing and sports store in 1977 named JJB Sports. Focusing on mainly sporting goods, JJB Sports became a chain of 7 stores by 1980. It is currently ranked as the UK’s second biggest sports retailer.

In a surprising turn of events, JJB Sports was fined £5.5 million in 2005 by the Office of Fair Trading. JJB Sports was found guilty of fixing the price of the English National Team and Manchester United shirts.

Consumer Magazine took it upon themselves to issue proceedings against JJB Sports to sue the retailer for damages on behalf of the affected consumers.

Since then, Whelan lost interest very quickly in the company and stepped down as chairman. But in October 2006, he intervened to overturn the settlement of a pay dispute and branded it “the equivalent of Communism” which led to a two-day strike.

In January 2007, he sold £50 million of shares in JJB Sports and eventually sold the 29 percent remaining later that same year. This led to an investigation by the Financial Services Authority because it was a contradiction of a statement that Whelan made to the stock exchange on the 26th of January 2007.

In March 2009, Whelan confirmed his acquisition of JJB Fitness Clubs and, instead of the sponsorship being Wigans Athletics JJB, it was renamed DW. The JJB Stadium is now known as the DW stadium, which is fitting given that Dave Whelan built and then owned it.

Here’s an overview of Dave Whelan’s earnings throughout his career. The figures are compiled from estimates of income earned from salary, endorsements, and dividends.

His other sources of income include income from various business deals and fees.

Dave Whelan is retired but has an estimated income of approximately $17 Million annually.

Here’s an estimated overview of his annual income:

Dave Whelan played football in an era before the multi-million dollar deals that soccer players enjoy today. He’s made his money though hard work and achieved impressive growth in his businesses through his immense entrepreneurial ability.

Here’s a breakdown of Dave Whelan’s annual net worth:

Dave Whelan has a lot that he has not shared with the public when it comes to his personal life and childhood.

What we do know is that he has a wife named Pat, a daughter named Jane, a son named Paul, and four grandchildren (one of whom is David Sharpe). David was appointed club chairman after Dave resigned in 2015.

Dave Whelan has been a popular character in English football for 60 years. While he guards his private life and business achievements, we do know that he is as successful in the boardroom as he was on the football field.

Here are some highlights from Dave Whelan’s career:

How Does Dave Whelan Spend His Money?

Even with the amount that Dave Whelan earns and his huge wealth, he is mostly content to spend time with his family and remain fit and healthy.

Dave does have properties all over the United Kingdom as well as a house in Scotland. His home in London has a price tag of $10 million. He doesn’t own any jets and is not too fond of the most expensive cars in the world either.

Dave Whelan has retired from actively managing both his retail and football investments.

From humble beginnings, Dave Whelan was able to work his way up the ladder to stand on the turf at Wembley and play in an FA Cup Final. He took that same impressive ability and turned his attention to managing a highly successful retail chain and football club.

Here are some of the best highlights of Dave Whelan’s career:

Dave Whelan is fiercely patriotic, seeing it as his duty to defend the honor of his club and his nation.

While this may not endear him to certain people within the establishment, he is recognized as loyal and honest with a deep love of the game of football and his country.

Here are our favorite quotes from Dave Whelan:

Dave Whelan is open and honest in his dealings with his players and his business partners.

The hallmark of his management style is trust and honesty. Here are three pieces of advice from this legendary soccer player and business leader.

Dave is the epitome of endurance and grit. He not only talks the talk, but he walks it as well. When you face adversity, never stop trying, as there is always a way to get to the top.

2. Everyone Deserves A Second Chance

It is easy to become jaded and lord it over your employees and family when you’ve experienced the success that Dave Whelan has. However, he’s never let success and fame go to his head and remains a down-to-earth and approachable individual.

3. Money Is Not Always The Key To Happiness

Dave Whelan is a family man who is not overly impressed by money. He rates family as a far higher priority in his life and proudly appointed his grandson to the chairmanship of his beloved football club.

Through the ups and downs of David Whelan’s career, he still seemed to sustain his self-possessed image at the top. Fame and wealth haven’t changed his down-to-earth, caring nature.

Being a great businessman, he was able to pick himself up after adversity and still pursue his passions. Despite his age, David is on top of his game at the ripe old age of 85.

What do you think about Dave Whelan’s net worth? Leave a comment below.