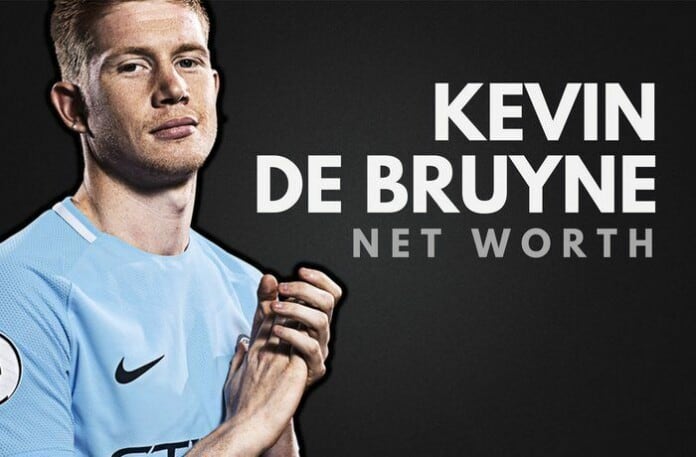 What is Kevin De Bruyne’s net worth?

Kevin De Bruyne is a professional soccer player from Belgium, who is currently playing for ‘Manchester City’ and the Belgian national team.

In the past, he has been named a ‘complete footballer,’ the ‘Best European Footballer’, and the ‘4th best footballer in the world’ by several different media sources.

In the first few years of his life, his family was always on the move because of his parents’ occupations. When Kevin was only four years old, he began playing soccer in his hometown.

When he was 14 years old, Kevin decided to leave home because of the lack of support and opportunity for him to fulfill his dreams of becoming a world-class soccer player. After leaving, he joined Genk’s academy and quickly started gaining attention from the media as a teenager.

With his family having very little money, Kevin scraped by with the bit of money he received at the club. During these teenage years, he visited his family occasionally and dedicated the majority of his time and energy to soccer.

August of 2012 was when Chelsea announced that Kevin would be temporarily transferred to the ‘Werder Bremen’ team. Soon after this, in July of 2013, Kevin was officially back on the Chelsea team.

In August of 2015, it was announced that ‘Manchester City’ got Kevin to sign on with a six-year contract for about $72 million.

In 2016 he led his team to the ‘UEFA Champions League’ semi-finals and was twice named the ‘man of the match.’ Recently Manchester announced that they have just signed a new contract with Kevin ensuring that he will remain on the team until 2023.

Here are some of the best highlights of Kevin De Bruyne’s career:

“Work hard for the dreams that you have.” – Kevin De Bruyne

“I have tried to be more consistent since I came here and have had ups and downs, but last year and the start of this year has been constantly very good for me.” – Kevin De Bruyne

“I’m going with the flow of the team. I feel really good after good preparation – physically and mentally I’m ready to play. I get a lot of confidence from the manager and the teammates around me.” – Kevin De Bruyne

Now you know all about Kevin De Bruyne’s net worth, and how he achieved success; let’s look at some of the success lessons we can learn from him:

1. Work hard for your dreams.

Work hard to make your dreams come true. No one is going to make things happen for you, so you have to take action and start accomplishing your goals now!

2. The ups and downs prepare you for the best that’s yet to come.

Having ups and downs is just part of life, and there is just no way around it. The only thing you can do is cherish the ups and learn from the downs. Eventually, all of your work will pay off and all your struggles will have been worth it.

3. Fight for what you want.

Don’t take no for an answer when it comes to making your dreams come true! If you want to achieve your goals, then anything is worth it and don’t let anything get in your way.

How much is Kevin De Bruyne worth?

Kevin De Bruyne’s net worth is estimated to be $60 Million.

How old is Kevin De Bruyne?

How tall is Kevin De Bruyne?

Kevin De Bruyne is a talented soccer player that has certainly made a name for himself in the industry. He is admired and respected by many and will most likely lead his team to many more victories in the future.

Being only 27 years old, Kevin De Bruyne’s net worth is already $60 Million and will continue to grow moving forward.

What do you think about Kevin De Bruyne’s net worth? Leave a comment below.