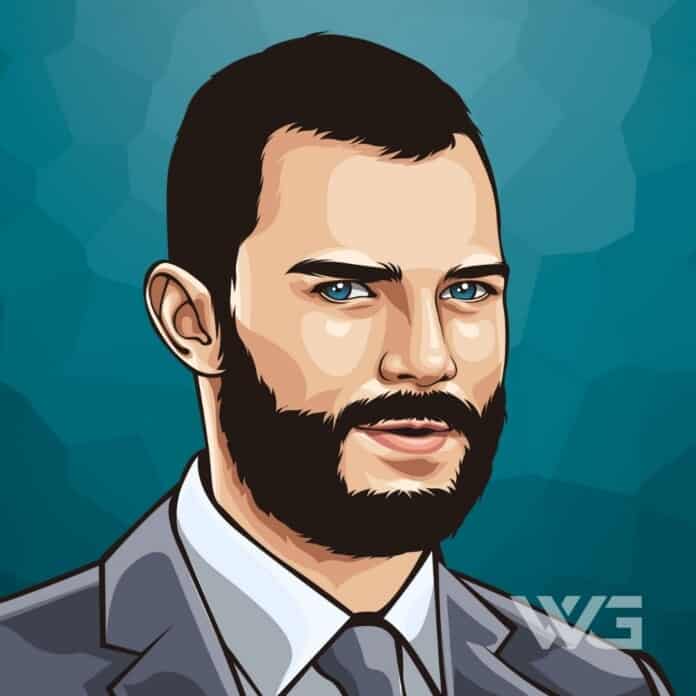 What is Jamie Dornan’s net worth?

As of February 2023, Jamie Dornan’s net worth is approximately $14 Million.

Jamie Dornan is an actor, model, and musician from Northern Ireland.

Dornan has appeared in campaigns for Hugo Boss, Dior Homme, and Calvin Klein. He was ranked one of the “25 Biggest Male Models of All Time” by Vogue in 2015. Dornan is also best known for starring as Christian Grey in ‘Fifty Shades of Grey’ franchise.

Jamie Dornan was born on the 1st of May, 1982, in Holywood, County Down, Northern Ireland. Dornan is the son of Professor Jim Dornan and Lorna.

Dornan spent much of his childhood years in the suburbs of Belfast. His mother died when he was 16 years of age. He attended Methodist College where he participated in the drama department.

Dornan started off his career as a model. In 2003, he modeled for Abercrombie & Fitch. Offers came rolling in for him as he modeled for various fashion houses and retailers, including Aquascutum, Hugo Boss, and Armani.

His first-ever acting role came for Sofia Coppola’s historical drama ‘Marie Antoinette’, in 2006. In it, he played the role of Count Axel von Fersen, the love interest of Marie Antoinette. In 2008, he was seen in the Hammer Horror production ‘Beyond the Rave’.

After ‘Fifty Shades of Grey’, Dornan was flooded with offers. In 2016 alone, he had three films slated for release. To start off with, he was seen playing Jan Kubiš in ‘Anthropoid’.

Here are some of the best highlights of Jamie Dornan’s career:

“I am never going to please all 100 million people who read the book. I’ll be lucky if half that number are happy with me playing Christian Grey. I know there are campaigns of hate against me already.” – Jamie Dornan

“It’s funny when you know you’re playing two characters and you’re aware of how you have to play each one into your performance of the other. You’re constantly at the back of your mind thinking and it all gets a bit confusing.” – Jamie Dornan

“I’ve always needed to bulk up, so until the modeling took off I was ramming Big Macs down my throat and doing plenty of bodyweight work. I’m over the Big Macs now, but I’ll still drop down and do my press-ups whenever I find the time.” – Jamie Dornan

“Because I used to play a lot of sport, I’ve always been in decent enough shape. When I used to get asked to do a bit of bodywork before a photoshoot I’d lie and say, ‘Yeah, I’m going to the gym.’ I literally never did anything.” – Jamie Dornan

“I’m not afraid to play the role of Christian Grey. Because I’m not like him. But I perfectly understand him. I never thought that he was a monster. He is simply woven from desires. As every one of us.” – Jamie Dornan

Now that you know all about Jamie Dornan’s net worth, and how he achieved success; let’s take a look at some of the best lessons we can learn from him:

It’s sometimes easier to help others rather than helping yourself. The trick is to listen to your “self” as a friend. This may be the simplest change you ever make in life, with the biggest impact.

YOU. ARE. PERFECT. You are. I’m talking to YOU. and don’t you dare think otherwise…embrace the entity of yourself…you are a puzzle piece and you are meant to be puzzling.

How much is Jamie Dornan worth?

Jamie Dornan’s net worth is estimated to be $14 Million.

How old is Jamie Dornan?

How tall is Jamie Dornan?

Jamie Dornan is a famous Northern Irish actor and model. The most successful film of his career so far has been ‘Fifty Shades of Grey’, released in 2015. Given his talent and dedication, Dornan sure has a promising future ahead.

What do you think about Jamie Dornan’s net worth? Leave a comment below.

What is Harry Kane's net worth? Introduction As of ,...