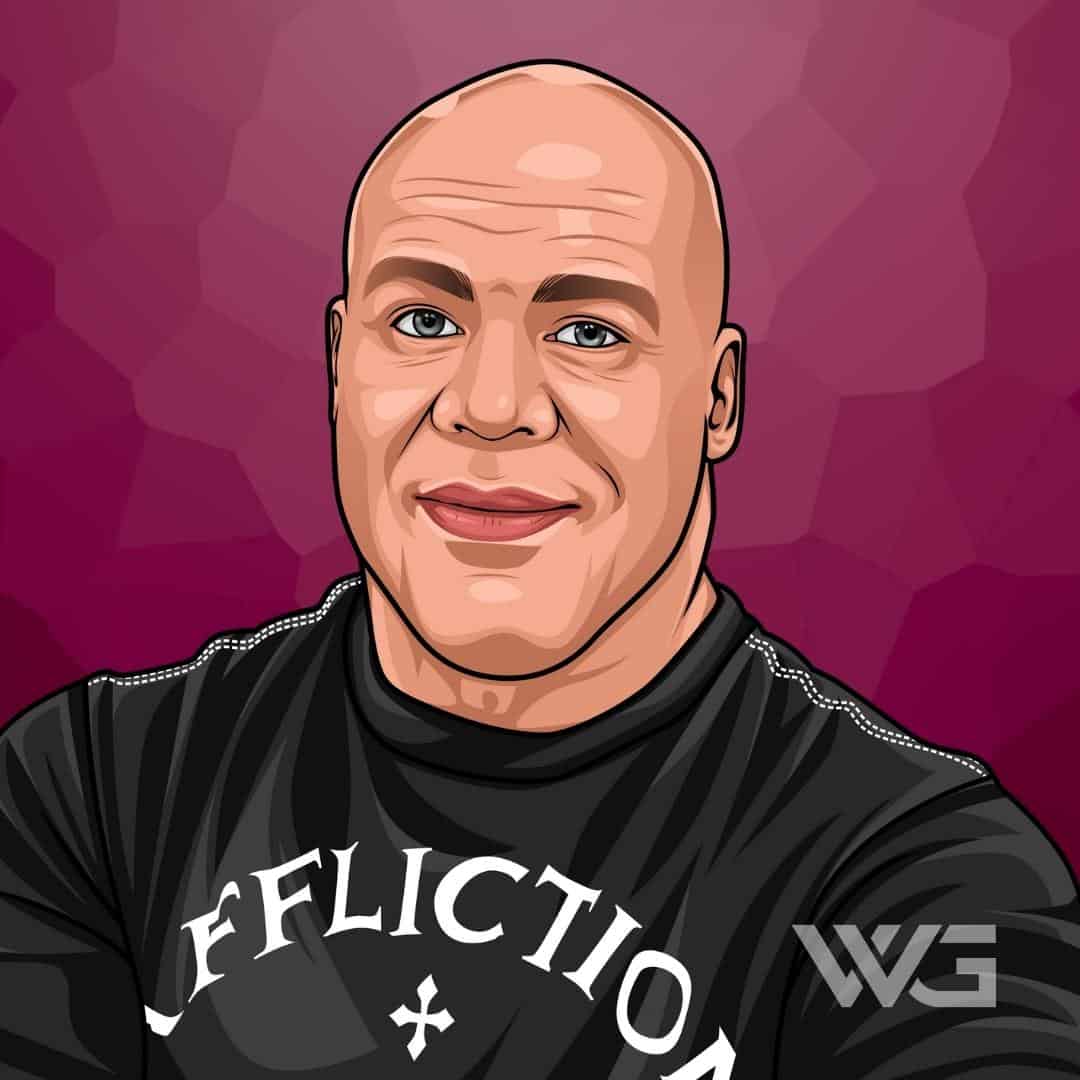 What is Kurt Angle’s net worth?

Having won over 20 championships over the course of his career, Kurt Angle has built a large net worth in the ring and become one of the wealthiest wrestlers in the industry.

As of February 2023, Kurt Angle’s net worth is estimated to be $5 Million.

Kurt Steven Angle was born December 9, 1968, in Pittsburgh, Pennsylvania, as the fifth son of Jackie and David Angle.

Angle’s father, a crane operator, was killed in an accident when Kurt was 16, leading him to regard his wrestling coach, David Schultz, as a father figure afterward.

After graduating high school, Angle attended the Clarion University of Pennsylvania, obtaining a degree in education in 1993.

Having wrestled since the age of seven, Angle continued wrestling after college, training with David Schultz with the prospect of heading to the Olympic games.

While Kurt Angle did end up participating in the 1996 Summer Olympics in Atlanta, Schultz ended up being murdered by John Eleuthere di Pont, a sponsor of his team, though no motive was ever discovered.

After winning the 1996 Olympic gold medal for freestyle wrestling, Angle joined the World Wrestling Federation, signing a five-year contract in 1998.

A year after signing with the WWF, Angle won both the European Championship and the Intercontinental Championship, followed by the King of the Ring tournament a few months later.

Kurt Angle has gone up against many other famous wrestlers while in the ring, including Triple H, Stone Cold Steve Austin, The Rock, The Undertaker, and Chris Jericho.

Angle was inducted into the TNA Hall of Fame in 2013 as the second wrestler to be inducted into both the TNA and WWE Halls of Fame.

Aside from his wrestling career, Angle has also pursued acting, making his film debut as a prison deputy in the short film “Chains” in 2008.

Kurt Angle is one of the richest wrestlers in the world, and his net worth is only getting larger.

While he’s never released precisely how much he makes yearly, we have some estimates based on public information.

He may not be the wealthiest wrestler in the industry, but Kurt Angle certainly isn’t hurting for money.

In 1998, Kurt Angle married Karen Smedley, and together the pair have two children, a daughter, Kyra, and a son, Kody.

After Kurt and Karen divorced in 2008, Angle was reported to be engaged to actress Giovanna Yannotti in 2010, with whom he has three daughters, Giuliana, Nikoletta, and Sophia.

Along with his social media, Angle also has his own official website where fans can find his podcast and autographed memorabilia.

Kurt Angle has won many awards throughout his wrestling career that set him apart from others in the sport.

Here are some highlights from Kurt Angle’s career:

How Does Kurt Angle Spend His Money?

Kurt Angle has more than enough money to buy almost anything he wants, but he lives a relatively low-key life and tends not to show off his wealth as much as other wrestlers.

While the home itself is 3,732 sqft, it is relatively average compared to some of the huge mansions other wealthy wrestlers have bought.

That said, we can’t really blame him for trying to live a quiet life after such an impressive career in the ring.

Kurt Angle has hit many milestones throughout his career, but some have stood out to fans more than others.

Here are some of the best highlights of Kurt Angle’s career:

Along with having a legendary wrestling career, Kurt Angle has said many notable things throughout the years.

Here are our favorite quotes from Kurt Angle:

Now that you know all about Kurt Angle’s net worth, we can look at what his impressive career can teach us about reaching our own goals.

Here are some of the best success lessons to learn from Kurt Angle:

If you’re going to be successful, you have to train yourself to never give up on anything, especially when the going gets tough.

Giving up is easy, but pushing through is the only way that you’ll ever find yourself on the road to success.

While it’s great to have one go-to thing that you’re best at, that can get old after a while and only gain you 15 minutes of fame at best.

To truly find success, it’s best not to put all your eggs in one basket and instead diversity and branch out whenever possible.

3. Believe In Your Abilities

If you don’t believe in your skills, you’ll hold yourself back, whether you want to or not.

While being confident in yourself is easier said than done, it is something you must master if you want to realize your full potential.

Kurt Angle is a legend in the wrestling industry, and while he doesn’t fight in the ring anymore, he still hasn’t entirely stepped away.

Due to his sporadic appearances on WWE and his continued ventures in film and television, we expect Kurt Angle’s net worth to continue increasing steadily.

Be sure to check back often to stay up-to-date on this former wrestler’s growing fortune!

As of February 2023, Kurt Angle’s net worth is estimated to be $5 Million.

What do you think about Kurt Angle’s net worth? Leave a comment below.