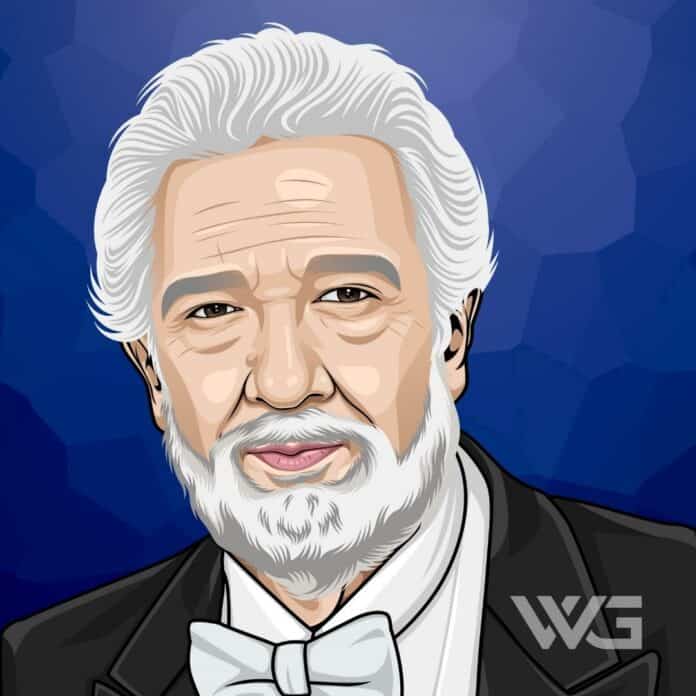 What is Plácido Domingo’s net worth?

Plácido Domingo is a Spanish opera singer and conductor who has recorded over 100 operas throughout his career in a variety of languages.

In addition to his work for classical music lovers, Domingo has enjoyed success through his pop cross-over albums and singles, selling millions of copies worldwide.

As of January 2023, Plácido Domingo’s net worth is estimated to be $300 Million.

José Plácido Domingo Embil was born 21 January 1941, in the Retiro district of Madrid, Spain, gaining a complex grasp of music from an early age.

After moving to Mexico for his father’s zarzuela troupe, he began studying the piano and was entered into singing contests for boys by his parents.

He later attended the National Conservatory of Music in Mexico City, receiving voice training from Carlo Morelli and paving the way for his professional singing career.

Plácido Domingo made his debut in 1961 performing La Traviata, the success of which led to his performance at the New York City Opera in 1965.

As his fame grew, Domingo performed worldwide at many major opera houses, including at the Washington National Opera and the Mexico National Opera, gaining many fans, including Mick Jagger, frontman for the Rolling Stones.

By the 1990s, Domingo had teamed up with José Carreras and Italian Luciano Pavarotti to form The Three Tenors, their albums selling millions of copies globally.

He has performed at a variety of high-profile events, including to some of the richest soccer players in the world at the FIFA World Cup Final in 1990.

Domingo has also been involved in several movie projects, making a guest appearance on the Bill Cosby hit comedy series, The Cosby Show.

His cultural impact has also been extensive, with many references to Plácido Domingo, for example, in the Ray Romano comedy series, Everybody Loves Raymond.

Plácido Domingo has enjoyed a hugely successful career as one of the richest singers in the world, with career earnings to match his fame.

His album sales have brought in millions of dollars yearly in royalties and fees for live shows and operas.

Recent booking fees for an appearance from Domingo start from $500,000 to $750,000, securing his ongoing high income.

Plácido Domingo’s net worth has continued to increase over time, with many best-selling opera albums to his name and performances at some of the world’s biggest opera houses in the world.

At the height of his fame, Domingo’s high earnings and real estate investments boosted his net worth significantly into its current high range.

His work as opera director at the Los Angeles Opera, combined with movie and television appearances, will see his net worth continue to climb.

He is also an avid supporter of one of the richest soccer teams in the world, Real Madrid, which is based in his hometown.

Plácido Domingo keeps his fans in the loop through his official Instagram account about his professional and personal life.

With dozens of recordings and live opera performances over the years, Plácido Domingo’s list of awards and achievements is exemplary.

He has won many Grammy Awards and honors from various governments and music organizations worldwide.

Here are some of the most notable awards and accolades from Plácido Domingo’s career:

His continued involvement in the opera world and work in various other entertainment fields will see his list of awards grow moving forward.

How Does Plácido Domingo Spend His Money?

Plácido Domingo’s real estate investments are spread worldwide, with the opera star owning properties in the most expensive cities in the world, including an apartment in New York.

Additional residences include a house in Madrid, a vacation home in Acapulco, and a condominium in downtown Los Angeles.

He also has an impressive watch collection featuring some of the most expensive watches in the world, including a vintage platinum Rolex watch.

Plácido Domingo’s career has seen the iconic opera star working with some of the greatest musicians and composers in the classical music world.

He has also branched out into different musical genres and other entertainment mediums with huge success.

Here are some of the best highlights of Plácido Domingo’s career:

We can expect more great moments from his already astonishing career to come as he continues to sing and collaborate with other artists.

With a career spanning many decades and a long list of successes to his name, Plácido Domingo has spoken about his craft on many occasions.

His reflections on the opera world and other musical activities offer unique insights into the mind of a truly gifted singer.

Here are our favorite quotes from Plácido Domingo:

Now that you know all about Plácido Domingo’s net worth let’s examine some of the lessons we can learn from his prolific career as an internationally famous singer.

Here are some of the best success lessons to learn from Plácido Domingo:

1. Spend Time With Loved Ones If You Want To Find Happiness

With his packed schedule in the recording studio and opera houses, Domingo understands the importance of setting aside time for friends and family.

Even when traveling the world, he ensures he has his loved ones close by so he can spend quality time with them.

2. If All Else Fails, Smile

One of the most characteristic traits of Plácido Domingo is his broad smile, reflecting his energy and generosity in one simple expression.

3. Dream Big, However Old You Are

Domingo’s boundless energy and enthusiasm have remained constant throughout his life, beginning with his years in Mexico and continuing to his later period of life.

Even in his 70s, Domingo remained enthusiastic about career goals and dedicated to accomplishing much more in life.

That concludes this exploration of opera singer Plácido Domingo’s net worth, covering his early life and outstanding career in the operatic world.

Domingo continues to work as a singer while expanding his activities as an opera company director, with more operas and shows in the pipeline.

As his net worth continues to change, we’ll update this article to cover the latest details and career developments in the future.

As of January 2023, Plácido Domingo’s net worth is estimated to be $300 Million.

What do you think about Plácido Domingo’s net worth? Leave a comment below.

What is Chris Hemsworth's net worth? Introduction  As of ,...