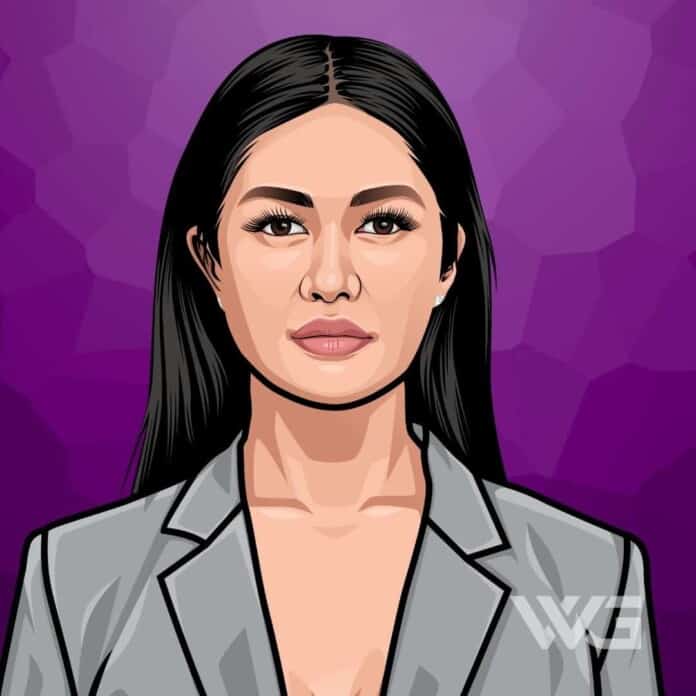 What is Kim Lee’s net worth?

Kim Lee is a self-made millionaire. Lee used to be a model, appearing in several music videos from the likes of Kanye West and Nicki Minaj.

Lee makes the most of her fortune from traveling the world for various gigs. She has appeared as a model in music videos for artists like Nicki Minaj. She played films and shows like ‘The Hangover Part II’ and ‘CSI: Crime Scene Investigation.’

Kim Lee was born on the 22nd of May, 1988, in California. She has opened up to fellow co-stars Kane and Kevin in ‘Bling Empire’ about her family life. She explained that her father asked her who she wanted to live with, and she picked her mother.

Lee was raised by her mother and her stepdad Daniel Segal. Segal is a successful novelist and screenwriter in Orange County, California. Lee planned to track him down in hopes of reconnecting. Her biological father, Tony Lee, passed away two years before filming the show.

Lee has a reputation as “the Calvin Harris of Asia”. Before she ventured into the world of DJing, she was actually a model. Lee walked on several runways, including Los Angeles, Paris, and New York Week shows. She has worked with designers such as Marc Jacobs, and she appeared on the international covers of fashion magazines like Esquire and GQ.

She was also named the “Sexiest Woman in the World,” according to Elite Daily in 2011. Lee appeared in several hip-hop music videos, including those of Kanye West, Far East Movement, and Lupe Fiasco.

Lee had plenty of on-screen moments appearing in the likes of ‘The Hangover Part II,’ ‘Entourage,’ and ‘CSI.’ As for reality shows, ‘Bling Empire’ isn’t her first gig either as she previously went on ‘The Amazing Race’ in Vietnam in 2013. She has been the host of ‘Yo! MTV Raps’ on MTV Asia.

In 2012, Lee caught the attention of Black Eyed Peas after bonding with them over a night of partying. After that, one of her mixes featuring Kanye West went viral. She has been a successful DJ ever since.

How Does Kim Lee Spend Her Money?

Kim Lee spends her money on vacations, clothes, and shoes.

Lee loves to travel around the world on various gigs, and that can cost a fortune. She has been seen in a Malibu home alongside her parents, Kimmy and Dan Segal. The 5-bedroom, 4-bathroom, 3,085-square-foot Mediterranean-style villa was built in 1929 on over an acre of property.

Lee owns plenty of designer clothes in her wardrobe, both in shoes, handbags, and clothes.

Here are some of the best highlights of Kim Lee’s career:

“I feel like music is changing; dance music had its run, it’s going into hip-hop. This show actually helps people understand what Asian hip-hop is about. China has The Rap of China. Korea has Show Me the Money. On YO! MTV Raps, it’s different cultures from all over Asia coming together — the best of the best, and that’s very powerful.” – Kim Lee

“A ball of energy. I have energy, I talk a lot, [but] he talks more than me! He’s really witty, and he’s got a great sense of humor, good personality. He lights the room up, he makes everybody laugh, he talks to everybody. I’d asked him, ‘When are you going to run out of energy?” – Kim Lee

“I really suck with bowling, to be honest with you, but then when I met Jay, I was really confident, just joking around saying, “Hey, I’m gonna beat you.” And I really did. I really killed him in bowling.” – Kim Lee

“I already have a lot of Asian rapper friends, but I didn’t realize Malaysia has such a big hip-hop scene there. Same with Thailand. I was just blown away [with] the energy during the Cypher [the closing segment hosted by Malaysian rapper Joe Flizzow.” – Kim Lee

‘When are you going to run out of energy? Like, ever?’ It’s great because it was hard work for everybody on set, so he was just like the little energy bunny running around, like ‘Hey, hey, hey!’ His energy definitely rubbed off on people.” – Kim Lee

Now that you know all about Kim Lee’s net worth and how she achieved success; let’s take a look at some of the lessons we can learn from her:

1. Be Careful What You’re Saying

Consider your words carefully. Use them for good rather than harm. Once they are out, you can’t take them back.

A life full of complications, obligations, and an overwhelming schedule makes life more difficult and stressful.

You worry about “what ifs” that aren’t real, and the worry itself creates stress and physical symptoms that cause real reason for angst.

How much is Kim Lee worth?

Kim Lee’s net worth is estimated to be $500 Thousand.

How old is Kim Lee?

How tall is Kim Lee?

Kim Lee is an Asian-American DJ, actress, and model. Lee has been referred to as the “Asian Kim Kardashian“. Lee is a successful DJ but is probably best known for being a cast member on the Netflix show ‘Bling Ring’ in 2021.

She was born in Orange County, California. In the early 2000s, she pursued a career in modeling, even appearing on runways for designers like Marc Jacobs at shows in New York and Paris.

Lee has landed a small role in ‘The Hangover II’ and she also appeared in music videos for Kanye West, Nicki Minaj, and Katy Perry.

What do you think about Kim Lee’s net worth? Leave a comment below.