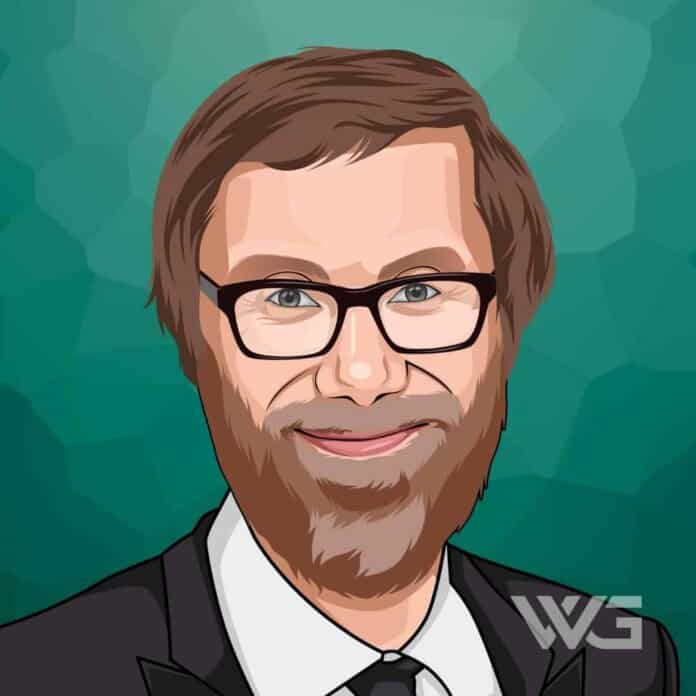 What is Stephen Merchant’s net worth?

As of November 2022, Stephen Merchant’s net worth is approximately $40 Million.

Stephen James Merchant was born on the 24th of November, 1974, in 1974 in Hanham, Bristol. Merchant is the son of nursery nurse Jane Elaine and plumber and builder Ronald John Merchant.

Merchant was a former film reviewer on the student radio station Radio Warwick, where he began his broadcasting career.

Merchant began his career performing stand-up comedy at Bristol’s Comedy Box, where, he recalls, “The first week I did really well. The second week I died on my arse. I realized that stand-up was not that easy after all.”

He met Ricky Gervais for the first time in 1997, when Gervais (in the position Head of Speech at the London radio station XFM London), hired Merchant as his assistant. Gervais later said that he had called Merchant for an interview because it was the first CV handed to him.

In mid-2001, BBC Two aired the first series of ‘The Office’, co-written and co-directed by Merchant and Gervais and starring the latter as paper sales office manager David Brent; the show initially received low ratings. Beginning in September 2001, Merchant and Gervais returned to XFM as co-hosts of ‘The Ricky Gervais Show’.

In 2007, he began hosting his own radio show on BBC 6 Music, airing weekly on Sunday afternoons. Instead of comedy, The Steve Show focused on music and particularly “new music”, defined by Merchant as “music you’ve not heard before.”

Here are some of the best highlights of Stephen Merchant’s career:

“You can only be embarrassed if you allow yourself to be embarrassed. If you embrace it and just accept that you’re kind of a klutz, and you’re able to make it into comedy gold.” – Stephen Merchant

“My twitter fans are all pretty weird. A lot of them are kind of weirdly sexually aggressive. Some of them made me laugh and then I instantly tried to forget them because I’d hate to find myself in a bar kind of drunk and accidentally use one.” – Stephen Merchant

“Even here in California with more contemporary buildings. I have a real problem with low doorframes. It’s a curse! That’s just another of the many problems I have to live with.” – Stephen Merchant

“When I get hired as an actor as opposed to a writer, one of the things that are exciting for me is doing stuff I wouldn’t normally do myself. So whether it’s a kid’s movie or a voice in animation or in this case – where I just get to be silly, it’s a different kind of comedy for me. As a performer, it’s a different pleasure than when you’re writing or directing. As a performer, you’re just in the hands of the director and you go with whatever they want to do.” – Stephen Merchant

“The reason I keep talking about a wife and saying the word wife on stage is because it seems a funny word to me. The more you say it, the more it seems to detach from that person and become this sort of abstract thing: that you would set out to find a wife, that it would be an objective like buying a new car.” – Stephen Merchant

Now that you know all about Stephen Merchant’s net worth, and how he achieved success; let’s take a look at some of the lessons we can learn from him:

Life’s magic and beauty do not lie in your ability to get all that you want, whenever you want it. Life’s truest, miraculous, nature reveals itself when you are given all that you need, exactly at a precise moment in time, when you need it the most.

2. Learn To Face The Problems

If we learn to cross them properly, the rivers that we cry can lead us to oceans of invincible happiness.

Everyone has a reason for saying or doing what they do.

So, don’t judge people without knowing their story. You don’t have to agree with them at all, but don’t judge them, don’t label them. Let them just be. If they interfere in your life, draw a line and tell them to step back.

How much is Stephen Merchant worth?

Stephen Merchant’s net worth is estimated to be $40 Million.

How old is Stephen Merchant?

How tall is Stephen Merchant?

Stephen Merchant is one half of the creative duo (with Ricky Gervais) that created, wrote, and/or starred in the British shows “Extras”, “The Office”, and “The Ricky Gervais Show”.

As of November 2022, Stephen Merchant’s net worth is roughly $40 Million.

What do you think about Stephen Merchant’s net worth? Leave a comment below.