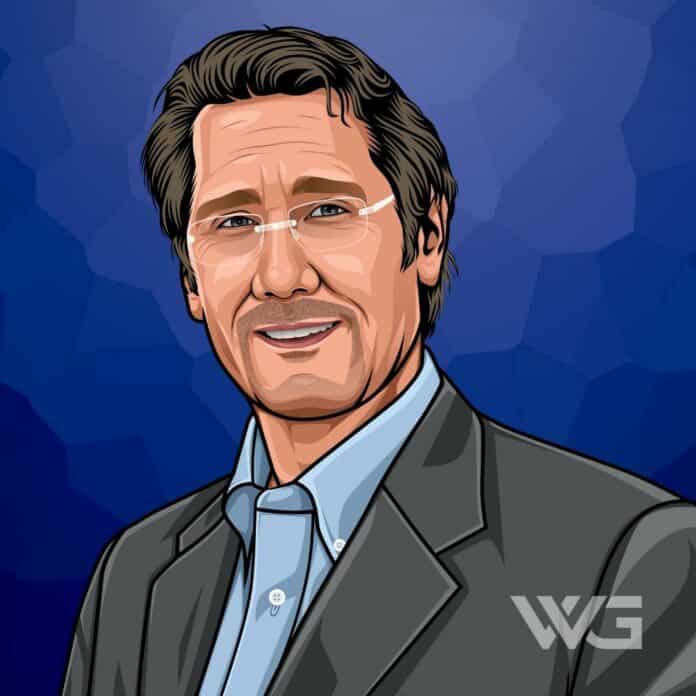 What is Tony Hulman George’s net worth?

Tony Hulman George is an auto racing executive who was the Chairman, CEO, and President of Indianapolis Motor Speedway Corporation.

During his time as president, he started to allow NASCAR to race at the Speedway as well as the IROC and Formula 1 races.

Not only did he make a name through the Indianapolis Motor Speedway Corporation, but he also became President of Hulman and Company, founding the Indy Racing League.

Most of his wealth has come from his incredible work in the racing industry but he was entrusted with his father’s businesses.

As of February 2023, Tony Hulman George’s net worth is estimated to be $200 Million.

Tony is the grandson of Herman Hulman, who bought the Indianapolis Motor Speedway at the end of World Wall II.

Because his family was involved with motor racing, it was almost inevitable that he would end up following his grandfather’s path.

He has three sisters, Josie, Kathi, and Nancy, all of whom  became Speedways directors, but they have no direct management duties in the day-to-day running of the company.

He attended Terre Haute Schulte High School and graduated with a bachelor’s degree in business administration from Indiana State University in 1983.

Before starting his career in racing, Tony attended a racing school and made his debut at the USAC Pro-Ford championship.

At the age of 20, he had already made his first attempt at the Indy Lights Championship. He didn’t go far with his racing career as he was only placed in the top ten five times, before venturing onto other opportunities.

After putting his racing career aside, he was soon made CEO, Chairman, and President of the Indianapolis Motor Speedway Corporation.

He started overseeing new projects that would help improve the speedway and looked at ways to increase revenue.

The Indianapolis 500 had only one race up until he decided to change everything by announcing that NASCAR would be added to the Speedway schedule.

In 2008, The Speedway was able to host its first MotoGP event, but this was, unfortunately, very unsuccessful.

Tony decided to resign as Chairman, CEO, and President of the Indianapolis Motor Speedway and Hulman and Company in 2009, due to the companies not making enough profit.

He also resigned from the board of directors in 2010 but became the director of Hulman and Company once again in 2011.

Since then, he has continued to be the director of Hulman and Company and it is assumed that he will continue to do so up until retirement.

Tony is rightfully proud that the Indy 500 has been host to some of the top talents in racing, including Carl Edwards, Cale Yarborough, Dale Earnhardt Jr., and Danica Patrick, one of the best female racing drivers of recent history.

Tony has earned a huge amount of money from his involvement in motorsport management.

However, his fortune received a huge boost when his father’s shareholding was transferred to him.

While Tony has managed to generate huge interest in motorsport through his spectacular plans, they do not always live up to expectations.

Despite that, he’s still managed to increase his fortune while steering a sometimes rocky business path.

Given his background in motorsport and speedway heritage, it was almost inevitable that Tony would earn his fortune on the track.

With his personal finances making a huge bump with his father’s inheritance, most of his wealth is tied up in the Speedway and Hulman company stock.

Here’s a breakdown of Tony Hulman’s annual net worth:

The companies in which he is currently invested are doing well and it looks like Tony’s luck has changed as far as profitability is concerned.

With a good management team to assist him, Tony is sure to increase his wealth substantially over the coming years.

Tony married Lisa Dawn in 1983 and the couple went on to have a child, Anton Hulman George Jr., who will not get to enjoy the benefits of the Speedway ownership now that it’s been sold.

Unfortunately, the couple filed for divorce once Tony’s use of cocaine and marijuana was revealed, but he wasn’t long in moving on as he started a new relationship.

The divorce was finalized in 1989, and shortly after, Tony got engaged to his second wife, Laura. The couple married later in 1989 and Laura Livvix and Tony had a daughter named Lauren.

His second wife, Laura, has a son named Edward from a previous marriage whom Tony likes to treat as his child and has spoken of building an ice skating rink for him to help advance his hockey career.

Tony’s family has been involved in motorsport for so long that his family and he are recognized for their contribution to motor racing in the United States.

Tony’s own achievements are somewhat less spectacular, but nonetheless, he’s achieved a lot with his entrepreneurial talents.

Here are some of the more memorable moments from Tony Hulman George’s career:

Tony has not always had an easy ride at the Speedway, as the changing tastes of race fans saw a move towards NASCAR and away from the somewhat unsuitable road surface.

This influenced the profitability of the Speedway and contributed to Tony’s resignation from his operational roles.

How Does Tony Hulman George Spend His Money?

Tony is heavily invested in real estate, with his current house being a mansion worth over $40 million.

His home is located in San Francisco but he has various other properties dotted all across America.

He naturally loves fast cars and has some of the most expensive cars in the world in his garage.

Top-end Chevrolets score high on his list of personal cars, not too hard to understand given the number of Indy 500 pace cars over recent years.

Despite his problems, Tony introduced new blood into the Speedway schedule, which did bring in the crowds.

The golden days of the Speedway may be over, but Tony is still confident that the track will keep the fans coming back.

Here are some of the best highlights of Tony Hulman George’s career:

Tony stepped down from his role as CEO due to allegations of a conflict of interest due to his various investments and renovations at the Speedway. His mother took over as CEO and Chairman, but following her death, Tony was reinstated.

However, it wasn’t long before the board realized that the Hulman family had taken the Speedway as far as it could go and needed a new perspective. This was when they decided to sell the Indianapolis Motor Speedway and the NTT IndyCar Series to Roger Penske for an undisclosed amount.

Tony George’s whole life has been involved in running motorsport events. He either participated in them as a driver or was involved in organizing them as head of the corporation.

He took his role as steward of his grandfather’s iconic race track very seriously and all his efforts were aimed at bringing it up to the required standard to compete with the best tracks in the world.

In the end, however, he was not able to make it the financial success he expected and it was evident to the family that someone new would be better suited to run the company.

Here are our favorite quotes from Tony Hulman George:

“I don’t think we can solve all the big issues in a short period, certainly not by 2007.” – Tony Hulman George

Tony Hulman George is a traditionalist who is hell-bent on keeping his grandfather’s dream alive.

To this end, he does what is best for the company, even stepping down when he realized that he was not the best man for the job.

1. Do What’s In The Best Interest Of The Company

Tony made the company his priority, no matter the backlash he received for those choices.

2. Slow And Steady Wins The Race

He never went headfirst into a decision, taking his time to make sure that the decision would improve the company in as many ways as possible.

3. Do What Is Right For You

Tony had a lot on his plate with both companies and knew that the best possible decision was to step back from day-to-day operations. This was not only in the best interests of the company, but also for him.

Some may compare Tony to his incredibly successful grandfather, but you cannot take away the fact that Tony had a fairly successful career in his own right.

His entrepreneurial skills took him far and saved him in many ways. He is now living a life that is more comfortable for him with his position as a director of Hulman and Company.

Tony is currently enjoying his new-found freedom with his family while quietly making plans for the future of the company.

As of February 2023, Tony Hulman George’s net worth is estimated to be $200 Million.

What do you think about Tony Hulman George’s net worth? Leave a comment below.