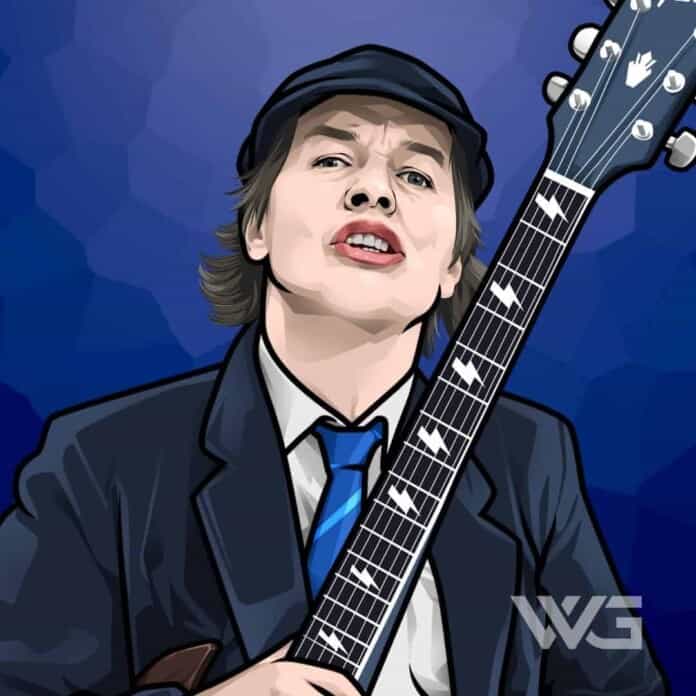 What is Angus Young’s net worth?

Angus Young is an Australian guitarist and songwriter best known for his playing with the Australian hard rock band AC/DC.

Regarded as one of the greatest guitarists of all time, his albums released through AC/DC have sold hundreds of millions of copies worldwide, with songs featured in dozens of movies.

Born on March 31st, 1955 in Glasgow, Scotland, Angus McKinnon Young was raised by his housewife mother and father William, who served in the Royal Air Force during World War 2.

The youngest of eight children, Angus moved to Australia with his family where he attended Ashfield Boys High School.

After learning to play the banjo, he picked up an acoustic guitar followed by a Gibson SG, and he has stuck with this model throughout his career.

Angus Young’s career began in the early 1970s when he joined the Marcus Hook Roll Band, eventually forming AC/DC with his brothers Malcolm and George.

After considering costumes based around Spider-Man and Zorro, he settled for the iconic schoolboy outfit for which he is known to this day.

The band released their debut album, High Voltage, in 1974, following it up with TNT, which was certified platinum nine times in Australia.

Their 1979 album, Highway to Hell, saw the band breaking into the American charts, with the follow-up album Back In Black becoming one of the best-selling albums of all time, surpassed only by Michael Jackson’s Thriller.

AC/DC music has been featured on many movie soundtracks, including Thunderstruck in Deadpool 2 starring Ryan Reynolds, and Highway to Hell in the Jack Black movie, School of Rock.

The track T.N.T. was featured in Talladega Nights, the hit comedy starring Will Ferrell and John C. Reilly and directed by Adam McKay.

Angus Young’s impressive net worth has largely come through royalties from the sale of AC/DC albums, most notably from Back In Black.

In 1975, it’s estimated that Young earned $350,000 from sales of High Voltage, with an additional $3 million the following year once the album sold 3X platinum in the US.

His current annual income is estimated at around $15 million from combined royalties and other revenue sources.

As one of the richest rockstars in the world, Angus Young has enjoyed a continuing increase in his overall net worth.

He’s currently the richest member of the band AC/DC, with his brother Malcolm and Brian Johnson worth an estimated £100 million, compared to his $160 Million.

As their albums continue to sell in high numbers and give out royalties, it’s expected that Angus Young’s net worth will continue to grow over the coming years.

Angus Young began a relationship with Ellen Van Lochem in 1979, marrying six months later and establishing homes in Australia, the Netherlands, and the UK.

Known for his chain smoking and teetotaler lifestyle, Young would often be seen drinking a glass of coffee or chocolate milk when his fellow band members were drinking alcohol.

In 2019, Young donated nearly $20,000 to the Alzheimer’s Society of Ontario, in honor of his brother Malcolm, who had died from dementia two years before.

Angus Young’s career is one of many high points, with the huge success of AC/DC earning him and his fellow band members dozens of accolades over the years.

Here are some highlights from Angus Young’s career:

How Does Angus Young Spend His Money?

Angus Young is known for his collection of instruments which includes some of the most expensive guitars in the world, as well as the signature guitar created for him by Gibson.

Along with his wife, he owns a three-story mansion in Aalten, the Netherlands, which includes multiple guest rooms and its own recording studio.

The couple also owns a luxury home in the Kangaroo Point area of Sydney, a suburb of New South Wales.

With a career beginning in the 1970s and including over a dozen hit albums, Angus Young has enjoyed many successes and high points.

Here are some of the best highlights of Angus Young’s career:

Angus Young has plenty of unique insights into the nature of the music industry and the creative process he goes through when composing his music.

Here are our favorite quotes from Angus Young:

Now that you know all about Angus Young’s net worth, it’s time to dig into some of the valuable lessons we can learn from his experiences in the music industry.

Here are some of the best success lessons to learn from Angus Young:

1. If All Else Fails, Stick To What You Do Best

Angus Young has often spoken about the criticism the band gets for sticking to a familiar sound, but believes you should do what you do best if it works for the audience.

Throughout his career, Angus Young has had to deal with the loss of more than one fellow band member.

The death of his brother, Malcolm, as well as the original lead singer Bon Scott, taught him the importance of moving on when faced with the loss of a loved one.

3. Surround Yourself By Talented People

Growing up in a household of musically gifted people helped inspire Angus to become the accomplished guitarist he is today.

Surround yourself with talented people who help you to channel your energy into the creative process.

That concludes this guide to Angus Young’s net worth, and the hit singles and albums he released with AC/DC that helped make him a legend of rock.

With some of the biggest-selling releases in the history of music to his name, he’s become one of music’s true icons.

Since he continues to receive royalties from his albums, we’ll be updating this article in the future to make sure it reflects his current net worth.

What do you think about Angus Young’s net worth? Leave a comment below.