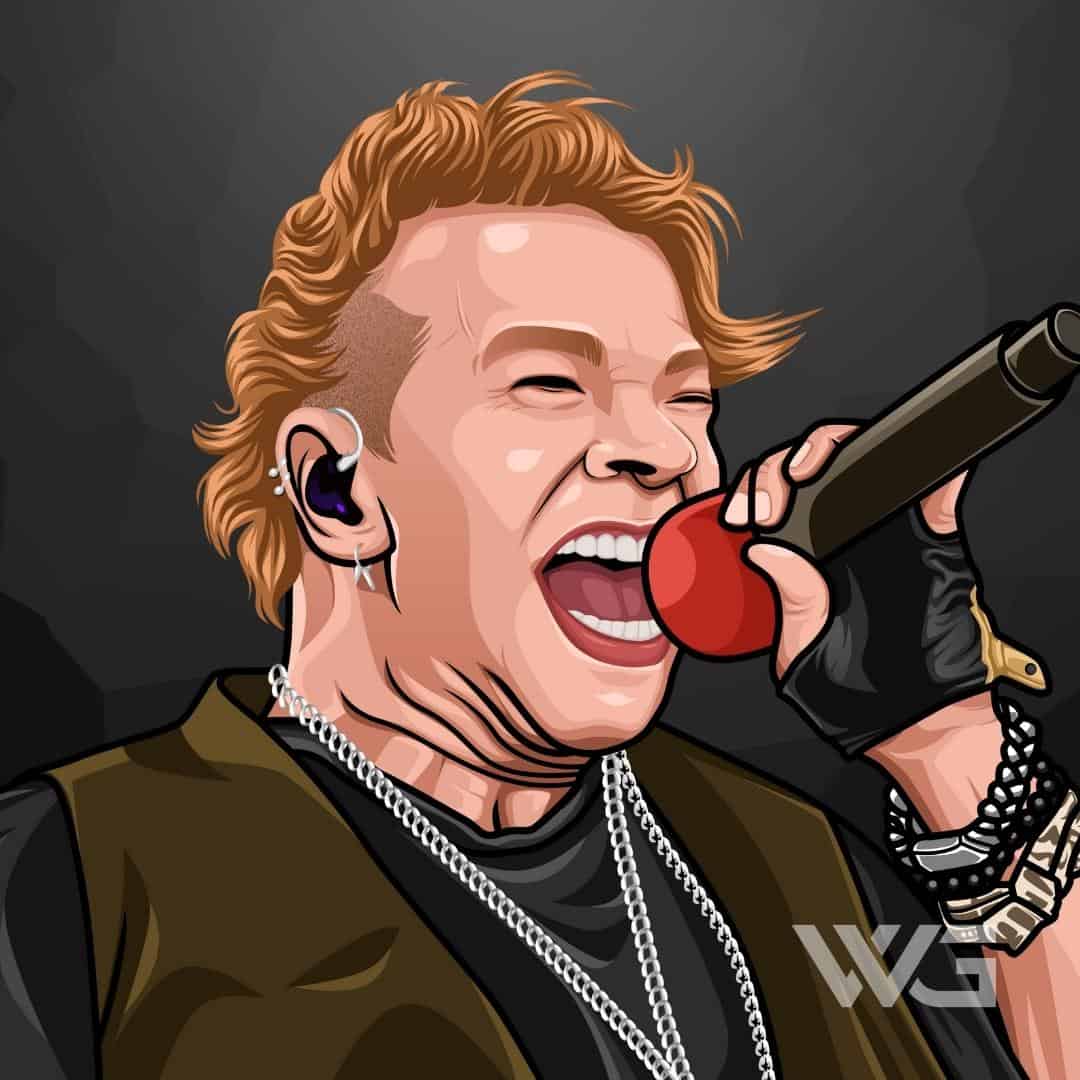 What is Axl Rose’s net worth?

Axl Rose is an American musician and singer-songwriter, known for being the founding member and frontman for the hard rock band Guns N’ Roses.

Their singles and albums have sold millions of copies, while the band’s stadium tours have frequently sold out around the world.

William Bruce Rose Jr was born on February 6th, 1962, in Lafayette, Indiana, to his 16-year-old mother Sharon and gather William Sr, with the couple separating when he was two years old.

His mother remarried to Stephen L. Bailey, changing Rose’s name to William Brush Bailey, giving him a religious upbringing at a Pentecostal church.

As a child, Rose sang in the church choir, studying the piano, and joining the school chorus while at high school.

His musical influences at the time were varied, and included Elton John, Michael Jackson, and Elvis Presley.

When Rose learned about his biological father, he changed his name unofficially to W. Rose, and during this period of time often became caught up in crime.

After multiple run-ins with law enforcement, Axl Rose decided to head to Los Angeles and work on his band AXL.

Along with fellow band members Duff McKagan, Steven Alder, and Slash, the band released their debut album, Appetite for Destruction, which sold over 30 million copies worldwide.

Their tours frequently sold out, and Guns N’ Roses also played alongside other huge metal acts, including the James Hetfield-fronted band Metallica.

The only member of Guns N’ Roses to have remained with the bans since its creation, Axl Rose, continues to work with the band, touring in 2017.

Axl Rose has maintained a consistently high income over several decades thanks to ongoing record sales and the sell-out tours with Guns N’ Roses.

As one of the richest rockstars in the world, Axl Rose has seen his overall net worth continue to increase over the years.

The late 1980s saw the first notable increase in his net worth, as Guns N’ Roses began to find their fanbase and go on sell-out tours.

This continued throughout the 1990s, with the Use Your Illusion albums and associated tours earning Rose tens of millions of dollars that decade.

Rose’s net worth continues to climb thanks to ongoing royalty payments, while the band’s 2017 to 2018 tour generated more than $430 million worldwide.

Axl Rose first began dating model Erin Everly in 1986, and the couple were married in 1990 in a ceremony in Las Vegas.

Everly eventually left Rose after an altercation with the rock star, and their marriage was annulled in January 1991.

Rose was rumored to have dated Lana Del Ray, as well as having a relationship with the supermodel Stephanie Seymour.

With a string of best-selling albums and singles to his name, Axl Rose has received numerous award nominations and wins over the course of his career.

Here are some highlights from Axl Rose’s career:

How Does Axl Rose Spend His Money?

With his impressive net worth, Axl Rose has been able to live a life of luxury, owning a 4,333-square-foot residence in Malibu, California.

At the height of the band’s fame, they gained a reputation for trashing some of the most expensive hotels in the world, often causing thousands of dollars in damage.

He also owns some of the most expensive cars in the world, notably a custom Porsche 918 Spyder with a cool black matte finish.

With multi-platinum-selling albums and singles to his name, Axl Rose has enjoyed a hugely successful career in the music industry.

Here are some of the best highlights of Axl Rose’s career:

An outspoken public figure who has openly discussed his views on politics and celebrity, Axl Rose has plenty of insights to share with his fans.

Here are our favorite quotes from Axl Rose:

Now that you know all about Axl Rose’s net worth. let’s take a look at some of the valuable insights into life and the creative process we can learn from his impressive career.

Here are some of the best success lessons to learn from Axl Rose:

1. Take On Responsibility When It Matters

Early in the band’s career, fans would often become unruly during their performances, in one instance even leading to two deaths.

Rose refused to sit back and let things unravel and would often step up and call out the bad behavior directly, coordinating with the security team to remove bad actors.

2. If You Have Something To Say, Say It

While many bands hang up their instruments after a relatively short career, Guns N’ Roses returned to put out their Chinese Democracy after a long spell in the musical wilderness.

If you have creativity within you, don’t be afraid to put it out in the public eye for all to see.

3. Focus On Collaboration Rather Than Dictating To Others

In the 1990s, Axl Rose made the mistake of taking over control of the band to the point where the other members felt detached from the creative process.

Take a more democratic and collaborative approach, as you never know when someone else might have a great idea.

That concludes this overview of Axl Rose’s net worth, covering the career highlights and successful records and tours.

One of the most iconic hard rock singers of all time, Rose helped to forge a distinct musical style and changed the shape of rock forever.

Be sure to check back on this article at a later date, as we’ll be updating it to include any new information about Axl Rose’s net worth.

What do you think about Axl Rose’s net worth? Leave a comment below.