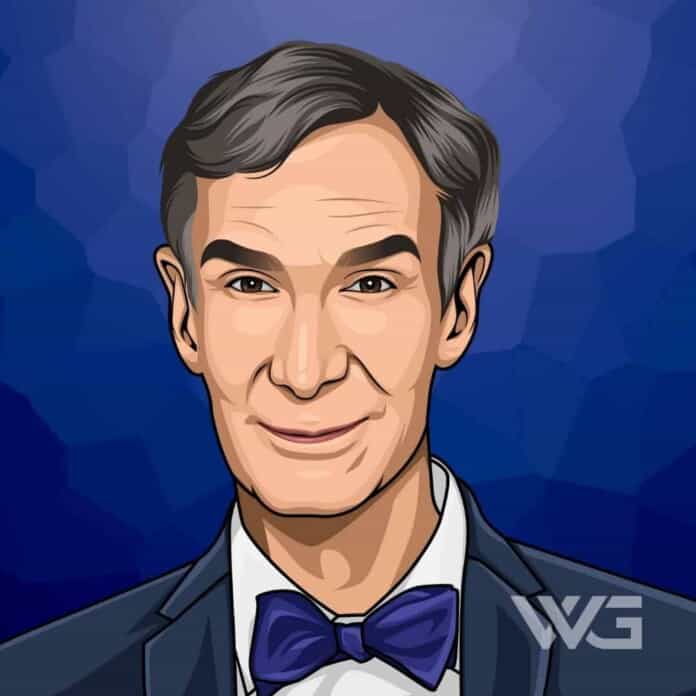 What is Bill Nye’s net worth?

Famously known for his character ‘Bill Nye The Science Guy’, he has dedicated his career to educating the general audience on how science affects our day-to-day lives.

William Sanford Nye was born on November 27, 1955, in Washington D.C. to his parents Jacqueline and Edwin Nye. Both his mother and his father were World War II veterans.

He attended Lafayette Elementary School followed by Alice Deal Junior High and eventually enrolled in Sidwell Friends on a scholarship for his high school education.

Later he relocated to Ithaca, New York and attended Cornell University and graduated in 1977 with a bachelor’s degree in mechanical engineering.

After graduating, he worked as a mechanical engineer at the Boeing Corporation near Seattle, Washington. There, he built a hydraulic resonance suppressor that continues to be used to this day.

While working a day job, Bill began working as a standup comedian, and eventually he became one of the writers and performers on ‘Almost Live’.

In 1991 he began working on the set of the animated series ‘Back to The Future,’; and after the show became popular, he got his very own educational televised program: ‘Bill Nye The Science Guy’.

The show aired for about five years and had 100 episodes in total.

In 1998 he played a role on a Disney movie ‘The Principal Takes a Holiday’, and in the 2000’s he hosted ‘100 Greatest Discoveries’ and ‘Greatest Inventions with Bill Nye’ for Discovery.

During this time he was also co-developing ‘MarsDial’ sundial that was developed to keep track of time spent on Mars explorations.

His show ‘The Eye of Nye’ was created in 2005; which was intended to teach a more mature audience about current issues such as modified food, energy, global warming and more.

He soon began to make appearances on TV shows such as: ‘America’s Most Smartest Model’, ‘The Climate Code’, ‘Larry King Live’, and ‘Who Wants to be a Millionaire’.

While doing this, he was also hosting ‘Stuff Happens’, and he was later chosen to be the representative of an exhibition at the Chabot Space Science Center in California.

In 2012, he was on CNN discussing the natural repercussions of the nuclear incidents in the country of Japan.

Here are some of the best highlights of Bill Nye’s career:

“Everyone you will ever meet knows something you don’t.” – Bill Nye

“To leave the world better than you found it, sometimes you have to pick up other people’s trash.” – Bill Nye

“There really is no such thing as race. We are all of the same stardust, we are all going to live and die on the same planet, a Pale Blue Dot in the vastness of space. We have to work together.” – Bill Nye

“The more you find out about the world, the more opportunities there are to laugh at it.” – Bill Nye

3 Rules for Success from Bill Nye

Now you know all about Bill Nye’s net worth, and how he achieved success; let’s take a look at the success lessons we can learn from him:

Sometimes it’s easy for us to label and define people from the beginning. But everyone has potential, and everyone has the ability to help us learn and understand something we didn’t know before.

We are all equal.

Labeling and differentiating people only puts you in the wrong mindset; it closes your mind to new things, ideas, and opinions. It’s a lot easier to live life when we all get treated like the equals that we are.

Set an example for others.

If you want to see change happen in the world, you have to start somewhere. And sometimes, you have to be the one to start it and set the example so that those around you can follow.

How much is Bill Nye worth?

Bill Nye’s net worth is estimated to be $8 Million.

How old is Bill Nye?

How tall is Bill Nye?

Bill Nye is one of the most iconic and well-known scientists of our time. As well as being an impressive mechanical engineer, his work on television teaching people of all ages about science has had an impact on many.

As of November 2022, Bill Nye’s net worth is approximately $8 Million.

What do you think about Bill Nye’s net worth? Leave a comment below.