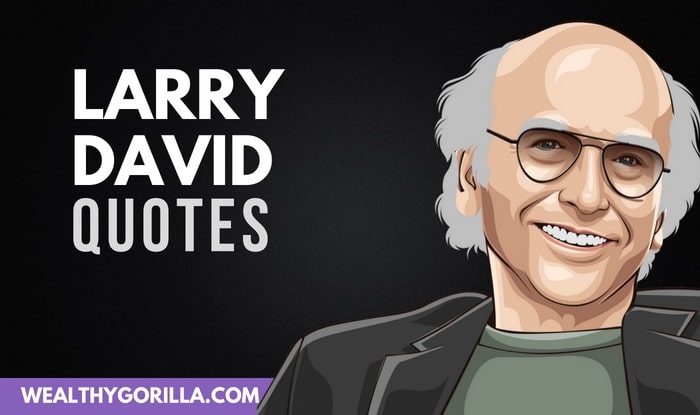 Which are your favorite Larry David Quotes?

Larry David is an American comedian and actor. David has managed to become one of the richest comedians in the world, after his collaborations with Jerry Seinfeld.

We’ve put together this collection of the best Larry David quotes:

1. “Actually I walk around with the Emmy wherever I go, but I’m very casual about it.” – Larry David

2. “At first, I didn’t realize it was gonna be a character. I just thought I was gonna be doing me.” – Larry David

3. “I couldn’t be happier that President Bush has stood up for having served in the National Guard, because I can finally put an end to all those who questioned my motives for enlisting in the Army Reserve at the height of the Vietnam War.” – Larry David

4. “I don’t take on big things. What I do, pretty much, is make the big things small and the small things big.” – Larry David

6. “I think we’re all good and bad, but good’s not funny. Bad is funny. Suppress the good and let the bad out, and then you can be funny.” – Larry David

8. “I’m not interested in closure. Some people just have heart attacks and die, right? There’s no closure.” – Larry David

9. “It began to dawn on me that perhaps my country needed me more at home than overseas.” – Larry David

10. “I’ve led this empty life for over forty years and now I can pass that heritage on and ensure that the misery will continue for at least one more generation.” – Larry David

12. “Sure, being a reservist wasn’t as glamorous, but I was the one who had to look at myself in the mirror.” – Larry David

13. “The temperature in that hangar would sometimes get down to 40 degrees, and very often I had to put on long underwear, which was so restrictive I suffered from an acute vascular disorder for days afterward.” – Larry David

14. “Well, I always think the worst things are going to happen here, because I’m – basically inside, I’m a bad person, and so the bad kind of takes over.” – Larry David

15. “You can’t do anything in life. The social barriers in life are so intense and horrific that every encounter is just fraught with so many problems and dread. Every social situation is a potential nightmare.” – Larry David

16. “All of a sudden I discovered that I’m allergic to caviar. It was the perfect metaphor for my life. When I was only able to afford bad caviar, I could certainly eat my fill of it.” – Larry David

17. “Every relationship is just so tenuous and precarious.” – Larry David

18. “I defy anyone to produce any evidence that the word ‘happy’ has ever crossed my lips. I am not now, nor have I ever been, ‘happy.'” – Larry David

19. “I don’t think anyone really is interested in reading about my emotional state. It’s not even interesting to me.” – Larry David

20. “I learned the first night that IHOP’s not the place to order fish.” – Larry David

21. “I tolerate lactose like I tolerate people.” – Larry David

24. “It has to do – I think – with growing up in an apartment, with my aunt and my cousins right next door to me, with the door open, with neighbors walking in and out, with people yelling at each other all the time.” – Larry David

25. “Most of the time I’m thinking, I’m glad that scene was improvised.” – Larry David

27. “Switzerland is a place where they don’t like to fight, so they get people to do their fighting for them while they ski and eat chocolate.” – Larry David

28. “There’s a sense of spontaneity, and no emphasis on jokes in this show. People generally talk the way they talk in life if you were in this particular situation.” – Larry David

29. “When I was living in New York, there was a lot of screaming in my life. I would just get into these altercations all the time. Being in public, dealing with shopkeepers, just trying to cross the street – things like that.” – Larry David

32. “Hear the birds? Sometimes I like to pretend that I’m deaf and I try to imagine what it’s like not to be able to hear them. It’s not that bad.” – Larry David

34. “I don’t write shows with dialogue where actors have to memorize dialogue. I write the scenes where we know everything that’s going to happen. There’s an outline of about seven or eight pages, and then we improvise it.” – Larry David

35. “I still think of that guy I was without a wife or kids, and I still want to entertain that guy. The lonely guy, the frustrated guy, the guy with no money – this is the guy who needs to laugh.” – Larry David

36. “I wanted to make a living, but I really was not interested in money at all. I was interested in being a great comedian.” – Larry David

37. “If you tell the truth about how you’re feeling, it becomes funny.” – Larry David

38. “I’m really only happy when I’m on stage. I just feed off the energy of the audience. That’s what I’m all about – people and laughter.” – Larry David

39. “It’s always good to take something that’s happened in your life and make something of it comedically.” – Larry David

40. “Most people are completely unaware of their breath. They violate your space, they have no idea that they have halitosis.” – Larry David

41. “Once I know people know who I am, it gives me a lot of licence and freedom to behave in ways I wouldn’t normally.” – Larry David

42. “The addition of nuts in salad… I always find to be beneficial.” – Larry David

43. “There’s also a certain rhythm to the way Jews talk that might be funny.” – Larry David

44. “When I’m in social situations I always hold onto my glass. It makes me feel comfortable and secure, and I don’t have to shake hands” – Larry David

45. “You know who wears sunglasses inside? Blind people and assholes.” – Larry David

46. “And eventually as I kept writing it, something emerged that was not quite me but a version of me.” – Larry David

47. “Hey, I may loathe myself, but it has nothing to do with the fact that I’m Jewish.” – Larry David

50. “I tell people that I’ve now done one decent thing in my life. Albeit inadvertently.” – Larry David

51. “I was planning on my future as a homeless person. I had a really good spot picked out.” – Larry David

53. “I’m surprised sometimes at how some of my actions are misinterpreted.” – Larry David

54. “It’s not every day that you get to be affectionate around something, it just doesn’t happen that often.” – Larry David

55. “My defensiveness in life really helps me as a driver.” – Larry David

Related:  27 of the Most Inspiring Taylor Swift Quotes

57. “The best situation is being a single parent. The best part about is that you get time off, too, because the kids are with their mom, so it’s the best of both worlds. There’s a lot to be said for it.” – Larry David

58. “Trying on pants is one of the most humiliating things a man can suffer that doesn’t involve a woman.” – Larry David

59. “When you’re not concerned with succeeding, you can work with complete freedom.” – Larry David

60. “Anyone can be confident with a full head of hair. But a confident bald man – there’s your diamond in the rough.” – Larry David

62. “I don’t really know much about TV and what people want to see. I’m not that well-informed about it.” – Larry David

63. “I had a wonderful childhood, which is tough because it’s hard to adjust to a miserable adulthood.” – Larry David

65. “I was very fortunate to hook up with Jerry in the first place. The network was already committed to doing something with him, so I skipped a couple of hundred steps right there.” – Larry David

67. “In those days, reserve duty lasted for six years, which, I might add, was three times as long as service in the regular army, although to be perfectly honest, I was unable to fulfill my entire obligation because I was taking acting classes and they said I could skip my last year.” – Larry David

68. “I’ve been in therapy. I know enough about myself now to know that I really don’t need to know anymore.” – Larry David

69. “No, I am a crier and if people ever saw me privately they would be shocked at what a bowl of mush I am underneath it all.” – Larry David

70. “Sometimes I have these fantasies of just moving to a foreign country and coming back with a full head of hair. Or not even come back! Make a new life there with hair… Change my name, just see what happens.” – Larry David

71. “The lunch in a normal American restaurant is very problematic for me. I don’t like to have hot food for lunch.” – Larry David

72. “Until I started doing standup, there were some very bleak days.” – Larry David

Thanks for viewing this collection of the best Larry David quotes! Don’t forget to share them on social media with your friends and family.

Which are your favorite Larry David quotes? Leave a comment below.