Deborah Meaden is a British businesswoman. Meaden is known...

Which are your favorite Jay Ryan quotes? Jay Ryan is...

These Kevin Hart quotes bring laughter into the world;

Hart is an American comedian, actor, writer and producer. He’s starred in many hilarious films such as Get Hard, Ride Along, Central Intelligence, and so on.

We’ve put together this collection of Kevin Hart quotes, which are both funny and inspirational. Lighten up people!

Here’s 35 of the best quotes from Kevin Hart:

1. “I just got punked by a homeless man, he asked me for some $ so I gave him $5..this bitch had the nerve to say “WTF am I suppose to do with this” I then said “Get somethin’ to eat” he then said “I don’t want to eat no f**king fast food sh*t, that sh*t will have me sh**ting on the streets.” – Kevin Hart

2. “A lot of blood, sweat, and tears have gone into this career of mine.” – Kevin Hart

3. “So I’m at the office, I tell this guy…Pass me the stapler, but when you pass it, make sure staples are in it, because if it isn’t, I can’t staple anythin’.” – Kevin Hart

4. “I don’t think you get successful to brag and throw what you have in the world’s face. That’s all private.” – Kevin Hart

“I think if you get kicked in the face you deserved it because that means that you watched the foot come to your face.” – Kevin Hart

6. “Ever argue with a female and, in the middle of the argument, you no longer feel safe because of her actions? She may start pacing back and forth real fast, breathing out her nose. You know what my girl do? When she get mad, she start talking in the third person. That’s scary as hell because that’s her way of telling me that from this point on, she is not responsible for none of her actions.” – Kevin Hart

7. “No matter what, people grow. If you chose not to grow, you’re staying in a small box with a small mindset. People who win go outside of that box. It’s very simple when you look at it.” – Kevin Hart

9. “Everybody wants to be famous, but nobody wants to do the work. I live by that. You grind hard so you can play hard. At the end of the day, you put all the work in, and eventually it’ll pay off. It could be in a year, it could be in 30 years. Eventually, your hard work will pay off.” – Kevin Hart

10. “My experiences in life are getting bigger and better. The more stuff I do, the more stuff I talk about – having kids, traveling, going through relationship problems, dealing with things in my own family. All that stuff builds character.” – Kevin Hart 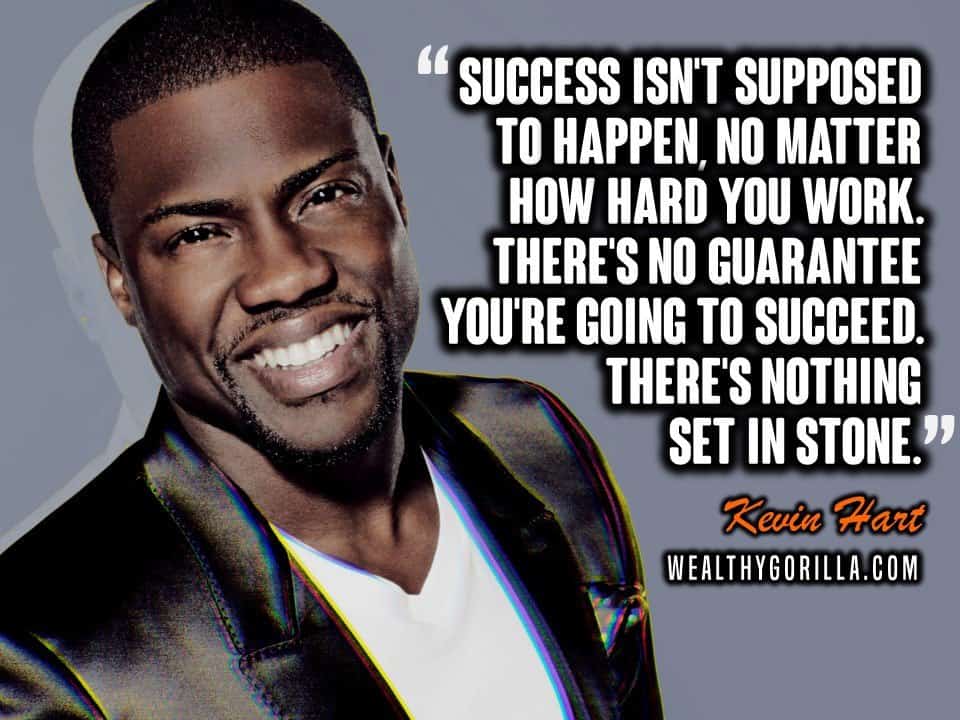 11. “Success isn’t supposed to happen, no matter how hard you work. There’s no guarantee you’re going to succeed. There’s nothing set in stone.” – Kevin Hart

12. “A reputation as a hard worker is a good reputation to have.” – Kevin Hart

13. “You definitely want your kids to understand their heritage, but I don’t want my kids to just focus on being black. They are people. I don’t want them to judge other people or to be judged. I want them to be good people, so good people will treat them accordingly. I preach that to my kids and everything else falls into place.” – Kevin Hart

14. “The day you stop doing the small things is the day you think you’re above everybody else.” – Kevin Hart

15. “Laughter heals all wounds, and that’s one thing that everybody shares. No matter what you’re going through, it makes you forget about your problems. I think the world should keep laughing.” – Kevin Hart

16. “My main goal is to be a self-made man and have control over what’s mine.” – Kevin Hart

17. “I am who I am. That’s why my friends and peers respect and appreciate me. I don’t change or cater my actions to fit my surroundings. I’m myself 24/7. People appreciate that.” – Kevin Hart

18. “This younger generation that’s around, that’s tweeting, Facebook-ing and Vine-ing, the fans appreciate that because they feel like they can get to you.” – Kevin Hart

“Some people love so hard that they can’t control those emotions when they’re at their deepest point.” – Kevin Hart

20. “I can get where some scientists would say comedians are crazy. What you have to understand: A lot of comedians are dealing with a dark passion. A lot of these are guys coming from a tumultuous life, including myself. Some people need outlets, a way to express yourself.” – Kevin Hart

23. “Everything is an open book. I don’t speak on other people’s hardship, but if it happened in my life or something that has been an experience on my particular journey, I’m going to talk about it. That’s what my fan base appreciates the most. I’m universal. You can relate to the things I say or that I go through.” – Kevin Hart

24. “No man wants to settle down. It happens. Eventually you’re going to bump into somebody that makes you go, ‘Hmm, I don’t mind seeing this person every day.'” – Kevin Hart

“I’m not going to stop having problems.” – Kevin Hart

26. “I feel like I have a job to do, like I constantly have to reinvent myself. The more I up the ante for myself, the better it is in the long run. I try to interact with my fans as much as possible. It’s good that the person I’m being onstage isn’t really an act. It’s really me.” – Kevin Hart

28. “At the end of the day, your fans are the people who support you in and out. And their opinions matter.” – Kevin Hart

29. “I don’t see how people are comfortable with seeing other people be great. You can be happy for anybody, but what is your excuse to not want to be great? These people are great because they just say, ‘I’ma do that,’ and they do it. That’s it. There’s no scientifical process.” – Kevin Hart 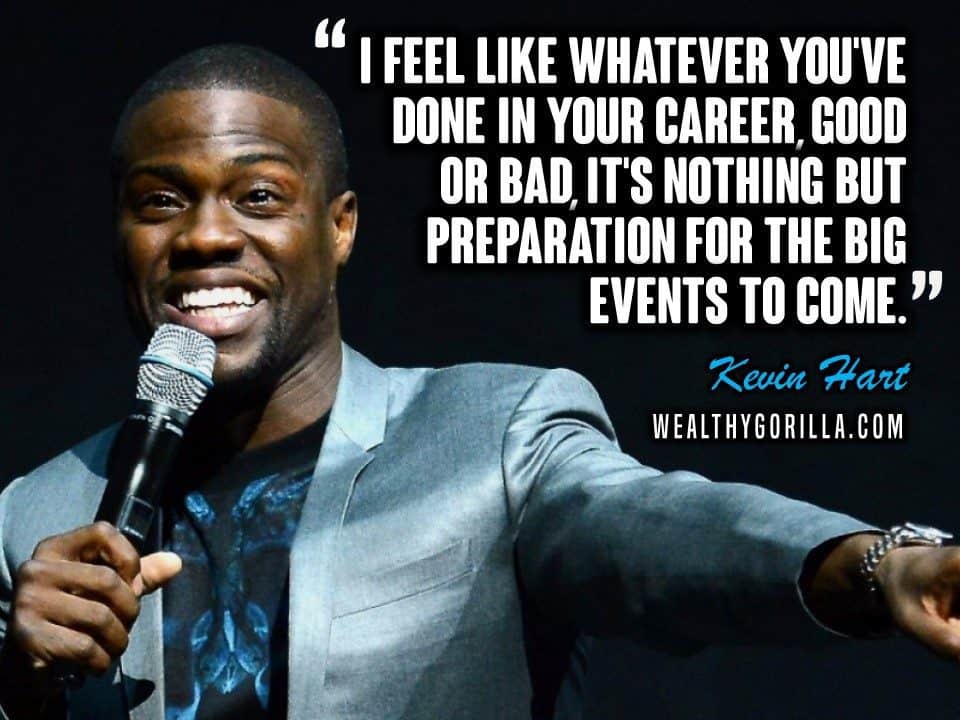 30. “I feel like whatever you’ve done in your career, good or bad, it’s nothing but preparation for the big events to come.” – Kevin Hart

32. “You can do the same thing with $20 million that you would do with $50 million. So at a certain point in your life and in your career, you realise that it’s not about the money.” – Kevin Hart

33. “I stayed true to my dreams and, eventually, they came true.” – Kevin Hart

34. “Everybody that’s successful lays a blueprint out.” – Kevin Hart

Thanks for checking out this collection of Kevin Hart quotes!

Which are your favorite Kevin Hart quotes? Leave a comment below.