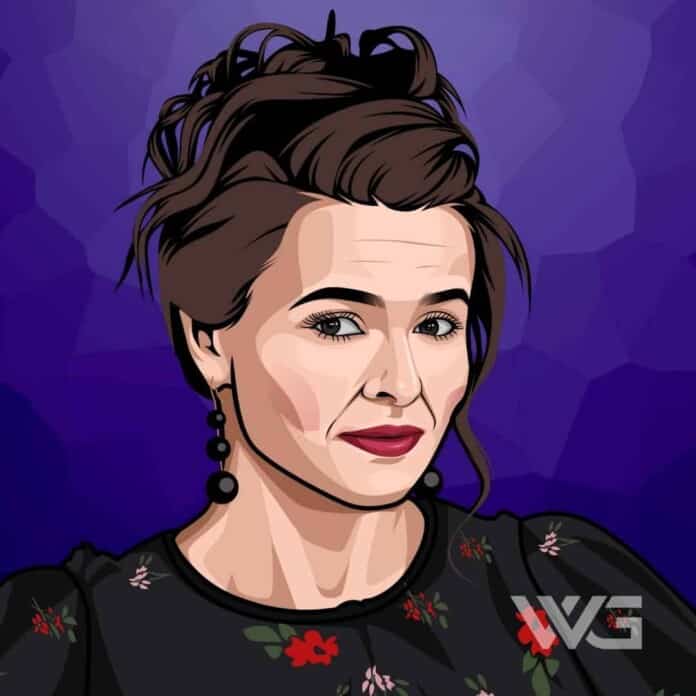 What is Helena Bonham Carter’s net worth?

Helena Bonham Carter is an English actress from London. She is best known for her roles in both low-budget independent art films and large-scale blockbusters.

She was nominated for the Academy Award for Best Actress for her role as Kate Croy in ‘The Wings of the Dove’. Carter is considered to be one of the greatest actresses of all time.

Helena Bonham Carter was born on the 26th of May, 1966, in London.  Carter is the daughter to Elena, a psychotherapist, and Raymond Bonham Carter, a merchant banker.

She came from a renowned political family. Her paternal grandparents were successful politicians. She was the great-granddaughter of former British PM Asquith.

Bonham Carter won a national writing contest in 1979. She used the prize money to pay for her entry into the actors’ Spotlight directory. She debuted at 16 in a television commercial.

Between 1986 and 1988, she concentrated on television work. She appeared in episodes of Miami ‪Vice and Absolutely Fabulous, and starred in television films such as A Hazard of Hearts and The Vision.

She did many movies with Tim Burton as director between 2001 and 2010, including ‘Planet of the Apes’, ‘Big Fish’ ‘Charlie and the Chocolate Factory’ and ‘Alice in Wonderland’ and ‘Corpse Bride’.

Between 2007 and 2011, she played the villainous, Bellatrix Lestrange, the female Death Eater, in the final four ‘Harry Potter’ films replacing the original choice Helen McCrory who bowed out after she got pregnant.

Carter starred alongside the likes of Daniel Radcliffe, Rupert Grint, Emma Watson, Robert Pattinson and Gary Oldman during the last four films of the series.

In 2012, she worked in two adapted classics. In the film, ‘Great expectations’ she played the role of the wealthy spinster, Miss Havisham, while in ‘Les Misérables’ she played the Thénardiers.

Here are some of the best highlights of Helena Bonham Carter’s career:

“Sometimes I get it right and I sometimes I get it wrong. But fashion is all about having fun. I think fashion has been hijacked by the fashion industry creating rules on what one should wear and I feel like breaking the mold and seeing that the world won’t crumble.” – Helena Bonham Carter

“Wear what you feel comfortable with. People say nasty things about what I wear in the street. I’m always in worst dressed lists, but you just have to dress for yourself and ­nobody else.” – Helena Bonham Carter

“I enjoy those small chats you have when people come up and talk to you about your work. It only involves a few seconds of effort to be nice to those people, and I am very grateful for the kind words that people have taken the trouble to express to me in person.” – Helena Bonham Carter

“But it’s often been the case, I’ve done so many countless small, independent films that really 3.2 people have seen, so you never know. You do it for the joy of the part and not necessarily expect anyone to see the final product.” – Helena Bonham Carter

Now that you know all about Helena Bonham Carter’s net worth, and how she achieved success; let’s take a look at some of the lessons we can learn from her:

The art of leadership is saying no, not yes. It is very easy to say yes.

2. A Part Of Happiness

Part of the happiness of life consists not in fighting battles, but in avoiding them. A masterly retreat is in itself a victory.

Keep your fears to yourself, but share your courage with others.

How much is Helena Bonham Carter worth?

Helena Bonham Carter’s net worth is estimated to be $60 Million.

How old is Helena Bonham Carter?

How tall is Helena Bonham Carter?

Born into an important political family, British actress Helena Bonham Carter endured a difficult childhood, having to cope with her parents’ ill-health.

Apart from these Burton films, she played the mad witch Bellatrix in several ‘Harry Potter’ films, the innkeeper Madame Thénardier in the big-budget musical ‘Les Misérables’ and Miss Havisham in ‘Great Expectations’.

As an actress, she has proved her ability to portray thoroughly modern characters and has always added value to any project in which she appeared.

What do you think about Helena Bonham Carter’s net worth? Leave a comment below.