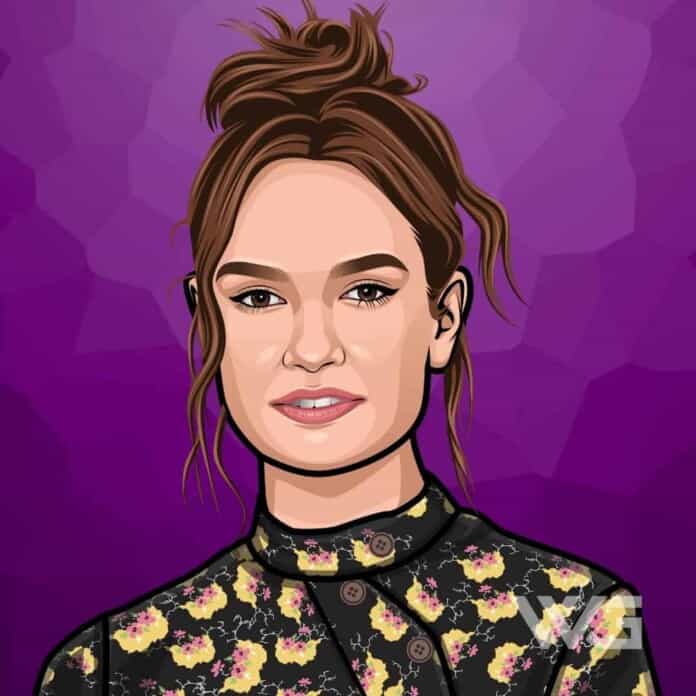 What is Lily James’ net worth?

Lily James is an English actress. James studied acting at the Guildhall School of Music and Drama in London.

She began her acting career in the television series ‘Just William.’ Her role in the series ‘Downton Abbey’ became her breakthrough role, and she had the leading role in ‘Cinderella.’

She has starred in several films including ‘Baby Driver,’ ‘Darkest Hour,’ ‘The Guernsey Literary’ and ‘Potato Peel Pie Society.’

Lily Chloe Ninette James was born on the 5th of April, 1989, in Surrey. James is the daughter of Ninette Mantle and James “Jamie” Thomson. She has two brothers, one older and one younger. Her grandmother was an American actress.

James attended Tring Park School for the Performing Arts, and she went on to study acting at the Guildhall School of Music and Drama in London. After that, she signed with Tavistock Wood management in London.

James television credits include ‘Just William,’ ‘Secret Diary of a Call Girl’ and ‘Downton Abbey.’ In 2011, she played Taylor at the Young Vic Theatre.

In 2015, James played Cinderella in the live-action Disney film ‘Cinderella.’ She was photographed by Annie Leibovitz as Cinderella. She also made her singing debut in the film singing ‘Sing Sweet Nightingale,’ ‘Lavender’s Blue’ and ‘A Dream Is a Wish Your Heart Makes.

The following year, she returned to television in the drama series ‘War & Peace. She also starred in her second major film as Elizabeth Bennet in the film ‘Pride and Prejudice and Zombies.’

In 2017, James appeared in several major films. She played Debora in the action film ‘Baby Driver.’ She played Elizabeth Layton, a secretary to PM Winston Churchill, in the war drama film ‘Darkest Hour.’

James starred as Eve in ‘All About Eve’ alongside Gillian Anderson in 2019. The play opened on 15 February to positive reviews, running at the  Noël Coward Theatre in the West End until 11 May.

How Does Lily James Spend Her Money?

James has to spend some of her money on charity work. She supports charities such as Motor Neurone Disease (MND) Association.

Here are some of the best highlights of Lily James’ career:

“Playing a Disney princess is the most amazing, unbelievable thing, and on the other, it’s completely terrifying. I would say it’s a cocktail of every sort of emotion. Princesses are great role models, they teach you about grief loss and have big hearts.” – Lily James

“I can only show what I have received from the characters. That’s what’s scary because you’re never going to be everyone’s taste, and you don’t want to let people down. But, I can only do what I can do.” – Lily James

“I think I’m up for not trying to play a literary heroine. I think I’d rather do someone that has just been created in a script rather than in a book that everyone knows and loves. The difficulty with it and the reason these characters are so loved is that every woman and man that reads it understands it in a different way.” – Lily James

“When you’re filming in Russia in Catherine’s Palace, and you’re in the real place where the Tsar’s ball really happened, all those years ago, it does so much of the work for you. It’s so vivid. You escape into this different time through the costumes, the sets, and the atmosphere.” – Lily James

“It took me a while to warm to the ’20s costumes on ‘Downton.’ I love it when women accentuate their curves, and that era was all about hiding them. The shapes they wore then were in tune with female empowerment. Cutting off their hair and hiding their busts was a way of saying, ‘We’re equal to men!'” – Lily James

“I have an amazing stylist; she’s called Rebecca Corbin Murray… I go around to her living room, and it’s exploding with dresses, and we go through them all, and she’s so good at picking things she knows I’ll like, and we work together. She’s taught me absolutely everything; she’s brilliant.” – Lily James

Now that you know all about Lily James’ net worth and how she achieved success; let’s take a look at some of the lessons we can learn from her:

There’s nothing wrong with falling in love and sharing your life with someone.

You are what you’re portrayed as.

How much is Lily James worth?

Lily James’ net worth is estimated to be $8 Million.

How old is Lily James?

How tall is Lily James?

Lily James is an English actress who first appeared in the TV show ‘Just William.’ She then followed up with a notable role in ‘Downton Abbey’ and ‘Cinderella.’ After establishing herself in the entertainment world, she continued to have central roles in shows like ‘War & Peace,’ as well as a range of different Hollywood movies.

What do you think about Lily James’ net worth? Leave a comment below.