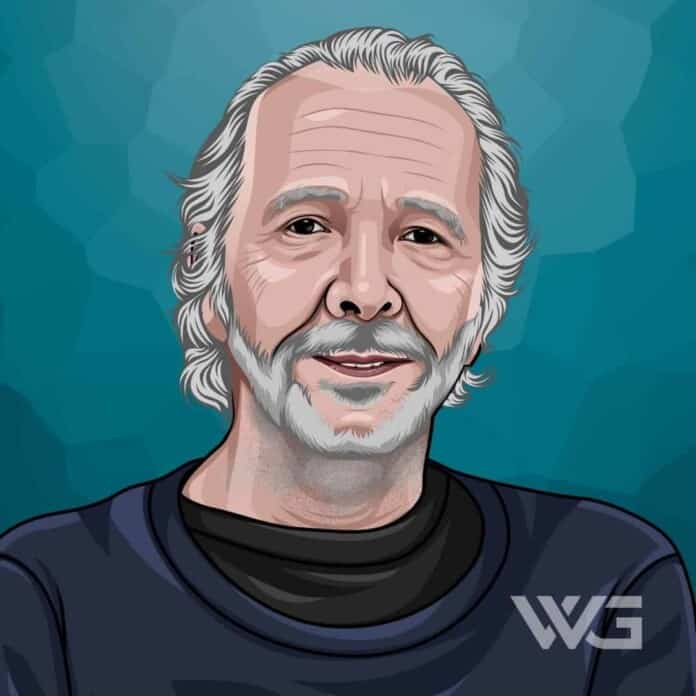 What is Herb Alpert’s net worth?

Herb Alpert is a musician, record producer, and music industry executive known for his work with the Herb Alpert and the Tijuana Brass band in the 1960s.

After outselling the Beatles in 1966, Alpert helped launch the career of many stars through his successful record label, A&M Records, selling the label to Polygram in the late 1980s.

Herb Alpert was born on March 31st 1925, in Los Angeles, California, and raised by parents Tillie and Louis Leib Alpert.

His musical parents introduced him to trumpet lessons at the age of eight, and by the time he was a teenager, Herb was performing at local dances.

After attending Fairfax High School, he joined the Army, where he played the trumpet at ceremonies.

Following his stint in the armed forces, Herb went to USC, became a member of the Trojan Marching Band, and began writing music for Keen Records.

By 1957, Herb Alpert was writing and recording music professionally, using a small recording studio in his garage and collaborating with Rob Weerts on numerous hit songs.

With his music career in full swing, he founded the band Herb Alpert and Tijuana Brass, developing his signature sound and gaining fame with the single The Lonely Bull and subsequent album of the same name,

Following collaborations with artists such as Lou Adler, he went on to work with some of the richest singers in the world, most notably with Janet Jackson on the song, Diamonds.

His music has been featured in many films, including Iron Man 3 starring Robert Downey Jr and the Brad Pitt and Matt Damon blockbuster Ocean’s 11.

Much of his vast net worth is due to his association with the record label A&M Records, which he co-founded with Jerry Moss and later sold to Polygram for $500 million in 1989.

As a record producer, he’s been involved in multiple number one hits, including 14 platinum sellers and 15 gold sellers.

With his successful solo career and work as a record producer, Herb Alpert has had a consistently successful career.

As the data shows, his biggest windfall came in the late 1980s with the same of A&M Records to Polygram.

Herb Alpert’s net worth has seen continual growth over the course of his career thanks to his successful albums and singles and his astute business acumen.

Here’s a breakdown of Herb Alpert’s annual net worth:

Herb Alpert was married to Sharon Mae Lubin from 1956-1971, with whom he has two children, Dore and Eden.

In 1973, Alpert married recording artist Lani Hall, and the couple has a daughter together called Aria Alpert Adjani.

He’s committed his finances to various charitable works over the years, and in the 1980s, he established The Herb Alpert Foundation and the Alpert Awards in the Arts along with the California Institute of the Arts.

With his hugely successful career both as a performer and music producer, Herb Alpert has been nominated for or awarded a series of accolades.

Here are some highlights from Herb Alpert’s career:

How Does Herb Alpert Spend His Money?

With his vast personal fortune, Herb Alpert is able to reside in one of the most expensive houses you can buy, living in a Spanish-style mansion in Pacific Palisades.

The house features hand-crafted doors and stenciled beams, with fresco paintings and historic arches adding to its unique style.

He also owns nine luxury cars, which are rumored to have a combined value of over $4 million.

A uniquely gifted musician as well as a hugely successful record producer, Herb Alpert’s career is characterized by a series of successful moment that confirm his immense talent.

Here are some of the best highlights of Herb Alpert’s career:

An inspiration to musicians and aspiring record producers around the world, Herb Alpert has many insights into the artform we can learn from.

Alpert understands both composition and music production at the highest level, from coming up with ideas for songs to how to arrange them in the best way possible.

Here are our favorite quotes from Herb Alpert:

Now that you know all about Herb Alpert’s net worth let’s take on board some of the amazing lessons we can learn from his life and experiences.

Here are some of the best success lessons to learn from Herb Alpert:

1. Create Music About The Things That Matter To You The Most

Music can be written about whatever topics you choose to focus on, but the songs that have the biggest impact are those about something truly personal.

Write the music and lyrics based on what matters to you the most so the depth of feeling is rich and meaningful.

2. Use Creative And Engaging Vocals To Draw The Listener In

The words you use for your songwriting are the hook that draws the listener into the world you’re trying to create.

3. If The Opportunity To Create Bigger Things Arises, Embrace It With Both Hands

When Polygram offered Alpert $500 million for his A&M Records label, he immediately took the opportunity.

In 1998, Herb and his partner Jerry Moss saw another chance to cash in, successfully suing PolyGram and winning an additional $200 million payout.

That concludes this guide to Herb Alpert’s net worth, covering his successful music career and work as a music industry executive.

His career has seen him pick up multiple awards from some of the most prestigious ceremonies, as well as launching many successful careers for other artists.

With his net worth likely to change as he continues his business investments, we’ll be updating this article in the future to make sure it includes the most up-to-date details.

What do you think about Herb Alpert’s net worth? Leave a comment below.