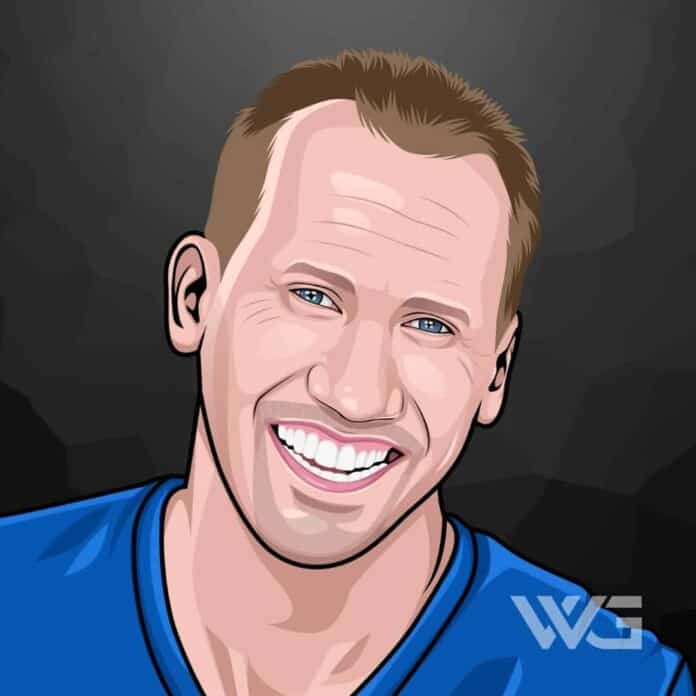 What is Jim Sonefeld’s net worth?

Jim Sonefeld is an American musician.

Sonefeld is one of the founding members of Hootie & the Blowfish. In 2008, Sonefeld released his solo album ‘Snowman Melting’ on Aquarian Nation Records/The Orchard record label.

Jim Sonefeld was born on the 20th of October, 1964, in Michigan. Sonefeld played collegiate soccer for the South Carolina Gamecocks.

Jim “Soni” Sonefeld grew up in Lansing. He has been married to Laura Beth Brunty since the 6th of December, 2008. He was previously married to Deborah Ann Mason.

Sonefeld dreamt of being a professional soccer player than a successful musician.

‘Cracked Rear View’ was released in 1994 and gained massive success. He and his bandmates found themselves traveling the world to support what would become the 16th best-selling album of all time in the United States.

The first track, ‘Hold My Hand,’ helped springboard Hootie & the Blowfish into its great success. In a few years, the band would record four more studio albums and received many awards.

During this era, Sonefeld’s addiction started to take over his life. He struggled to find peace and to hold his personal life together. Friends and family members tried interventions to no avail.

In 2004, he accepted that he was powerless over drugs and alcohol. His life had become entirely unmanageable. Sonefeld discovered there were parts of his life that had incurred damages beyond repair but that God would heal him if he turned his life over to His care.

Since then, he has had a full spiritual awakening. He followed a new path of clarity, and nothing was clearer to him than God’s calling. With his third solo release, ‘Love’ he celebrates an overflow of gratitude for the new life.

From the opening song ‘Not Waiting on Sunday,’ Sonefeld shared that God is a “gift that he can barely wait to open every morning”. This gift of mercy leads him to help others in recovery by sharing his story and his music with Celebrate Recovery groups around the southeast.

His first solo release, ‘Found’ and ‘In,’ was produced by Stan Lynch. Hoping to experiment with some new sounds for Love, Sonefeld sought out South Carolina producers Matt Houston/Sanchez Fair and Les Hall.

How Does Jim Sonefeld Spend His Money?

Here are some of the best highlights of Jim Sonefeld’s career:

“I definitely wanted to express more emotion on this record while stretching my musical horizons. For me it meant digging a little deeper vocally, which can be scary, and searching for some new sounds instrumentally. I’m always up for discovering some uncharted waters and I think I found some this time around.” – Jim Sonefeld

“I’d love to think I reached a bunch of fans on my own ‘solo’ merit, but it’s unlikely. Most of my listeners came through Hootie and the Blowfish to discover my solo music. Of course, I state that with no formal or informal study having taken place.” – Jim Sonefeld

“While it would be easy to blame my low ‘moral code’ on alcohol, drugs & fame, it also would be inaccurate.  Self-centered pride, lust, and fear were the root of my troubles. I just used the drugs and alcohol to numb the pain I felt from all my bad decisions.” – Jim Sonefeld

“Everybody who has felt the pull of the holy spirit and then made a conscious turn toward Christ has a story to share because we are all sinners. Some just appear more dramatic than others. I would not be where I am today without ‘every’ step it took to get here, good and bad.” – Jim Sonefeld

Now that you know all about Jim Sonefeld’s net worth and how he achieved success; let’s take a look at some of the lessons we can learn from him:

Cameras may follow you. Fans may cheer till it’s deafening. You may have people serving your every need around every corner, BUT, YOU have a choice in who YOU are, and who you want to be.

It’s all about LOVE! Finding it, living it, and giving it away. Sonefeld has been drawn very strongly over the past year or so to seek that deep, truthful meaning of ‘unconditional love.

Music is a powerful vessel indeed. When Sonefeld realized singing about his journey in faith could be such a strong, meaningful spiritual expression he was very excited!

How much is Jim Sonefeld worth?

Jim Sonefeld’s net worth is estimated to be $5 Million.

How old is Jim Sonefeld?

How tall is Jim Sonefeld?

Sonefeld’s album reached the spot in the US, Canada, and New Zealand. The band’s album ‘Fairweather Johnson’ was dropped in 1996. He released the solo album ‘Snowman Melting’ in 2012′.

What do you think about Jim Sonefeld’s net worth? Leave a comment below.