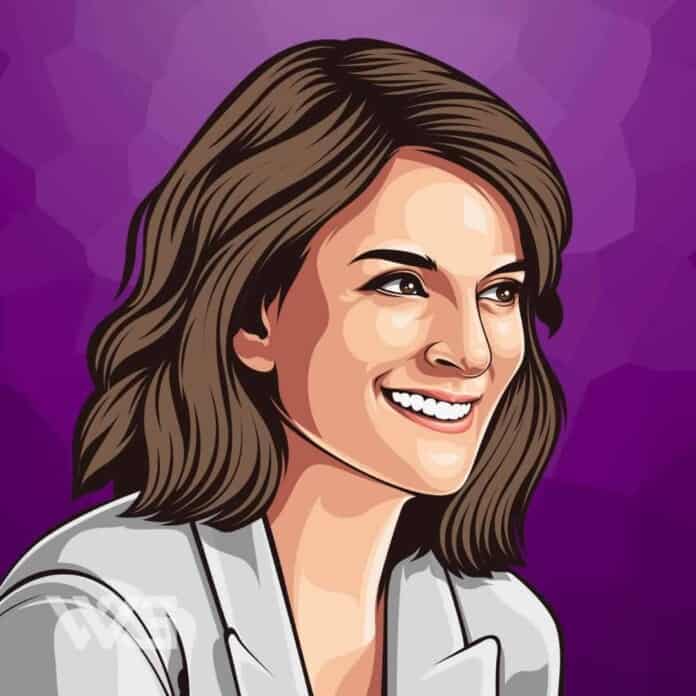 What is Tina Fey’s net worth?

Tina Fey is an American actress, comedian, writer, producer, and playwright from Pennsylvania.

She is best known for her work on the NBC sketch comedy series ‘Saturday Night Live’ and for creating the acclaimed comedy series ’30 Rock’ and ‘Unbreakable Kimmy Schmidt’.

Elizabeth Stamatina Fey was born on the 18th of May, 1970, in Pennsylvania. She is of mixed ancestry and has one brother. Her interest in comedy developed from a young age as her family often watched comedy shows on T.V, sometimes staying up late in the night.

She attended Beverly Hills Middle School before going to Upper Darby High School where she was an honor student and the co-editor of the school newspaper. She wrote a satirical column for the paper anonymously.

Tina’s writing and acting career began in 1997 when she got selected as a writer for NBC’s variety show ‘Saturday Night Live.’ In 1999 she became the show’s first female head writer.

She began performing sketches in 2000 and along with Jimmy Fallon became the co-anchor of Saturday Night Live’s Weekend Update. In 2004, Fallon was replaced by Amy Poehler, and it was the first time that two women co-anchored Weekend Update.

Fey wrote the screenplay for, and acted in the 2004 teen comedy film ‘Mean Girls.’ The film depicts the effects of high school social cliques can have on teenage girls.

She co-starred with her former colleague Amy Poehler in the comedy film ‘Baby Mama’, released in 2008. The same year, she lent her voice to ‘Ponyo’, a Japanese animated fantasy film.

Tina co-hosted The 70th Golden Globe Awards ceremony in 2013 with Amy Poehler. She also has many other projects scheduled for the year in the coming months.

Here are some of the best highlights of Tina Fey’s career:

“For my first show at ‘SNL’, I wrote a Bill Clinton sketch, and during our read-through, it wasn’t getting any laughs. This weight of embarrassment came over me, and I felt like I was sweating from my spine out. But I realized, ‘Okay, that happened, and I did not die.’ You’ve got to experience a failure to understand that you can survive it.” – Tina Fey

“Yeah, it’s tough being smart and sexy, too. I have to say, I’m really not that attractive. Until I met my husband, I could not get a date. I promise you it’s true. My husband Jeff Richmond saw a diamond in the rough and took me in.” – Tina Fey

“I work, and then whenever I have any other time, I’m with my daughter, and then I go to sleep. I think you basically have to abandon the dreams of having any other adult activities in your life. You have to go to sleep whenever your child goes to sleep. That’s basically how we’re doing it.” – Tina Fey

“I like to delude myself that I’m in the old-Hollywood mode. I just tailor my clothes well and try to keep my skin clear. While it would be great to work out an hour a day, there is something inherently sort of selfish about it. I can’t do it.” – Tina Fey

“Someone once said that to make a regular person laugh, you need to dress a guy up like an old lady and push him down the stairs. To make a comedy writer laugh, you have to push a real old lady down the stairs. I don’t know who that’s attributed to. I think it’s Aristophanes. Or Catherine the Great.” – Tina Fey

Now that you know all about Tina Fey’s net worth, and how she achieved success; let’s take a look at some of the lessons we can learn from her:

1. Juggling the Demands of Work-life Balance Can Be Crappy But It’s Worth It

“[Children] augment your life and your perspective. And they wear you out. There’s a Stephen Sondheim song, ‘Being Alive.’ It’s about how people you love just wear you out and irritate you and sit in your chair and make you lose sleep. But it’s what life is.”

2. Praise and Recognition Can Be Uncomfortable And Necessary

“This one makes me a little nervous. Have I really done enough to warrant this? Sometimes I tell myself, ‘Well, what would a guy do? He’d take it.’

They wanted to give me that Mark Twain Prize [for humor] in 2009, and I said, ‘I don’t think this is appropriate.’ And Lorne Michaels said to me, ‘Just take it while your parents are alive,’ which is very smart.”

3. Find a Mentor You Can Discuss the Major Life (And Career) Questions With

Fey not only has worked for SNL creator Lorne Michaels, but she also calls him to contemplate life.“[I ask him] big-picture things of how should I live my life, how to handle this person, jobs to take or not take, ways of managing people.”

How much is Tina Fey worth?

Tina Fey’s net worth is estimated to be $75 Million.

How old is Tina Fey?

How tall is Tina Fey?

Tina Fey is best known for her work in ‘Saturday Night Live’ and ‘30 Rock’. Even as a college student, Tina was interested in pursuing a career in comedy.

She got her major breakthrough when she was hired as a writer for ‘Saturday Night Live’. After just two seasons, she was promoted to the post of Head writer, the first female to become the head writer in the show’s history.

As of December 2022, Tina Fey’s net worth is approximately $75 Million.

What do you think about Tina Fey’s net worth? Leave a comment below.