Which are your favorite Kurt Cobain quotes?

Kurt Cobain was a famous American rock musician, well known for being the lead singer and songwriter of the band, Nirvana.

Cobain reportedly committed suicide at the age of 27, after struggling with depression and heroin addiction. Before his death, he was thought to be ‘the spokesman of a generation’.

1. “Wanting to be someone else is a waste of the person you are.” – Kurt Cobain

2. “Drugs are a waste of time. They destroy your memory and your self-respect and everything that goes along with your self-esteem. They’re no good at all.” – Kurt Cobain

3. “Throughout my life, I’ve always been really close with girls and made friends with girls. And I’ve always been a really sickly, feminine person anyhow, so I thought I was gay for a while because I didn’t find any of the girls in my high school attractive at all. ” – Kurt Cobain

4. “We have no right to express an opinion until we know all of the answers.” – Kurt Cobain

5. “I have to admit I’ve found myself doing the same things that a lot of other rock stars do or are forced to do. Which is not being able to respond to mail, not being able to keep up on current music, and I’m pretty much locked away a lot. The outside world is pretty foreign to me. ” – Kurt Cobain

6. “I was tired of pretending that I was someone else just to get along with people, just for the sake of having friendships.” – Kurt Cobain 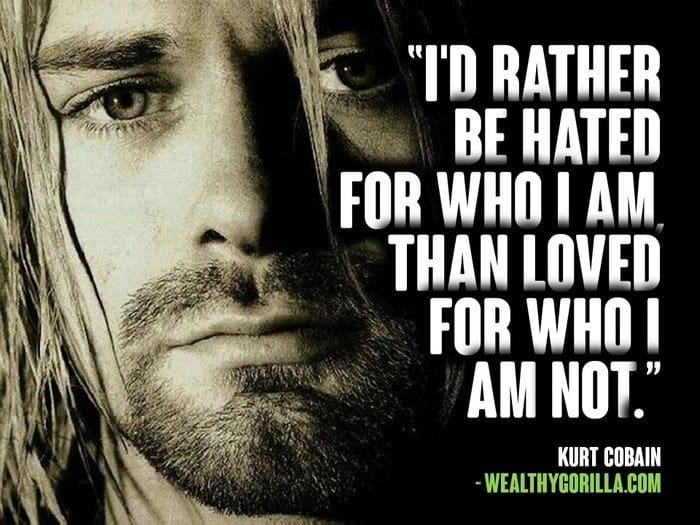 8. “If you die you’re completely happy and your soul somewhere lives on. I’m not afraid of dying. Total peace after death, becoming someone else is the best hope I’ve got.” – Kurt Cobain

9. “My mother encouraged me to be artistic. It was written in a contract at an early age that I would be an artist.” – Kurt Cobain

10. “I don’t blame the average seventeen-year-old punk-rock kid for calling me a sellout. I understand that. And maybe when they grow up a little bit, they’ll realize there’s more things to life than living out your rock & roll identity so righteously.” – Kurt Cobain

“I would like to get rid of the homophobes, sexists, and racists in our audience. I know they’re out there and it really bothers me.” – Kurt Cobain

14. “If you die you’re completely happy and your soul somewhere lives on. I’m not afraid of dying. Total peace after death, becoming someone else is the best hope I’ve got.” – Kurt Cobain

15. “I really miss being able to blend in with people.” – Kurt Cobain

17. “The duty of youth is to challenge corruption.” – Kurt Cobain

19. “I’ve never been a very prolific person, so when creativity flows, it flows. I find myself scribbling on little notepads and pieces of loose paper, which results in a very small portion of my writings to ever show up in true form.” – Kurt Cobain 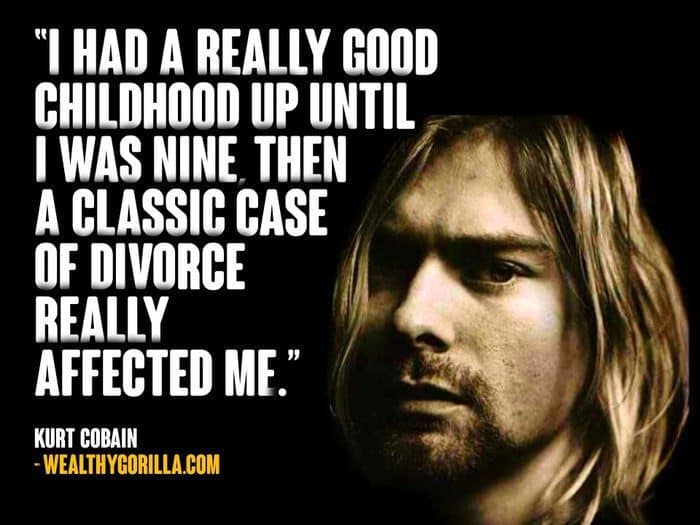 20. “I had a really good childhood up until I was nine, then a classic case of divorce really affected me.” – Kurt Cobain

21. “Just because you’re paranoid doesn’t mean they aren’t after you.” – Kurt Cobain

23. “I started being really proud of the fact that I was gay even though I wasn’t.” – Kurt Cobain

24. “I’m a spokesman for myself. It just so happens that there’s a bunch of people that are concerned with what I have to say. I find that frightening at times because I’m just as confused as most people. I don’t have the answers for anything.” – Kurt Cobain

26. “If you’re really a mean person you’re going to come back as a fly and eat poop.” – Kurt Cobain

27. “If my eyes could show my soul, everyone would cry when they saw me smile.” – Kurt Cobain

29. “There are a lot of things I wish I would have done, instead of just sitting around and complaining about having a boring life.” – Kurt Cobain

30. “I use bits and pieces of others personalities to form my own.” – Kurt Cobain

33. “I never wanted to sing. I just wanted to play rhythm guitar – hide in the back and just play.” – Kurt Cobain

35. “They laugh at me because I’m different; I laugh at them because they’re all the same.” – Kurt Cobain

38. “If my eyes could show my soul, everyone would cry when they saw me smile.” – Kurt Cobain

Thanks for viewing this collection of the best Kurt Cobain quotes! Don’t forget to share them on social media.

Which are your favorite Kurt Cobain quotes? Leave a comment below.