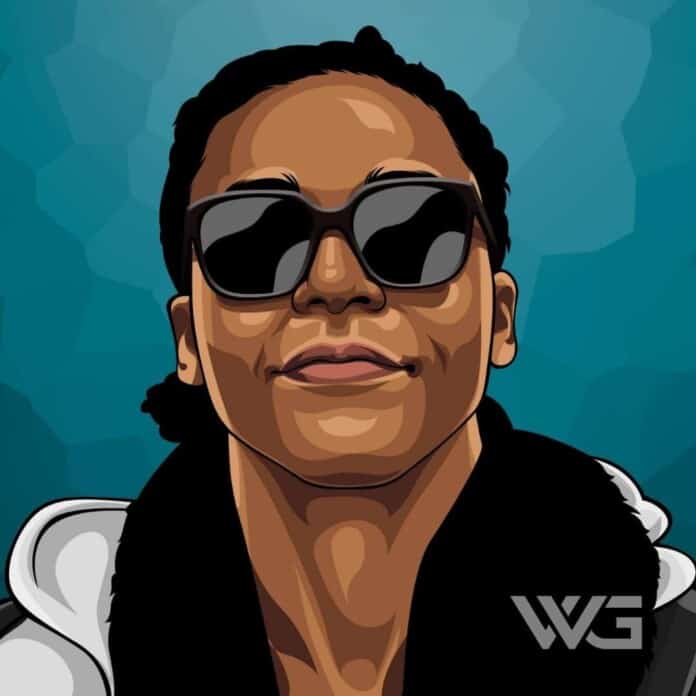 What is Lupe Fiasco’s net worth?

As of December 2022, Lupe Fiasco’s net worth is approximately $6 Million.

Wasalu Muhammad Jaco was born on the 16th of February, 1982, in Chicago, Illinois. Jaco is of West African descent and he is one of nine children of Shirley and Gregory.  Fiasco was raised Muslim on the West Side of Chicago on Madison Terrace housing project.

When Jaco was 5 years old his parents separated and he went on to live with his mother, Shirley.

He has described his father’s influence over the family by saying;

One of Fiasco’s most cerebral and enigmatic years was in the mid-2000s. His name has been well-known since his featured appearance on Kanye West‘s “Touch the Sky”” (2005), a hit single that set him up for success with a career that has entailed seven albums.

Although Lupe specializes in complex narratives and creative metaphorical verses, he hasn’t shied away from making singles with pop appeal, including the Top Tens ‘Superstar’ and ‘The Show Goes On.’

Lupe met a number of obstacles on the way to the release of his third album, ‘Lasers’. The process culminated in a petition signed by over 30,000 followers who demanded that Atlantic release the long-delayed album, which was followed by a fan protest outside the label’s New York City offices.

He received some backlash for “Around My Way (Freedom Ain’t Free),” due to its usage of Pete Rock & C.L. Smooth’s 1992 classic “They Reminisce Over You (T.R.O.Y.),” and for “Bitch Bad”. The album extended Lupe’s Billboard Rap Albums-topping streak and produced another major hit single, “Battle Scars.”

Here are some of the best highlights of Lupe Fiasco’s career:

“With ‘Hip-Hop Saved My Life,’ I attempted to make ‘Kick, Push,’ but for rappers. To give a real basic play-by-play of the life of a rapper before he makes it – if he ever makes it because you can get stuck in that and be trying to make it for the rest of your life.” – Lupe Fiasco

“When you start creating opinion, and you start creating a difference of opinion, you’re doing something. People are actually sitting down and critiquing. A lot of the stuff people hate, they really don’t. They only look at the outer shell. They don’t really get into it.” – Lupe Fiasco

“If they burn a book, have no worries. The book will feel NO pain so neither should you! True destruction of the Qur’an cannot be done with fire; it is destroyed when we fail to remember & practice its lessons in our daily lives. If this occurs, then it is ANOTHER fire that you should truly be concerned about!” – Lupe Fiasco

“When I started making my own music, I was more about recreating what I was hearing. I noticed that I had some control over what I was saying, and the effects that it’s going to have on people. I wanted to focus more on the positive side of things, which are more in tune with my morals and ethics.” – Lupe Fiasco

“Just be yourself and one day you will find someone who loves you for everything you are, flaws or no flaws.” – Lupe Fiasco

3 Amazing Lessons from Lupe Fiasco About Career and Life

Now that you know all about Lupe Fiasco’s net worth, and how he achieved success; let’s take a look at some of the strongest lessons we can learn from him about our career and life:

The journey to your goal could be a long one. So make sure you take the time to celebrate your progress along the way. Eat a nice dinner. High five your teammates. Strike a gong. Do a fist pump. Yell out from the rooftops. Because success is worth celebrating.

2. Figure Out Your Why

It’s such a great question that isn’t asked enough. Why does it all matter? Figure out your why and that’ll be the fuel for your motivation. Whether it’s supporting your family or making an impact on the world, figuring out your way is critical to take your work to the next level.

3. Understand Your Strengths and Amplify Those

You’ll be naturally talented in certain areas or you’ll practice a skill enough to become an expert at it. Focus your energy on amplifying those strengths rather than trying to be mediocre at everything. Better to be an expert at a few things than a mediocre jack of all trades!

How much is Lupe Fiasco worth?

Lupe Fiasco’s net worth is estimated to be $6 Million.

How old is Lupe Fiasco?

How tall is Lupe Fiasco?

Lupe Fiasco is one of the most well-known rappers in the industry that has worked with rappers such as Kanye West, Jay-Z and Rick Ross.

As of December 2022, Lupe Fiasco’s net worth is roughly $6 Million.

What do you think about Lupe Fiasco’s net worth? Leave a comment below.

What is Aaron Paul's net worth? Introduction  As of ,...