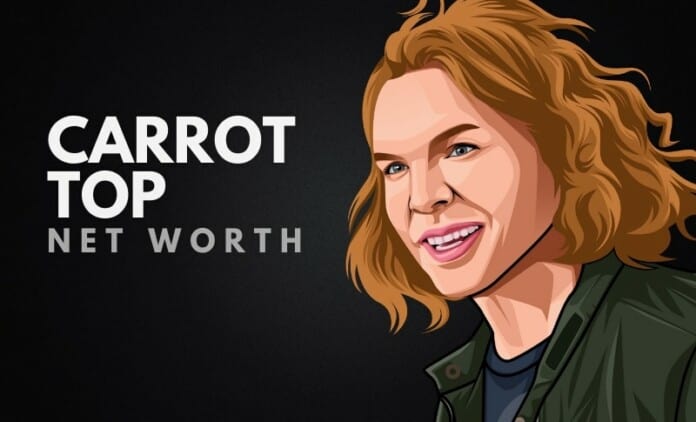 What is Carrot Top’s net worth?

Carrot Top is an American stand-up comedian and actor from Cocoa Beach Florida.

Over the years, he has appeared in a number of talk shows and comedy series including ‘Larry the Cable Guy’s Christmas Spectacular’, ‘Criss Angel Mindfreak’, ‘Scrubs’, ‘Politically Incorrect’ and ‘Reno 911!’

Scott Thompson was born on the 25th of February 1965, in Cocoa Beach, Florida. Thompson is the son of Larry Thompson. His father was a former rocket scientist who worked on a significant mission in NASA, including Gemini and Apollo.

Young Thompson attained his basic formal education from Cocoa High School, completing which; he enrolled at the Florida Atlantic University in Boca Raton.

To make a mark of his own and stand out from contemporaries and other stand-up comedians, he started employing props to enhance his act.

To induce humor, he even used his red curly hair as a prop. His other props include heels with training wheels, airline peanut bags with photos of missing luggage, and paper cups and string telephones.

The rising popularity and reputation earned him a guest spot on ‘The Tonight Show with Jay Leno’ in 1992. The show not only exposed him to a wider audience but also made his comedic talent gain a broader fan base.

Carrot Top featured in the satirical comedy, ‘Reno 911!’ in 2006. In it, he played not his usual self but an angry version of himself who jumbles his hotel room steals the police car, and later resists arrest.

The ‘Man Up’ episode in CSI: Crime Scene Investigation had him play the role of himself in 2011. Other than regular appearances at talk shows and comedy programs, he was also a regular feature at the Luxor Hotel.

Here are some of the best highlights of Carrot Top’s career:

“I think it’s the fact that I do something different and that I actually have some success with it. That bothers a lot of people… especially comics.” – Carrot Top

“I think the more you do this and the more comfortable you become on stage, you start speaking more and becoming more of a character in yourself.” – Carrot Top

“We must strive to move forward in life, by acknowledging the forces that are trusted upon ourselves by means of fear, and relinquish them by our ways of hope.” – Carrot Top

“On the weekends, I would go down and play these clubs in Key West or West Palm Beach or surrounding areas of Florida and then I’d go back to school for the week.” – Carrot Top

“Almost every day, someone asks if I ever flat iron my hair. I say, ‘No because I’m afraid it wouldn’t look good and wouldn’t come back curly.’” – Carrot Top

“I think it’s important for me, for my crew and for the audience to bring something new to each show. I have friends who have done the same act, word for word, for 20 years.” – Carrot Top

Now that you know all about Carrot Top’s net worth, and how he achieved success; let’s take a look at some of the lessons we can learn from him:

Be the change you want to see in the world. Simple.

If something is worth doing it’s worth doing with care and attention. You’ll get far greater satisfaction from doing tasks methodically, and with great attention to detail, than by rushing through them in a bid to get more done.

If you want to bring about change, present unequivocal facts and inspire through your actions.

How much is Carrot Top worth?

Carrot Top’s net worth is estimated to be $70 Million.

How old is Carrot Top?

How tall is Carrot Top?

Carrot Top has not only excelled in the art but has been an outrivaled stand-up comedian in the genre.

All his acts have the trademark style of using flamboyant props with such perfection that the audience takes only seconds to fall into splits of laughter.

From an early age, Top discovered his skills as a stand-up comedian. His first ever ac on stage was that in his freshman year.

As of February 2023, Carrot Top’s net worth is estimated to be roughly $70 Million.

What do you think about Carrot Top’s net worth? Leave a comment below.

Dillian Whyte is a professional boxer and two-time WBC interim heavyweight champion who has built a solid net worth with his fighting talents.