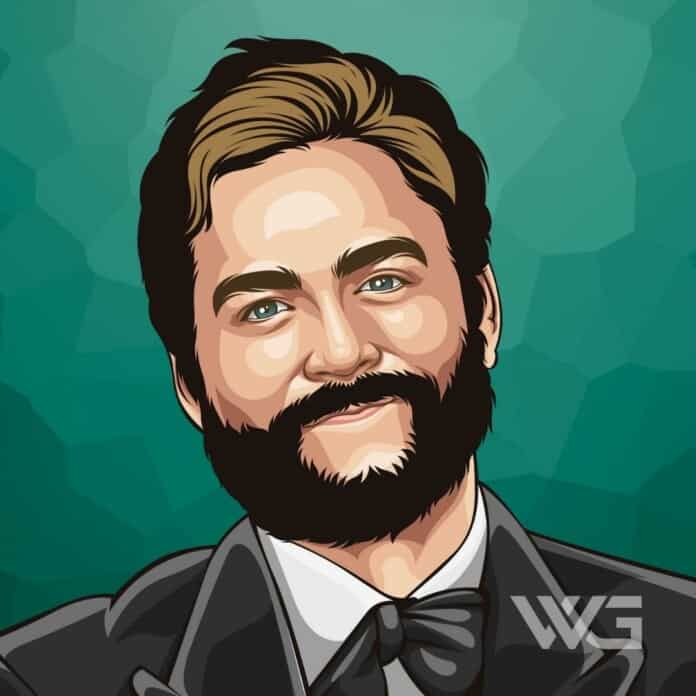 What is Zach Galifianakis’ net worth?

As of December 2022, Zach Galifianakis’ net worth is approximately $40 Million.

Zachary Knight Galifianakis is an American actor, writer, and comedian from Wilkesboro.

Galifianakis is best known for his Comedy Central Presents special in 2001, he also presented ‘Late World with Zach’.

He has also starred in movies such as ‘The Hangover Trilogy’, ‘Due Date’, ‘The Campaign’, ‘Masterminds’ and ‘The Lego Batman Movie’.

Zachary Knight Galifianakis was born in Wilkesboro, North California on the 1st of October, 1969.

His mother has Scottish ancestry, while his grandparents were emigrants from Crete, Greece. Galifianakis was baptized in his father’s Greek Orthodox church.

Galifianakis has a younger sister named Merritt, and an older brother named Greg. He attended Wilkes Central High school and subsequently attended but did not graduate from North Carolina State University. He began working at a public access station teaching waltz in 1991.

Zach Galifianakis made his acting debut as Bobby on the NBC sitcom ‘Boston Common’. He later would reprise the role a total of five times before the show was canceled.

In 1997, Galifianakis gained recognition when he went on to earn his debut film role in ‘The King and Me’.

In 2002, Galifianakis hosted his own cable talk show on VH1, ‘Late World With Zach’. However, from 2003 to 2005, he played his longest-running role on the drama ‘Tru Calling’. He later continued to tour small clubs across the U.S with stand-up acts.

A very popular documentary was made of the tour titled ‘The Comedians of Comedy’ which offered great exposure for Galifianakis. Eventually, the tour made Zach land a recurring role on the hit Comedy Central Show, ‘Reno 911’.

A few years later, he became known for a series of internet shorts for Absolut Vodka. The following year, he created his own internet comedy talk show ‘Between Two Ferns with Zach Galifianakis. The show was later hosted on Will Ferrell’s popular comedy site ‘Funny or Die’.

In 2009, Galifianakis landed his most famous role to date. Alongside Bradley Cooper, Ken Jeong, and Ed Helms he starred as one of the main characters in the hit comedy ‘The Hangover”.

The movie won a Golden Globe for best comedy or musical in 2010. The same year, he had a small part in the Oscar-nominated film ‘Up in the Air.

Here are some of the best highlights of Zach Galifianakis’ career:

“Four years ago on this very day, I tried to take my own life. And I said, “Zach, do it in front of your co-workers and end the misery.” I don’t know how many of you ever tried to jump off of a Pizza Hut, but you’ll just get a sprained ankle out of the deal. Then you’ll have to go back inside, and serve crazy bread.” – Zach Galifianakis

“I have never been much of a groomer.I’ve had women smell me and say that should be bottled. I would advise guys to lay off the Drakkar, because the cavemen weren’t wearing it. They might have been putting mint leaves on their balls, but your scent is grown naturally. I have really good dating advice.” – Zach Galifianakis

“I’m the most mellow person offstage. I think it’s just, going onstage lets me get out some frustration that I’m too shy to do in real life. Instead of doing it in private, I’d rather do it in front of 1,000 people who’ve paid $25 to see me lose my mind.” – Zach Galifianakis

“I watch a happy person doing stand-up, and I go, “What the hell is this? This person’s happy!” You need internal conflict. You need the guy to be out of step with society. It’s a tool for comedy.” – Zach Galifianakis

“People get TV deals by doing something in their grandmother’s basement. It is definitely the wave. Everybody is trying to do all that stuff. I mean, the Internet is the only reason that I’ve gotten work is because I’ve somehow created a line and people have seen it. And then I’ve been asked to auditions.” – Zach Galifianakis

View our larger collection of the best Zach Galifianakis quotes!

How much is Zach Galifianakis worth?

Zach Galifianakis’ net worth is estimated to be $40 Million.

How old is Zach Galifianakis?

Zach Galifianakis was born on October 1, 1969, and is currently 53 years old.

How tall is Zach Galifianakis?

Zach Galifianakis’ net worth has increased since he made his breakthrough in the comedy ‘The Hangover’ alongside Bradley Cooper and Ed Helms. Since then, he has become a household name in film and comedy.

As of December 2022, Zach Galifianakis’ net worth is estimated to be roughly $40 Million.

What do you think about Zach Galifianakis’ net worth? Leave a comment below.