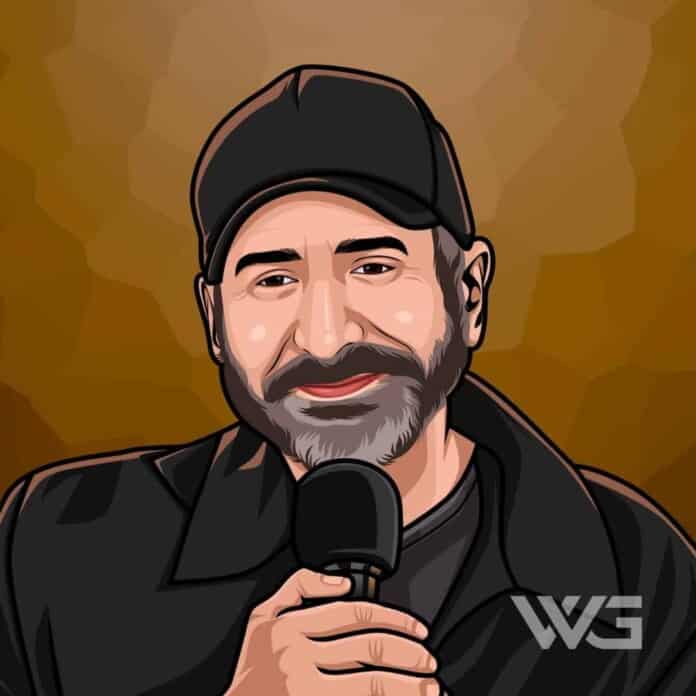 What is Dave Attell’s net worth?

Dave Attell is an American stand-up comedian, actor, and writer.

Attell is best known as the host of Comedy Central’s ‘Insomniac with Dave Attell.’ The show earned him a cult following. His work has drawn admiration from such fellow comics as Patton Oswalt and Bill Burr.

Attell was born to a Jewish family. He was raised in Rockville Centre, New York.

Attell graduated from South Sife High School. After he graduated from New York University with a degree in communications, Attell began performing at open-mic nights.

Attell had his first gig at Governor’s in Levittown. His first television appearance was in 1988 on VH1’s Stand-Up Spotlight, which featured Lewis Black, Margaret Cho, Jeff Garlin, Jay Mohr, and Wanda Sykes.

In 1993, Attell made his first appearance on ‘The Late Show with David Letterman.’ In 1995, he was featured on two HBO specials: alongside Louis C.K, Anthony Clark, Eric Tunney, and Dave Chappelle. He was a featured performer on the 1995 Young Comedians Special hosted by Garry Shandling.

Attell appeared in ‘Dr. Katz, Professional Therapist’ in 1995. In 1999, the network issued Attell an installment in their Comedy Central Presents series. The same year, the network signed him as a regular commentator to its satirical news series ‘The Daily Show with Jon Stewart‘.

Attell toured with Jeff Ross on the Bumping Mics Tour in 2018. Over the last three days of the tour, they taped a three-part documentary series for Netflix.

‘Insomniac with Dave Attell’ is a television series described as “Wild on E! for Ugly People”. It featured Atell walking the streets of America, meeting people in a haze of ecstatic inebriation.

Here are some of the best highlights of Dave Attell’s career:

“The more Discovery Channel you watch, the less chance you have of ever meeting a woman. Because it fills your head with odd facts that can come out at any moment. “Hello. Did you know Hitler was ticklish? That sea otters have four nipples? Wait – don’t run away!”” – Dave Attell

“There’s a late-night scene in every town, and everyone has something going on, … I’ve heard good stories about (Syracuse); this is a very good party town, a good drinking place. I definitely would like to come back and check it out further. Do some more research, as I call it.” – Dave Attell

“This one guy, the worse guy in the music. The Yanni man. You know Yanni? First of all, anyone who looks like a magician and doesn’t do magic, I don’t like. I don’t even like magic, I hate it. But I love the word, “Ta-da”! I don’t get to say it, right? I never do any magic.” – Dave Attell

“For a long time the people at my shows were sort of the Pantera-tattoo trucker guys, really cool dudes, but I don’t know what happened to them. That’s the crowd that I like, the ones that don’t get so offended just to be offended.” – Dave Attell

“I played the town a bunch. They used to have a club Downtown, but I don’t think it’s there anymore. But I was at the casino maybe a year ago. But I can’t say that I’ve been Downtown in the last two years.” – Dave Attell

Now that you know all about Dave Attell’s net worth and how he achieved success; let’s take a look at some of the lessons we can learn from him:

Doesn’t matter what you say or do; people can always find a way to call you a dick.

Attell means that men and women are a lot alike in certain situations. Like when they’re both on fire – they’re exactly alike.

3. Comedy Can Be Hard

Sometimes it’s hard to tell if a joke is working or not for the first couple of minutes.

How much is Dave Attell worth?

Dave Attell’s net worth is estimated to be $6 Million.

How old is Dave Attell?

How tall is Dave Attell?

Dave Attell is an American stand-up comedian, writer, and actor.

Attell is best known as the host of Comedy Central’s ‘Insomniac with Dave Attell’. He has written for ‘Saturday Night Live’, and ‘The Jon Stewart Show’.

His film and television appearances include ‘Arrested Development, ‘Funny People,’ ‘Trainwreck,’ ‘The Jim Gaffigan Show’ and ‘Crashing.’ He has lent his voice to many projects, including ‘Dr. Katz, Professional Therapist’, Bob’s Burgers’ and The Simpsons’.

What do you think about Dave Attell’s net worth? Leave a comment below.

What is Gucci Mane's net worth? Introduction As of ,...