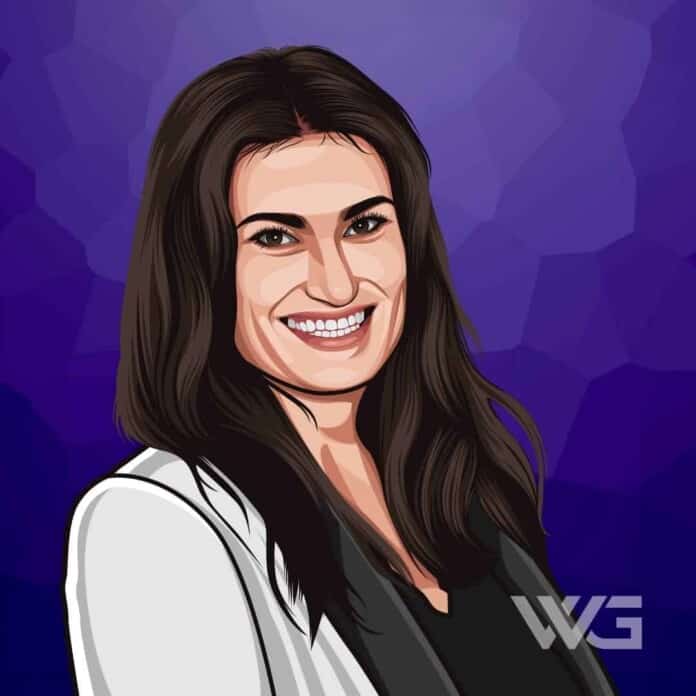 What is Idina Menzel’s net worth?

Idina Menzel is an American actress, singer, and songwriter.

Menzel rose to prominence when she originated the role of Maureen Johnson in the Broadway musical Rent. Her performance earned her a Tony Award nomination in 1996.

Menzel bagged a ‘Tony Award for Best Actress in a Musical’ for her poignant depiction of Elphaba in ‘Wicked,’ a musical co-composed by Winnie Holzman and Stephen Schwartz for Broadway.

As of December 2022, Idina Menzel’s net worth is estimated to be $16 Million.

Idina Kim Menzel was born on the 30th of May, 1971, in New York. She graduated from ‘Tisch School of the Arts’ affiliated with New York University, receiving a BFA degree with a major in Drama.

Following the split-up of her parents, Idina was 15 then began performing as a Bat Mitzvah and wedding songstress to make ends meet and fund her university education.

Menzel gave her debut public performance as a singer at the ‘Lilith Fair’ concert in 1998. She recurrently performs in New York City during her nationwide tours. Her first solo record, ‘Still, I Can’t Be Still,’ was released in 1998 by Hollywood Records.

In 2008, Menzel embarked on a musical tour to promote ‘I Stand,’ and the first four stops were complete sellouts. She sang the title track from the album during Macy’s Thanksgiving Day Parade in November 2008.

She launched her fourth album, ‘Holiday Wishes,’ in 2014. The album peaked at the 10th spot on the Billboard 200, making it her top-charting record.

During the 2014 ‘Billboard Women in Music’ award ceremony, Idina was bestowed with the ‘Breakthrough Artist Award.’
On 23rd September 2016, Menzel launched her eponymous fifth album ‘Idina.’

In 2014, her song “Let It Go” for the movie ‘Frozen’ won an Academy Award and a Grammy Award and was nominated for a Golden Globe Award.

As of December 2022, Idina Menzel’s net worth is estimated to be roughly $16 Million.

How Does Idina Menzel Spend Her Money?

Idina Menzel spends some of her money on real estate and charity work.

Menzel owns a beautiful home in Los Angeles. Built in 1959 and since updated, the 4,708-square-foot house is entered through hand-carved Peruvian doors.

Here are some of the best highlights of Idina Menzel’s career:

“You can’t get it all right all the time, but you can try your best. If you’ve done that, all that’s left is to accept your shortcomings and have the courage to try to overcome them.” – Idina Menzel

“Performing isn’t only about the acrobatics and the high notes: It’s staying in the moment, connecting with the audience in an authentic way, and making yourself real to them through the music. I am more than the notes I hit, and that’s how I try to approach my life. You can’t get it all right all the time, but you can try your best. If you’ve done that, all that’s left is to accept your shortcomings and have the courage to try to overcome them.” – Idina Menzel

“I don’t do too much looking back and regretting things – not that I haven’t made tons of mistakes. But I do think people are in our lives so we can learn lessons and evolve as better human beings.” – Idina Menzel

“I know I’m known for singing some of those high notes, but that’s really not what giving someone goosebumps is all about. It’s about really trying to find what makes you unique.” – Idina Menzel

“In my songs, there’s a lot of intimate, personality-driven, sweet singing, and that’s the kind I actually love the most, as close to how we speak as possible. I do get to make the crazy high notes, of course. But that’s also a part of me. I’m a full spectrum. A vulnerable side and a side that wants to kick ass.” – Idina Menzel

“That’s what I love about songwriting – that you can write something about your own experiences and think it’s completely specific to you, and then people can take away a completely different meaning for themselves. I really love that. I think you’ve been successful at writing a song when it has a larger life than yourself.” – Idina Menzel

Now that you know all about Idina Menzel’s net worth and how she achieved success; let’s take a look at some of the lessons we can learn from her:

Things happen for a reason and in their own time.

2. The People Who Stand Out

Everything’s always about being homogenized and following in a group. The people who stand out always have the most problems.

3. Be Your Own Role Model

Being a role model is about being true to yourself.

How much is Idina Menzel worth?

Idina Menzel’s net worth is estimated to be $16 Million.

How old is Idina Menzel?

How tall is Idina Menzel?

Idina Menzel is an illustrious American actress, theater personality, singer and songwriter, who came to the limelight by portraying the lesbian persona of Maureen Johnson in ‘Rent’ – a Broadway musical.

She has garnered encomiums from fans and critics for illustrating Shelby Corcoran in ‘Glee’ – a musical comedy-drama TV series.

As of December 2022, Idina Menzel’s net worth is estimated to be roughly $16 Million.

What do you think about Idina Menzel’s net worth? Leave a comment below.