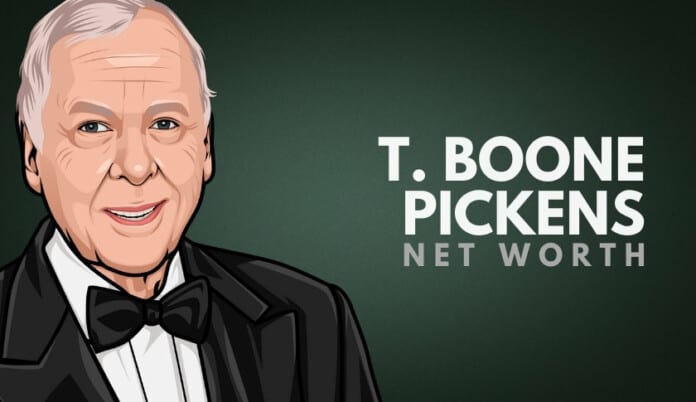 What is T. Boone Pickens’ net worth?

T. Boone Pickens was an American business magnate and financier.

Pickens chaired the hedge fund BP Capital Management. He was a well-known takeover operator and corporate raider during the 1980s. In 2016, Pickens had a net worth of $500 million.

Thomas Boone Pickens was born on the 22nd of May, 1929, in Oklahoma. Pickens is the son of Thomas Boone Sibley Pickens.

His father worked as an oil and mineral landman. He was the first child born via Caesarean section in history.

His great-great-grandfather was politician Ezekiel Pickens. When he was 12 years old, he delivered newspapers.

He later cited his boyhood job as an early introduction to “expanding quickly by acquisition.”

In 1981, Mesa had grown into one of the largest independent oil companies. Pickens led the companies first major acquisition, a takeover of the Hugoton Production Company, which was 30 times the size of Mesa.

Pickens chaired the Board of Regents of West Texas State University. He also organized a campaign in the mid-1980s against the Amarillo Globe-News newspaper.

Pickens received The Franklin Institute “Bower” Award in 2009 for Business Leadership for 50 years of visionary leadership in oil and other types of energy production.

How Did T. Boone Pickens Spend His Money?

Pickens gave more than $1 billion to various charities, half of which went to his alma mater Oklahoma State University. As of this writing, his donations to Oklahoma State top $625 million.

Here are some of the best highlights of T.Boone Pickens’ career:

“I don’t go cheap on anything, but I’m not a shopper. If I want something, I look at it, decide what it is, but it will usually be the best product. I’ve got a pair of loafers that I still wear that I got in 1957.” – T. Boone Pickens

“Be willing to make decisions. That’s the most important quality in a good leader. Don’t fall victim to what I call the ‘ready-aim-aim-aim-aim syndrome.’ You must be willing to fire.” – T. Boone Pickens

“Keep things informal. Talking is the natural way to do business. Writing is great for keeping records and putting down details, but talk generates ideas. Great things come from our luncheon meetings which consist of a sandwich, a cup of soup, and a good idea or two. No martinis.” – T. Boone Pickens

“I don’t like stock buybacks. I think if a company has the money to buy their stock back, then they should take that and increase the dividends. Send it back to the stockholder. Let them invest their money again from the dividends.” – T. Boone Pickens

“I know what people say, that water’s a lot like air. Do you charge for air? Well, of course not. Well, you shouldn’t charge for water. Okay, watch what happens you won’t have any water” – T. Boone Pickens

“I do believe that oil production globally has peaked at 85 million barrels. And I’ve been very vocal about it. And what happens? The demand continues to rise. The only way you can possibly kill demand is with price. So the price of oil, gasoline, has to go up to kill the demand. Otherwise, keep the price down, the demand rises.” – T. Boone Pickens

Now that you know all about T.Boone Pickens’ net worth and how he achieved success; let’s take a look at some of the lessons we can learn from him:

If you don’t have a refinery operating, it’s hard to use available oil.

How much is T. Boone Pickens worth?

T. Boone Pickens’ net worth is estimated to be $950 Million.

How old is T. Boone Pickens?

How tall is T. Boone Pickens?

T. Boone Pickens was an American business magnate who had a net worth of $950 Million at the time of his death.

Pickens has been known for making huge donations to different charities.

He gave away well over $1 billion while alive and was a member of The Giving Pledge.

What do you think about T. Boone Pickens’ net worth? Leave a comment below.