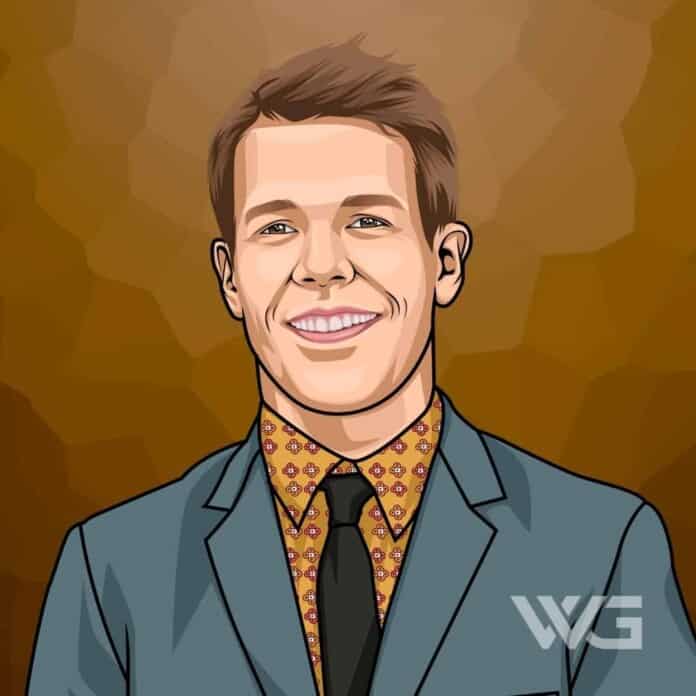 What is Jake Lacy’s net worth?

Jake Lacy is an American actor from Massachusetts. Lacy is best known for his portrayal of Pete Miller on the ninth and final season of ‘The Office’ and as a co-lead as Casey Marion Davenport on the ABC sitcom ‘Better with You’.

Jake Lacy was born on the 14th of February, 1986, in Greenfield, Massachusetts. Lacy grew up in Vermont. He attended ‘Otter Valley Union High School’ and then graduated from the ‘University of North Carolina School of the Arts’.

In high school, he was part of many professional stage productions, such as ‘A Midsummer Night’s Dream,’ in which he was cast as ‘Demetrius’ (‘Hartford Stage’ creation).

Lacy began his acting career in 2008, with an episode of the ‘CBS’ soap opera ‘Guiding Light,’ the longest-running series in American TV history. Two years later, he bagged his breakthrough role in the ‘ABC’ romantic sitcom ‘Better with You.’

He had a lead role in the Columbia thesis film ‘C’est Moi.’ Following this, in 2012, he began his recurring role as ‘Pete Miller,’ or “Plop,” in the ninth and the final season of the ‘NBC’ sitcom ‘The Office.’

The same year, he earned the leading role of ‘Caleb Fuller,’ an intramural football team leader, in the live-action/animated sports comedy ‘Balls Out.’

Lacy was cast as ‘Forde’ in the 2016 political thriller ‘Miss Sloane.’ He made an appearance in an episode of the late-night talk show ‘Last Week Tonight,’ titled ‘Encryption.’

In 2018, Jake played ‘Brett Wyden’ in the science-fiction monster flick ‘Rampage.’ Following this, he was seen as ‘Brian’ in the drama ‘Diane,’ which premiered at the ‘Tribeca Film Festival.’

Here are some of the best highlights of Jake Lacy’s career:

“I look like an accountant. And no offense to accountants! There are some really cool accountants out there.” – Jake Lacy

“I watched ‘Ghostbusters’ at the age of four. It’s my favorite movie, still. Bill Murray‘s, like, the weirdest straight man that you’ve ever seen. He’s convinced that he’s the normal one, even though he’s definitely not.” – Jake Lacy

“Maybe we see that characteristic in Fran materialize in other ways. There is an assumption that everyone feels the way he feels about the world, and so when someone is not behaving in accordance with that, they must know that they are out of line and that he has a right to hold them accountable for that.” – Jake Lacy

“There’s a certain power or self-produced status that comes from being a quote good guy and playing by the rules and doing the right thing that gives you the assumed moral high ground to then be kind of a prick.” – Jake Lacy

Now that you know all about Jake Lacy’s net worth, and how he achieved success; let’s take a look at some of the lessons we can learn from him:

Choose to tell people what you want and how you want it. If not then don’t complain about what they give you or how they treat you.

2. We All Need Someone Who Can Be There For Us

When you are on top you need someone who will honestly celebrate your success with you.

The greatest enemy of your next level, are the ones you discussed it with.

How much is Jake Lacy worth?

Jake Lacy’s net worth is estimated to be $500 Thousand.

How old is Jake Lacy?

How tall is Jake Lacy?

Jake Lacy is an American actor who rose to prominence with his portrayal of ‘Pete Miller’ in ‘The Office.’ Hailing from Vermont, he is a trained actor and was highly active in stage plays in school.

As of December 2022, Jake Lacy’s net worth is estimated to be roughly $500 Thousand.

What do you think about Jake Lacy’s net worth? Leave a comment below.