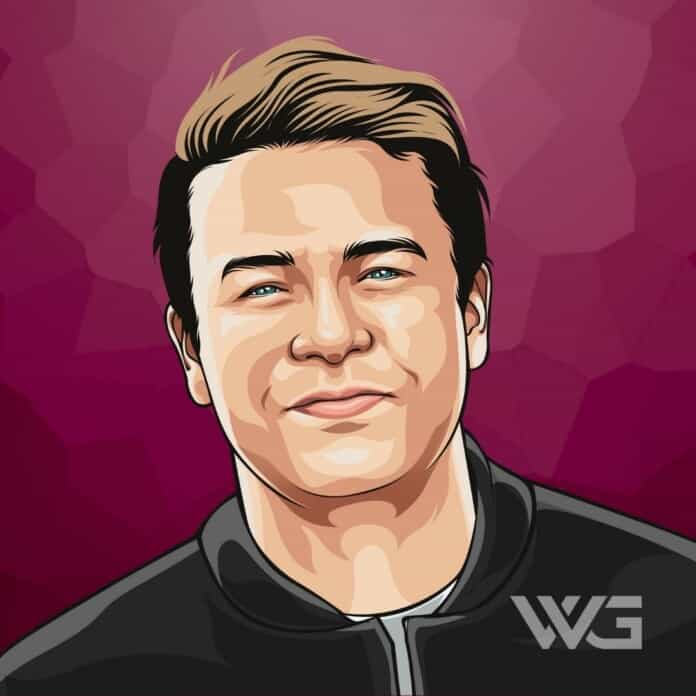 What is Jamie Oliver’s net worth?

James “Jamie” Oliver is an English chef and restaurateur from Clavering, England.

Oliver is best known for his approachable cuisine, which has led him to front numerous television shows and open many restaurants.

He was educated in London before joining Antonio Carluccio’s Neal Street restaurant as a pastry chef and he is considered to be one of the greatest chefs in the world.

Jamie Trevor Oliver was born on the 27th of May, 1975, in Clavering, England- Oliver is the son to Trevor and Sally. Oliver began to work at his parent’s pub ‘The Cricketers’ when he was 8 years old. By the time he was 11, he could outdo the kitchen staff with his chopping skills.

In 1989, at the age of 14, Jamie formed the band, ‘Scarlet Division’ with composer and musician, Leigh Haggerwood.

Oliver started his career as a pastry chef at Antonio Carluccio’s Neal’s Yard under his mentor Gennaro Contaldo, it was as a sous chef at ‘The River Cafe’ that Jamie Oliver was recognized and was catapulted onto a world cooking platform.

In 2000, he launched ‘Pukka Tukka’ on Channel 4 and signed a $2-million deal with the UK supermarket chain Sainsbury’s. Although it made him richer by $1.2 million every year, the relationship soured due to his disdain for supermarkets.

In 2003, the four-part sequel to ‘Jamie’s Kitchen’, ‘Return to Jamie’s Kitchen’ was launched. He was voted the ‘Most Inspiring Political Figure’ for the ‘Feed Me Better’ campaign that worked toward cutting out junk food in the diets of British schoolchildren.

‘Jamie’s 30-Minute Meals’ aired in 2010, focused on simple, home-cooked meals that could be assembled in 30 minutes. 2011 was a particularly hectic year for Oliver.

In 2012, he appeared on MasterChef Australia and scored higher than the three contestants he was up against. He also worked on ‘Jamie’s 15-Minute Meals’, ‘Jamie & Jimmy’s Food Fight Club’, and invested in the Maison Publique, Montreal.

In 2013, he became the chef and proprietor of ‘Jamie Oliver’s Diner’.

Here are some of the best highlights of Jamie Oliver’s career:

“What I’ve enjoyed most, though, is meeting people who have a real interest in food and sharing ideas with them. Good food is a global thing and I find that there is always something new and amazing to learn – I love it!” – Jamie Oliver

“My first outdoor cooking memories are full of erratic British summers, Dad swearing at a barbecue that he couldn’t put together, and eventually eating charred sausages, feeling brilliant.” – Jamie Oliver

“I think there are definitely two types of student: the academic kids and 50% who fail. It’s very clear to see – it’s a fact. We’re not doing enough for those who fail; they need a more physical, tactile approach, involving people skills, team-building, problem-solving, building things.” – Jamie Oliver

“It’s very clear that there’s a lot of double standards going on. Should there be a 30mph speed limit? Of course there bloody should. And certainly, with kids and school food, kids need to be nannied for sure. So give them a bloody good meal at school.” – Jamie Oliver

“I wouldn’t say that processed food, ready meals, and even takeaways aren’t relevant to modern life, it’s just that over the past 40 years there are three generations of people who have come out of school and gone through their home life without ever being shown how to cook properly.” – Jamie Oliver

Now that you know all about Jamie Oliver’s net worth, and how he achieved success; let’s take a look at some of the strongest lessons we can learn from him:

However, that led to some poor venue choices in “sub-optimal” locations, Will Wright, a partner at KPMG who was brought in to help restructure the business in 2017, told the FT.

Oliver, who left school at 16, has often said he relies heavily on others to help with the day-to-day running of his businesses. That’s common for entrepreneurs, particularly celebrities.

However, media reports about Jamie’s Italian raised questions about the suitability of those he appointed, hurting Oliver’s reputation in the process.

2. Success is Not Guaranteed

By the time Jamie’s Italian was set up, he already had an established following from his TV shows, cookbooks and flagship restaurant that hires underprivileged teenagers, Fifteen.

Yet that did not lead to guaranteed success for his new venture. The business is now attempting to bridge that disconnect by lowering prices to bring it in line with the rest of the Oliver brand.

Despite the setbacks, Oliver said he remains committed to his restaurant business and plans to rebuild it as he learns from his earlier failings.

“With Jamie’s Italian, we kind of got halfway there and then it all ran away,” he told the FT. “Now I am a bit more confident. We’re beginning to see a little bit of light at the end of a very dark year.”

How much is Jamie Oliver worth?

Jamie Oliver’s net worth is estimated to be $200 Million.

How old is Jamie Oliver?

How tall is Jamie Oliver?

Jamie Oliver is a famous British chef, restaurateur, author of cookery books, and media personality. He has also appeared on a number of food and cooking-related reality shows, where he was called for his expertise and guidance or as a judge.

What do you think about Jamie Oliver’s net worth? Leave a comment below.