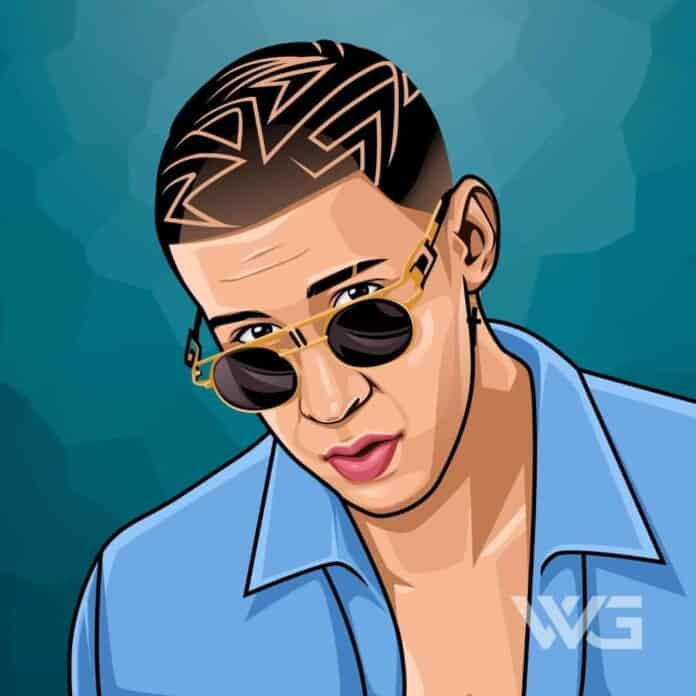 What is Bad Bunny’s net worth?

He is considered one of the pioneers of Latin trap music. His music is often defined as Latin trap and reggaeton, but he has incorporated various other genres into his music, including rock, bachata, and soul.

Benito Antonio Martínez Ocasio was born on the 10th of March, 1994, in San Juan, Puerto Rico. Ocasio was raised by his parents Benito Martínez and Lysaurie Ocasio Declet.

He started singing at a very young age after listening to an album of the famous reggaeton rapper, Vico C. By the time he was five, Bad Bunny had decided that he wanted to be a singer.

Bad Bunny had created a song called ‘Diles’ and uploaded it on the online audio distribution platform, SoundCloud. The song was heard by many, including music producer DJ Luian. Luian was impressed with Bad Bunny’s singing skills and hence signed him. Like many other artists before him, he jumped on the “SoundCloud rap” trend, which gave rise to many world-famous musicians, including XXXTentacion, Tekashi69, or Lil Xan.

He then collaborated with J Balvin and Prince Royce, and released a song titled ‘Sensualidad,’ which claimed the tenth spot in the ‘Hot Latin Songs’ chart. Bad Bunny also released his single ‘Tú No Metes Cabra’ on November 2017.

Bad Bunny’s collaboration with famous artists increased his popularity. He eventually became one of the most sought-after trap artists and started acquiring international audiences. After a while, his rise to stardom was solely self-driven, and with the release of his debut solo studio album, “X 100pre”, he established himself as a name to be reckoned with in the trap music world. It was recognized by Rolling Stone magazine as number 41 on their “100 Best Debuts of All Time” list. Bad Bunny is one of the most streamed artists on Spotify right now, and he snatched the number one spot on the streaming platform for both 2020 and 2021.

He has a massive fan following on his official Instagram account as well. On Spotify, Bad Bunny attracts over 50 million listeners every month. His most recent outing, “Un Verrano Sin Ti”, debuted at the #1 spot of the Billboard 200.

How Does Bad Bunny Spend His Money?

Bad Bunny earned quite a fortune in a very brief amount of time, and he’s definitely not complaining about the lack of opportunities for spending his money.

For starters, the Puerto Rican rapper is into fashion, and his unique style of blending hype streetwear clothing with tailored pieces made out of the highest quality materials is an inspiration to the next generation of up-and-coming Latin musicians. Surely, one cannot become a fashion icon for their community without spending a whole lot of money on clothes!

Bad Bunny also loves luxurious cars. He has a car collection that includes a Rolls Royce Dawn, Bugatti Chiron, and a Mercedes G-Wagon, alongside other vehicles. Just these three models must have cost him well over $5 million!

The rapper is also involved in skateboarding and professional wrestling. He made his first WrestleMania appearance in 2021. Even though it is widely known that the sport is staged, Bad Bunny still must have invested some money in personal trainers and dietitians in preparation for his wrestling debut.

Finally, Bad Bunny repeatedly stated that he loves his family more than anything. Even back when he was a teenager, he never understood the appeal of gangster culture and street life, simply because he preferred to spend time with his relatives. Seeing as he’s got two younger brothers, he definitely shells out quite a sum on presents whenever he comes back home to visit them!

Here are some of the best highlights of Bad Bunny’s career:

“I’ve always been surrounded by many great people and professors, but my family, especially my mom who was a teacher, was the person who encouraged me to study and pushed me to continue. When we’re young, we don’t understand why our parents bug us so much with school and doing homework, but it’s a blessing to have that support at home.” – Bad Bunny

“Obviously this song is an achievement for me in my career, but what makes me really feel good is to make Latinos feel proud. To provoke that pride that a pop figure and someone so big in music globally like Drake would sing with me completely in Spanish and create this hit ‘MIA.’ That’s the best part of it.” – Bad Bunny

“I grew up in a rural area called Vega Baja and I’m the first of so many talented people in this area to make it out. I take great pride to represent where I come from and I am able to show my fans and everyone who listens and watches me, that anything is possible.” – Bad Bunny

Now that you know all about Bad Bunny’s net worth, and how he achieved success; let’s take a look at some of the lessons we can learn from him:

1. People Will Criticize You

Some people will appreciate what you do, and there are people that will criticize what you do. Bad Bunny always remained true to his ideals and didn’t let the often toxic world of trap music change who he is. The rapper is well-known for his activism, most prominently voicing his outrage at the lack of humanitarian relief efforts after Hurricane Maria struck Puerto Rico, as well as his outspoken support for the LGBTQ+ community.

Money does not change people, people change. Despite rising to stardom in a relatively short period of time, Bad Bunny remained the same person he was back when he started uploading his early songs to SoundCloud. He remains connected to Puerto Rico and supports the local music industry there to this day.

3. The Space Of Change

You don’t have the same mentality as you did five years ago – or even one year ago. People are always changing, and Bad Bunny believes that everyone deserves the space to change and for people to recognize their change. He understands that ultimately, we are all flawed in one way or another and that people’s efforts to evolve and change their situation for the better should be praised, not shunned.

How much is Bad Bunny worth?

Bad Bunny’s net worth is estimated to be $18 Million.

How old is Bad Bunny?

How tall is Bad Bunny?

He is considered as the best trap artist of the current generation. Though his songs are predominantly in Latin or Spanish, world-renowned musicians like Enrique Iglesias have featured Bad Bunny in their respective songs.

What do you think about Bad Bunny’s net worth? Leave a comment below.

Kentavious Caldwell-Pope is a National Basketball Association player for the Denver Nuggets that was once a lottery pick in the NBA Draft by the Detroit Pistons.