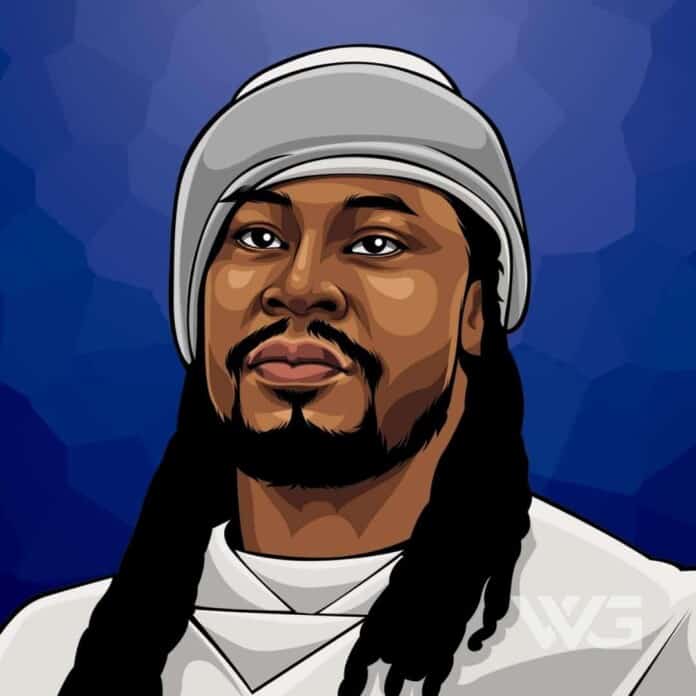 What is Marshawn Lynch’s net worth?

As of December 2022, Marshawn Lynch’s net worth is estimated to be $35 Million.

Marshawn Terrell Lynch is an American football running back who is currently a free agent.

Lynch was drafted by the Buffalo Bills in the 2007 NFL Draft. He earned the nickname “Beast Mode” for his powerful running style and consistent ability to run over defenders and break tackles.

Marshawn Terrell Lynch was born on the 22nd of April, 1986, in Oakland, California. He has three siblings. His mother Denise, who held a 200-meter track record at Oakland Technical High School, raised him alone.

Lynch attended Oakland Technical High School where he participated in track, basketball and wrestling matches in addition to football.

Marshawn Lynch began his football career by playing in his Oakland high school. At his university, he played for the California Golden Bears football team. In 2004, he was the primary backup to his senior J. J. Arrington, but in 2005, when Arrington graduated, he became the running back.

In 2006, Lynch was named to the 2006 All-Pac-10 team First team, where he won multiple awards. The following year, the Buffalo Bills selected him in the first round of the 2007 NFL Draft.

He signed a six-year contract worth $18.935 million. In his first season game in September, he gained 90 yards on 19 carries. In November, he helped the team win against the Cincinnati Bengals.

During his first season with Seattle, rushing for 573 yards over 12 games, he made up for his earlier struggles. The play cemented his playing style in NFL history, and his local fans referred to his moves as the ‘Beast Quake’.

In April 2017, Oakland Raiders lured Lynch to come out of his retirement. He agreed to a two-year contract. The Seahawks, who retained rights even after his retirement, traded him.

Here are some of the best highlights of Marshawn Lynch’s career:

“It doesn’t matter what you all think, what you all say about me, because when I go home at night, the same people that I look in the face, the family that I love, that’s all that really matters to me.” – Marshawn Lynch

“When you get to practice against the best, it brings the best out of you.” – Marshawn Lynch

“The so-called right to privacy, as it were, is no longer a right inasmuch as it is now a privilege, to be enjoyed until it is torn away at a moment’s notice.” – Marshawn Lynch

“When I go speak to these kids through my foundation and am able to sit down and tell them some of the things that I’ve been through, they can look up and relate to me, and they can understand the feelings I had that are similar to what they’re going through and feeling.” – Marshawn Lynch

View our larger collection of the best Marshawn Lynch quotes!

Now that you know all about Marshawn Lynch’s net worth, and how he achieved success; let’s take a look at some of the best lessons we can learn from him:

Smile your heart out to others because it makes everybody’s day brighter. The best life lesson of all!

2. Everything in Life Takes Time

Overcoming difficulties and reaching success. It doesn’t come in a matter of months. It takes years. So be patient. You will get there.

How much is Marshawn Lynch worth?

Marshawn Lynch’s net worth is estimated to be $35 Million.

How old is Marshawn Lynch?

How tall is Marshawn Lynch?

Marshawn Lynch is an American professional football player. In 2006, Marshawn Lynch was placed on the watch-list for the Maxwell Award and was named 8th best player in the nation by ‘Sports Illustrated.

As of December 2022, Marshawn Lynch’s net worth is roughly $35 Million.

What do you think about Marshawn Lynch’s net worth? Leave a comment below.