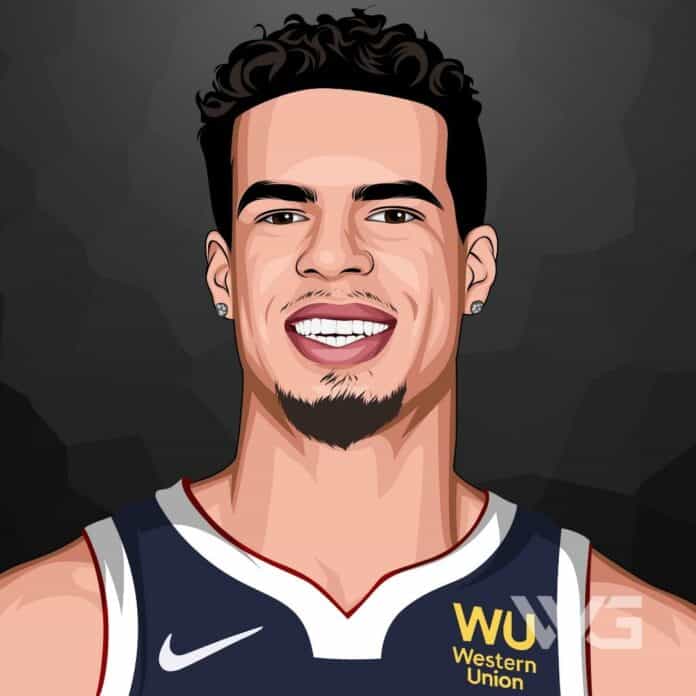 What is Michael Porter Jr.’s net worth?

Michael Porter Jr. is an American professional basketball player who is currently a small forward for the NBA’s Denver Nuggets.

Porter was the 14th overall selection in the 2018 NBA Draft after spending his college career with the University of Missouri.

Michael Lamar Porter Jr. was born June 29, 1998 in Columbia, Missouri and spent much of his youth in the city.

Porter attended both Father Tolton Regional Catholic High School in Columbia and Nathan Hale High School in Seattle, Washington, where he was an elite talent.

He was named Washington Mr. Basketball and took part in the McDonald’s All-American Game, winning the game’s MVP award over Trae Young and other future NBA players.

Porter was considered by some sources as the top high school player in the country and the five-star recruit had dozens of colleges offering him a scholarship.

However, Porter would return to his home city and play for the University of Missouri Tigers as his father had returned to their staff as an assistant coach.

Michael Porter Jr. spent just one season at Missouri and reached the NCAA Tournament, but did miss time due to a back injury.

Porter decided to forgo his final three seasons of NCAA eligibility with the Missouri Tigers and entered the 2018 NBA Draft.

Analysts said that Porter had the talent to be the number one pick, but injury concerns forced him to drop to the 14th overall selection with the Denver Nuggets calling his name.

Porter missed his first season due to the back injury, but has since proven that he’s an elite talent when healthy by averaging 20.8 points and 8.8 rebounds per 36 minutes in the league.

Michael Porter Jr. has seen plenty of playing time and is in the starting lineup alongside Nikola Jokic and Jamal Murray for the Nuggets.

Because Michael Porter Jr. was a first round draft pick, his initial salary was predetermined by the NBA’s rookie wage scale.

The entry level/rookie contract with the Nuggets was for four years and just over $15 million, with $6.2 million of that fully guaranteed.

The Denver Nuggets didn’t want Porter to get to free agency, so they signed him to a massive contract extension worth just under $180 million over five years.

Porter’s salary makes him the third-highest paid player on the Nuggets just ahead of Aaron Gordon and Kentavious Caldwell-Pope.

All of the money in Porter’s contract extension is guaranteed, and the first year earned him $30.9 million, with the maximum amount reaching $40.8 million in the fifth year.

As a result, Porter’s net worth has increased considerably, as he was worth about $10 million before signing his contract extension, but is now worth $30 million.

With his endorsement deals starting to come in more frequently and his contract paying him well over $30 million per year in the future, Michael Porter Jr’s net worth is set to skyrocket.

Michael Porter Jr. is the son of Lisa and Missouri assistant coach Michael Porter Sr. and was raised alongside his seven siblings in Missouri, including brother Jontay Porter.

Porter is currently believed to be single, does not have children, and has never been married, but has been in a relationship with actress Madison Pettis and TV personality Madison Prewett.

Michael Porter Jr. grew up as a vegetarian, but once he joined the Denver Nuggets, he began eating meat after he tried bacon for the first time.

From back in his amateur days, Michael Porter Jr. was considered one of the top players in the country and has been given a slew of awards.

Now with the Denver Nuggets, Porter is hoping to add to his resume, but needs to stay healthy to do so.

Here are the most prestigious awards and achievements in Michael Porter Jr.’s career:

Out of the individual achievements available in the NBA, Porter is really hoping to earn All-NBA honors as it would net him an extra $35 million.

As for the team accolades, Porter wants to win a championship with the Denver Nuggets, and the roster is built to contend each year.

How Does Michael Porter Jr. Spend His Money?

With his contract extension, Michael Porter Jr. is working toward moving up the richest NBA players in the world list.

Porter has an interesting living situation as he has not shopped for one of the most expensive houses in the world just yet.

Instead, he has been living with his family in Denver and is waiting for his contract extension to really kick in before spending millions on a new home.

As for vehicles, Porter doesn’t have the most expensive cars in the world but did purchase a new Tesla Model Y for his father for Christmas and is believed to have a Range Rover for himself.

There have been plenty of ups and downs during Michael Porter Jr.’s life in basketball, including multiple back surgeries.

When he’s been healthy, though, Porter has proven to be an elite talent on the basketball court and has had some memorable moments.

Here are some of the best highlights of Michael Porter Jr.’s career:

Porter has the opportunity to provide a lot more memorable moments if his third back surgery holds up and he can stay on the court.

The 2022-23 season got off to a good start for Porter as many said that he looked better than ever and is primed to reach his full potential.

Michael Porter Jr. has always been an outspoken player as he and his family have been around the game of basketball for decades.

Porter, who was considered the top player in his graduating class nationwide, is used to answering questions from the media and has given some memorable soundbites.

Here are our favorite quotes from Michael Porter Jr:

Basketball has essentially been Michael Porter Jr.’s entire life, as his father was involved as a coach, while his brother Jontay Porter is also a professional player.

Porter has traveled around North America as a result of his basketball career, and now plays for one of the richest NBA teams in the world..

Now that you know all about Michael Porter Jr’s net worth, there are a lot of lessons to be learned from the NBA star.

Here are some of the best success lessons to learn from Michael Porter Jr:

Michael Porter Jr. wouldn’t be where he is today if it weren’t for his strong family support, including his seven siblings.

Even after making it into the NBA and wielding a tremendous net worth, Porter opted to live with family members instead of a mansion on his own.

Porter still looks to his parents and siblings for guidance on a daily basis and it has helped him get through multiple back surgeries.

2. Life Is Bigger Than Work

While basketball has afforded Porter everything that he could want and more, he says that life isn’t just about basketball for him.

In an interview, Porter said that the world is a “messed-up place” and that people have their attention in the wrong areas.

Because of this, Porter’s faith is more important to him than anything else, and he feels that life outside of the sport is more crucial than being an athlete.

For a lot of athletes, having to go through three back surgeries would be considered a career death sentence, but Porter’s career is just getting started.

Even while he was playing in college, Porter was dealing with back issues that sidelined him for most of his one NCAA season.

Instead of admitting defeat, Porter has bounced back from each surgery and has shown that he’s still the great player everyone thought he was.

Michael Porter Jr. was one of the most hyped players to ever come out of high school, and he has certainly lived up to the billing when healthy.

A series of back injuries have hampered Porter’s production throughout his career, but that doesn’t mean that he hasn’t gotten paid.

The Nuggets are counting on him to live up to the contract that Porter signed and made him the franchise’s cornerstone player.

What do you think about Michael Porter Jr.’s net worth? Leave a comment below.