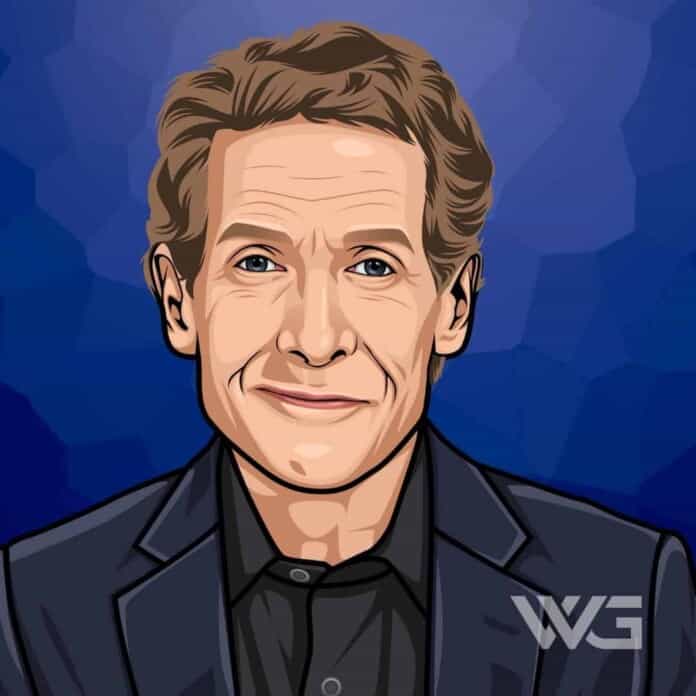 What is Skip Bayless’ net worth?

Bayless is best known for his work as a commentator on the ESPN2 show ‘First Take’ with Stephen A. Smith. Bayless debuted his new show ‘Skip and Shannon: Undisputed with Shannon Sharpe‘ on Fox Sports 1 in 2016.

John Edward “Skip” Bayless II was born on the 4th of December, 1951, in Oklahoma. His father began calling him Skip as in “skipper of the ship.” He was never called John by his parents.

His parents owned the Hickory House restaurant in Oklahoma, which specialized in barbecue. Bayless worked there when he was younger but never considered it as a career path. His younger brother carried on the family tradition and became a chef.

After graduating, Skipp found work at “The Miami Herald” where he wrote sports features for two years. After this, he moved to Los Angeles Times in 1976 and became well known for his journalism. During this period, some of his notable stories involved the Los Angeles Dodgers and their collective resentment of Steve Garvey.

The following year, he won an Eclipse Award For “Outstanding Newspaper Writing.” When he was 26 years old, he moved to “The Dallas Morning News.”

He has published numerous books throughout the years. At the end of the 1990s, he started writing for the Chicago Tribune after 17 years working in Dallas. Bayless is also known for his work on radio. He was often a guest for ESPN’s radio show ‘The Fabulous Sports Babe.’

His TV career started in the 90s when he joined ESPN’s ‘The Sports Reporters.’ At the beginning of the 2000s, he was a regular guest on ‘The Last World,’ which aired on Fox Sports Net.

In 2016, he left ESPN behind and accepted a new contract with Fox Sports. He appeared in shows such as ‘Skip and Shannon: Undisputed alongside his longtime colleague, Shannon Sharpe. Outside these TV appearances, he booked cameos in films including ‘Rocky Balboa.’

Here are some of the best highlights of Skip Bayless’ career:

“Interviewing Michael Jordan is like playing him one on one. If he respects you and especially your media platform and he’s amused by your college try, he’ll let you get off a shot or two. Then he’ll go behind his back, give you a head fake and leave you wondering exactly what he meant by this and that.” – Skip Bayless

“If the NFL can keep getting away with forcing players to wait three years out of high school before they’re drafted – three! – the NCAA should be made to do away with its rules against paying players beyond the room, board, and tuition. I’m not talking about some token, $2,000-a-year ‘spending money’ stipend for every player.” – Skip Bayless

“During games, I love a Twitter-rocking dunk as much as the next NBA nut. But now, I’d slightly rather see a crowd-detonating (or crowd-silencing) 3-pointer, either off four or five whip-whip passes or (even better) off a steal and a one-on-two pull-up on a solo fast break. No shot in basketball can be more psychologically devastating.” – Skip Bayless

“I’ve long been offended by not-so-godly pro football players I’ve known who showed up for pregame chapel – Sunday-only Christians rubbing the proverbial rabbit’s foot – then after victories declared it was ‘God’s will’ that their team won.” – Skip Bayless

“When the NBA first resorted to it in 1979, I must admit I thought it was a circus rule, the equivalent of asking players to be shot out of cannons or swallow swords, something borrowed from the stepchild ABA with its red, white, and blue basketballs. A 3-point line? The beautiful game of basketball didn’t need a clown shot.” – Skip Bayless

Now that you know all about Skip Bayless’ net worth and how he achieved success; let’s take a look at some of the lessons we can learn from him:

Skip Bayless’ career ish is life and his huge passion. It’s not a job. It’s his life. Find your passion.   When you have passion for something, you tend not only to be better at it, but you will have to work harder at it too.

Great is great, no matter the age. Sometimes age succeeds, sometimes it fails. It all depends on YOU.

The great ones are about winning and winning only.  Winning isn’t something that happens on the field when the whistle blows and the crowd’s roar. Winning builds physically and mentally every day you work on yourself and every night you dream.

How much is Skip Bayless worth?

Skip Bayless’ net worth is estimated to be $17 Million.

How old is Skip Bayless?

How tall is Skip Bayless?

Skip Bayless is an American sports columnist who is perhaps best known for his work as a commentator on the ESPN2 show ‘First Take.’

After he left ESPN in 2016, he started hosting his own show on Fox Sports titled ‘Skip and Shannon: Undisputed.’ Over the years, he has developed a reputation for being a commentator that “pulls no punches.” He is a favorite among fans because of his ability to debate virtually anyone on any sports-related subject.

What do you think about Skip Bayless’ net worth? Leave a comment below.