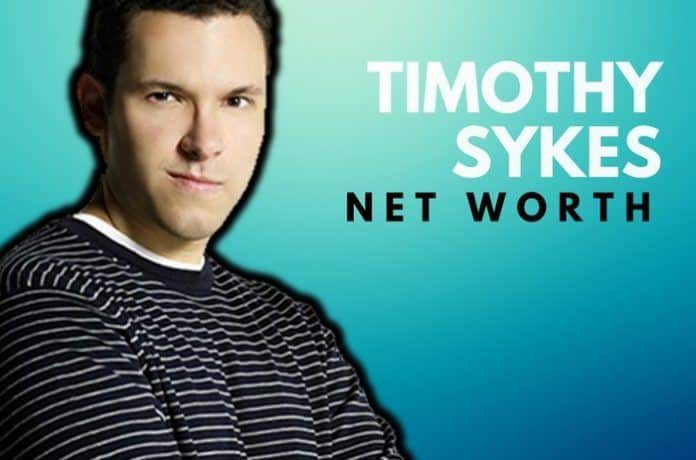 What is Timothy Sykes’ net worth?

Timothy Syke’s net worth is estimated to be $15 Million As of November 2022, and can you believe he built a large quantity of this solely through penny stocks?

He likes to pose in his orange Lamborghini, fly in private jets, and stay in presidential suites. But, he is not just another wealthy businessman. He didn’t earn his fortune in a famous exchange by trading in stocks of giant companies.

Unlike many others, he encourages people to follow in his footsteps, and doesn’t keep his wealth and secrets to himself.

I Dreamed a Dream

Sykes dreamed of being a tennis player, but an injury prevented him from making a career out of it.

As it turns out, this was for the better. His life changed when he used his Bar Mitzvah gift money to begin trading in penny stocks while still in college. He sure surprised his parents who thought he was going to lose it all.

Instead, he earned $100,000 over a weekend and took his entire college dorm to dinner. This was however only the beginning, as he wanted to be much more than a simple campus celebrity.

He became a millionaire by the age of 22, and started a hedge fund during his senior year. No wonder he skipped some classes and missed his graduation day.

What makes his success so impressive is the fact that he pulled it off by trading in cheap and volatile stocks. Called penny stocks, they are sold over the counter, not an exchange.

You won’t find any shares from Apple and Google here, only anonymous small companies with a dubious present and an obscure future.

Still, if they hit big, their value doubles or triples in a matter of days, even hours. Also, it helps that there is little competition here.

The big fish don’t dwell in these muddy waters, and the small ones that do, make the mistake of seeing penny stocks as lottery tickets. But one man knew better.

He didn’t want to gamble, but to do business. He did the research and managed to find profitable stocks against all odds. Tim likes to say that you must be quick and have a finger on the trigger. The window of opportunity lasts only a few days, so hesitation is not an option.

Who Wants to Be a Millionaire?

The best thing about success is that it can be contagious. Some will take their magic formula to their grave, but not Tim Sykes.

He shares his secrets and wants to help others learn how to win their own fortune.  He is all over Twitter, Facebook and other social and business networks getting the word out.

His teaching business is so successful that it surpasses the money he makes on stock trading.  He is a financial activist and educator with many students around the globe. Many of them are already successful traders in their own right.

He created Profit.ly, a community of over 60,000 traders sharing their information, tips and stories. Thousands more receive his e-mail tips, newsletter and access to video lessons.

Everybody seems to want a piece of Tim, and to find out which stock he is looking at at the moment.

So, how has he used all his money besides expensive cars and houses? Well, as any wise man would. He traveled to more than 80 countries around the world to meet successful and inspiring people.

No matter how many prizes and acclaim you win, you can always do better if you work on self-improvement. Tim of course know this only too well.

When life deals you an average hand of cards, you can whine for better ones.

Or you can make the most of the ones you have. Trading in penny stocks many seem as being a gamble, but the one who will ultimately win a fortune is the businessman with a laptop at hand, tolerance for risk and an appetite for success. Go ahead, learn from the best and start making money now.

At last, you have someone to show you how.

“Studying the past, seeing what worked before, because then you can be better prepared for the present and you can get wealthier in the future.” – Timothy Sykes

“You can learn and you can make money from anywhere in the world. Learn what you love and focus on it.” – Timothy Sykes

“Don’t work for somebody else’s dream. We’re all human, we all make mistakes, we all learn.” – Timothy Sykes

How much is Timothy Sykes worth?

Timothy Sykes’ net worth is estimated to be $15 Million.

How old is Timothy Sykes?

How tall is Timothy Sykes?

Timothy Sykes has become an ultra-successful stock trader, and has earned millions all through penny stocks!

What do you think about Timothy Sykes’ net worth? Leave a comment below.