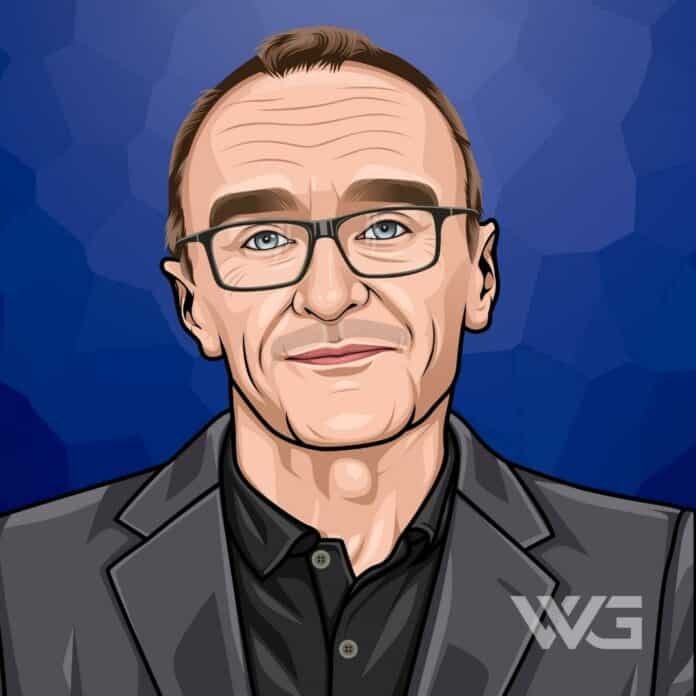 What is Danny Boyle’s net worth?

Danny Boyle is one of the most well-known English directors, responsible for some of the best modern masterpieces.

Still working on films today, Boyle has accumulated an impressive fortune that is increasing yearly, and we don’t expect him to retire any time soon.

Growing up in a working-class Catholic family, Danny served as an altar boy for eight years, and his mother pushed him towards priesthood.

However, Danny was ultimately persuaded by a priest not to transfer to a seminary, and soon after, he began to involve himself with drama.

Boyle attended Thornleigh Salesian College, a Catholic secondary school in Bolton, before studying English and Drama at the University College of North Wales.

After graduating, Boyle briefly worked with the Joint Stock Theatre Company before transferring to the Royal Court Theatre in 1982.

During this time, Boyle also directed five plays for the Royal Shakespeare Company before moving into television in 1987.

Boyle directed for BBC Northern Ireland for a couple of years before landing the opportunity to direct his first film, Shallow Grave.

Following the success of Shallow Grave in 1994, Danny Boyle directed Trainspotting, a film that is often considered one of the greatest British films of the 20th century.

Boyle’s next big project was The Beach in 2000, starring Leonardo DiCaprio, followed by 28 Days Later, a post-apocalyptic horror film.

In 2008, Boyle directed arguably his most successful film, Slumdog Millionaire, which earned him eight Academy Awards and seven BAFTA Awards.

While the film was a critical success, Boyle did face some criticism for his portrayal of India through a Westernized lens, though he argued that it showed the country’s “resistance” and “lust for life.”

In 2010, Boyle directed 127 Hours, starring James Franco and based on Aron Ralston’s autobiography Between a Rock and a Hard Place.

This film earned him eight Academy Award nominations, though he failed to win any.

In 2015, Boyle was able to direct Steve Jobs, a biopic about the late founder of Apple, which he followed up with a sequel to Trainspotting, T2 Trainspotting.

Although he was briefly attached to an untitled James Bond film, Boyle reportedly dropped out in 2018 due to a disagreement about the script.

His most recent project sees him taking on the Sex Pistols in a series revolving around the iconic punk band’s formation.

Danny Boyle falls just shy of being one of the richest directors in the world, but that doesn’t mean he hasn’t earned a significant amount of money for his talents.

Although he has never made public his earnings for a vast majority of his projects, we can look at what his films have earned to get an idea of his earning potential.

We can safely assume that Danny Boyle was able to earn millions from each of these films, fueling the growth of his substantial net worth.

Danny Boyle was in a long-term relationship with Gail Stevens from 1983 to 2003, and with her, he has three children; Gabriel, Grace, and Caitlin.

While he tends to stay tight-lipped about his personal life, his official Facebook page is often updated with news about his projects.

We also know that Boyle serves as the patron of Early Break, a charity that focuses on substance abuse in young people.

He is also the patron of the UK-based African arts charity Dramatic Need, which hosts workshops in underdeveloped areas to help teach people to use art as a form of expression, empowerment, and development.

As a director, Danny Boyle has won many awards throughout his long career behind the camera.

While he has won many accolades, some have been much more prestigious and important than others.

Here are some of Danny Boyle’s most significant awards:

Boyle’s most awarded film has been Slumdog Millionaire, which earned him 37 awards all on its own.

How Does Danny Boyle Spend His Money?

Although Danny Boyle doesn’t flaunt his wealth, the public was able to catch a glimpse of how he spends his money when he put his Chelsea flat on the market in 2016.

The $2.15 million penthouse was bought by Boyle in 2010 for $1.7 million, after which he transferred ownership to his daughter Caitlin Boyle.

While it may not seem impressive on the outside, this home has three bedrooms, a fireplace, and a glass solarium that leads to a private terrace.

Danny Boyle also bought a home in 2009 for Azharuddin Ismail, who played the young version of Salim in Slumdog Millionaire.

After learning that the young boy’s family had been forced to leave their shanty town after it had been demolished, Boyle flew to Mumbai and bought a $35k apartment near Azharuddin’s school.

Additionally, Boyle and his producer Christian Colson set up the Jai Ho Trust to help aid Azharuddin until he turns 18.

Danny Boyle has enjoyed a lot of success throughout his career and has earned dozens of awards for his work.

However, some points in his career have been higher than others, and these particular milestones are the ones that warrant mentioning.

Here are some of the best highlights of Danny Boyle’s career:

While his name may not be as well-known to mainstream audiences as James Cameron, these career highlights emphasize just how incredible his career has been.

While he may not be a writer, Boyle has a way with words, which can be seen in almost every interview he’s done.

Even if you’re not a connoisseur of his films, there is something insightfully inspiring about Danny Boyle.

Here are our favorite quotes from Danny Boyle:

There are many things we can learn from Danny Boyle about succeeding in our own endeavors.

Now that you know all about Danny Boyle’s net worth, we can look at what he can teach us about finding success with our own goals.

Here are some of the best success lessons to learn from Danny Boyle:

Not everyone enjoys being a leader, but it can be a necessary skill if you want to be successful.

Start small and gradually build your confidence so that you will be ready to guide others when the situation calls for it.

2. Don’t Let Ego Get In The Way Of Progress

Ego can get in the way of many things if you let it get out of hand.

While it’s important to be proud of your accomplishments, if you let them inflate your ego too much, it will only be detrimental to your personal progress.

Laugher is one of the best ways to keep yourself from burning out, and it isn’t something you should put on the back burner.

Whether you’re watching a comedy film after work or popping on a funny cat video while your boss isn’t looking, finding time to laugh is just as important as working hard.

Danny Boyle is one of the most accomplished directors in the world, and he is responsible for some of the greatest modern masterpieces.

Fortunately for his fortune and his fans, Boyle isn’t ready to retire just yet, and we expect to see much more from him in the future.

Be sure to check back regularly, so you don’t miss any updates regarding Danny Boyle’s growing net worth!

What do you think about Danny Boyle’s net worth? Leave a comment below.