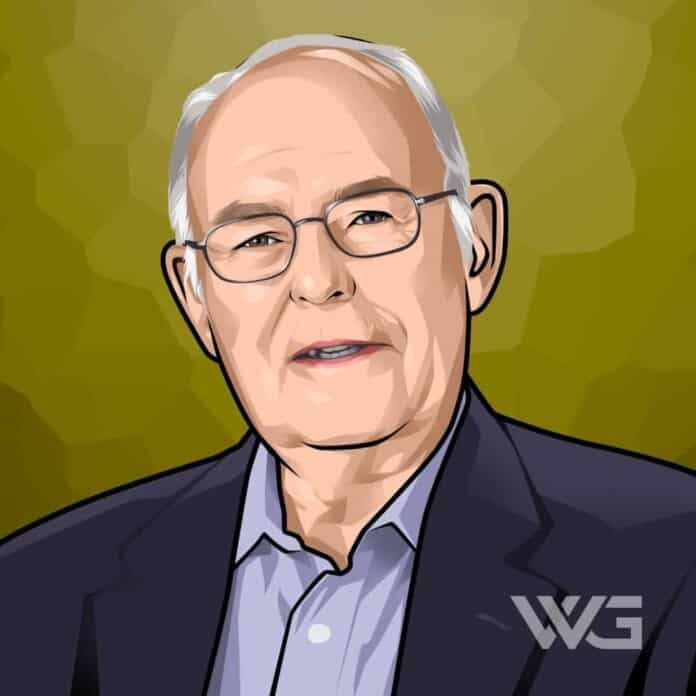 What is Gordon Moore’s net worth?

Gordon Moore is an American businessman, engineer, and co-founder.

He is the chairman of Intel Corporation. Moore is also the author of ‘Moore’s law’. In 1954, Moore did his Ph.D. in Chemistry and a Physics minor from the California Institute of Technology.

He had never thought of becoming an entrepreneur. He wanted the peaceful life of an academic however the future held other plans for him.

Gordon Earle Moore was born on the 3rd of January, 1929, in Francisco, California.

Moore completed his schooling at ‘Sequoia High School’ located in Redwood City and then enrolled at ‘San Jose State University.

He then joined the ‘University of California’, Berkeley, and in 1950, he completed his B.Sc. degree in chemistry. Moore conducted postdoctoral research at the Applied Physics Laboratory at Johns Hopkins University from 1953 to 1956.

Moore collaborated with physicist William Shockley and worked with him at the ‘Shockley Semiconductor Laboratory’ which was a section of the company ‘Beckman Instruments.’

However, in 1957, a group consisting of eight people who were inducted into the laboratory by Shockley parted ways with the laboratory, and Moore was one of them. This group of eight talented Ph.D. graduates was together termed as the ‘Traitorous eight.’

A decade later, Moore made some changes in the observation and stated that the trend would follow every two years instead of one year. This has been significant and has largely helped the semiconductor industry.

He founded ‘NM Electronics’ in 1968, along with business personality Robert Noyce. This company later went on to become the renowned ‘Intel Corporation.’

From 1991 to 1996, he was engaged with the biotechnology company ‘Gilead Sciences’ as a member of the Business Advisory Board. He was then made one of the members of the Board of Directors of the company.

As of December 2022, Gordon Moore’s net worth is estimated to be roughly $7.1 Billion.

How Does Gordon Moore Spend His Money?

Moore spends some of his money on one of his real estate in Hawaii.

Here are some of the best highlights of Gordon Moore’s career:

“Yes, from the time I was in junior high school, I decided I wanted to be a chemist. I didn’t quite know what a chemist was, but I kept it up and got my Ph.D. in physical chemistry.” – Gordon Moore

“I remember the difficulty we had, in the beginning, replacing magnetic cores in memories, and eventually we had both cost and performance advantages. But it wasn’t at all clear in the beginning.” – Gordon Moore

“The technology at the leading edge changes so rapidly that you have to keep current after you get out of school. I think probably the most important thing is having good fundamentals.” – Gordon Moore

“With engineering, I view this year’s failure as next year’s opportunity to try it again. Failures are not something to be avoided. You want to have them happen as quickly as you can so you can make progress rapidly.” – Gordon Moore

“Well, I couldn’t even utter the term “Moore’s Law” for a long time. It just didn’t seem appropriate. But as it became something that almost drove the semiconductor industry rather than just recording its progress, I became more relaxed about the term.” – Gordon Moore

“Oh, 20 years or so. It really took a long time. But now it is well established. A while back, I googled “Moore’s Law” and “Murphy’s Law” and discovered that Moore’s Law had more references than Murphy.” – Gordon Moore

Now that you know all about Gordon Moore’s net worth and how he achieved success; let’s take a look at some of the lessons we can learn from him:

Starting a company just because the market is hot is probably not the best reason. To succeed at anything, you have to differentiate yourself from the pack – to offer your customers something they can’t get anywhere else. Be essential. Words to live by.

Moore got interested in science by playing with his neighbor’s chemistry kit. He even had a home lab, where he’d tinker and play a scientist. Play and experiment with your hobbies.

It’s easy to feel pressured into pretending like you’ve got a pulse on everything. Answers are just a Google search away, after all. Admitting when you’re clueless about something can be tough and downright humbling, but it can often lead to more interesting – and human – interactions

How much is Gordon Moore worth?

Gordon Moore’s net worth is estimated to be $7.1 Billion.

How old is Gordon Moore?

How tall is Gordon Moore?

Gordon Moore is best known as the co-founder of the ‘Intel Corporation.’ He has been an instrumental figure in technology and has achieved many accolades with his exceptional endeavors.

He may be best known for a rather simple observation. In 1965, for a special issue of the journal Electronics, Moore was asked to predict developments over the next decade.

What do you think about Gordon Moore’s net worth? Leave a comment below.