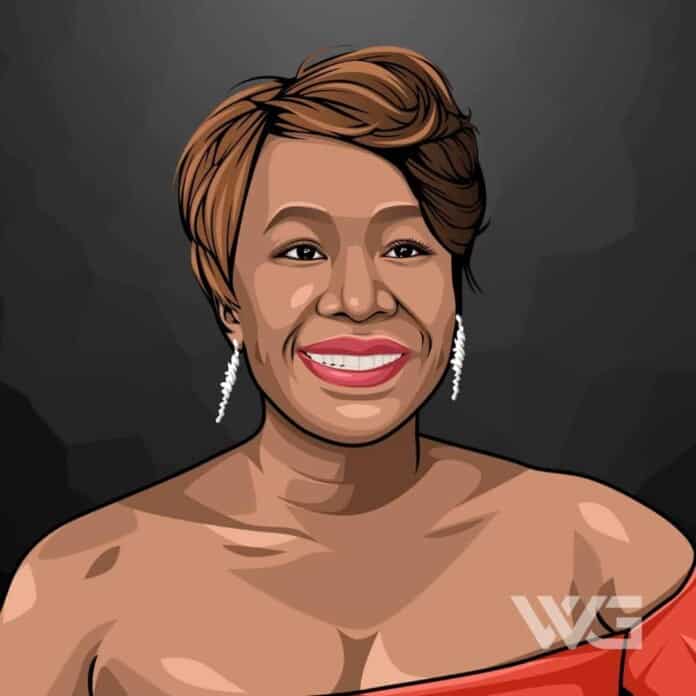 What is Joy Reid’s net worth?

Joy Reid is an American television host and political commentator.

In 2016, The Hollywood Reporter described Reid as one of the political pundits. She has written several books, and one of her most notable books is Fracture: Barack Obama, the Clintons, and the Racial Divide’.

In 2019, she published the book ‘The Man Who Sold America: Trump and the Unraveling of the American Story.’

As of November 2022, Joy Reid’s net worth is estimated to be roughly $4 Million.

Joy Reid was born on the 8th of December, 1968, in New York. Reid’s father was from Congo, and her mother from Guyana. She was raised in Denver until the age of 17. She graduated from Harvard University in 1991.

In 2013, Reid recalled that her college experience was a quick immersion into a demographically opposite place from where he lived and grew up.

She had to learn how to live with roommates and people that were not her family. She paid her own bills and tuition while at Harvard.

In 1997, Reid started her journalism career. She left journalism in 2003 to work with the group America Coming together to oppose President George W. Bush and Iraq War. She then went on to broadcast as a talk radio host.

She is the author of ‘Fracture: Barack Obama, the Clintons, and the Racial Divide,’ published in 2015. In 2017, she was ranked 4th among Twitter’s top tweeted news outlets and most tweeted journalist.

MSNBC announced that Reid would host ‘The ReidOut’ in 2020. This makes her the first black female primetime anchor. She also teaches a Syracuse University class in New York City.

How Does Joy Reid Spend Her Money?

Joy Reid is a very successful woman, and this explains her massive net worth. Reid likes to spend her money on jewelry and fashion designer clothes when it comes to spending money.

Joy Reid and her husband previously lived in a beautiful home in Pembroke Pines, Florida. As of today, the couple has an apartment on Manhattan’s Roosevelt Island.

Joy Reid loves jewelry, and she often switches up her pieces based on her clothes’ pattern. She is a big fan of wearing jewelry from Opal Stone. She owns a big collection of luxury brands in her wardrobe as well.

Here are some of the best highlights of Joy Reid’s career:

“Bill Clinton had a hell of a first 24 months, even though he, like Trump, enjoyed a congressional majority. Scandal after scandal befell the White House, including the failure of Hillary Clinton-led healthcare reform. But Clinton’s scandals, from ‘file gate’ to ‘travel gate’ to a brouhaha over a haircut, were petty, personal and domestic.” – Joy Reid

“Ailes built the Kingdom of Yes. That was his genius. He understood the id of many white conservatives – their sense of constant persecution and victimization; and their existential fears of an America whose racial makeup, sexual mores, and gender roles were careening in the opposite direction of the country of their childhood.” – Joy Reid

“If politics were a high school movie, Republicans would be the jocks and mean girls locking hapless freshmen inside their lockers and threatening to call in their rich parents if the teachers complain – plus the broke kids who are always willing to strong-arm homework for them from the nerds.” – Joy Reid

“President Barack Obama read to a certain portion of white America as an unending attack on white Christian identity, centrality, and cultural relevance. In their minds, he was seeking to end their right to bear arms and the right of conservatives to speak freely.” – Joy Reid

“There is a twinge of abandonment that comes with being a member of the African Diaspora. But ‘Black Panther’ fearlessly introduces and then complicates this and other deeply held albeit rarely expressed emotions; that indeed is what makes this film so profoundly innovative.” – Joy Reid

Now that you know all about Joy Reid’s net worth and how she achieved success; let’s take a look at some of the best lessons we can learn from her:

Freedom is neither guaranteed nor automatic, not even in the United States. Left unguarded, it can slip away like a thief in the night.

Popularity has always been the key currency in choosing a president.

If you’ve never feared the police – if you don’t get a dull ache in the pit of your stomach when you see red and blue flashing lights, even when you know you’re not doing anything wrong – consider yourself lucky.

How much is Joy Reid worth?

Joy Reid’s net worth is estimated to be $4 Million.

How old is Joy Reid?

How tall is Joy Reid?

Joy Reid is a well-established cable television host who was born in Brooklyn, New York. Reid is a journalist as well who graduated from Harvard University.

As of today, she serves as a national correspondent for MSNBC. Throughout her career, she has authored books such as ‘Fracture: Barack Obama, the Clintons, and the Racial Divide’ and ‘The Man Who Sold America: Trump and the Unraveling of the American Story.’

As of November 2022, Joy Reid’s net worth is estimated to be roughly $4 Million.

What do you think about Joy Reid’s net worth? Leave a comment below.