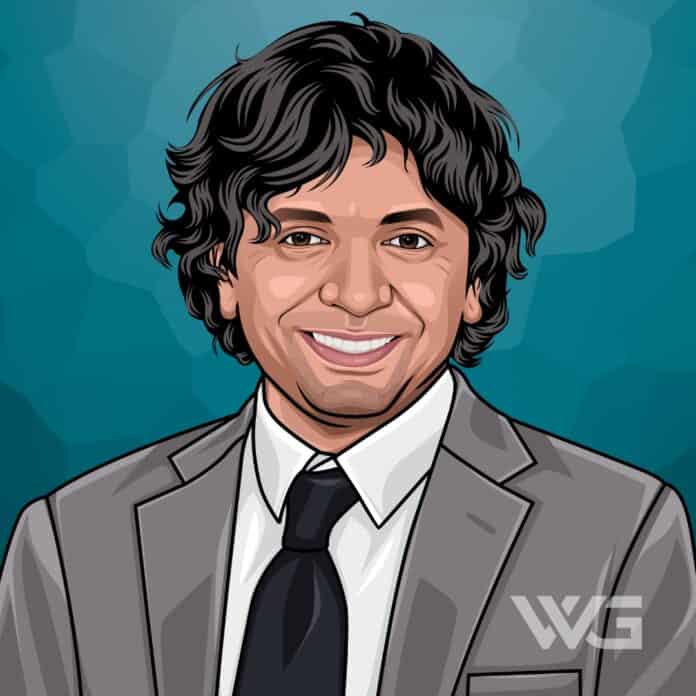 What is M. Night Shyamalan’s net worth?

Manoj Shyamalan is an American film director, screenwriter, and actor who has earned a massive net worth throughout the course of his career.

Best known for his original films with supernatural elements, Shyamalan continues to grow his fortune as one of the most prolific directors in Hollywood.

Shyamalan’s parents immigrated to the United States when he was just six weeks old, and he grew up in Penn Valley, Pennsylvania.

After graduating, Shyamalan attended the New York University Tisch School of the Arts in Manhattan, graduating in 1992.

During his time at New York University, Shyamalan made his first film, a semi-autobiographical drama called Praying with Anger.

He later wrote and directed his second movie, Wide Awake, in 1998, earning him a Young Artist nomination for Best Drama.

In 1999, Manoj Shyamalan co-wrote the script for Stuart Little and later revealed that he was the ghostwriter for the film She’s All That.

The same year, Shyamalan gained critical acclaim for directing The Sixth Sense, which quickly became the second-highest-grossing horror movie of all time.

Following this success, in 2000, Shyamalan directed a comic book thriller called Unbreakable, which also went on to be a financial and critical success.

In 2002, he directed Signs, another huge hit where he also had a cameo as the character Ray Reddy.

His next film was The Village, and while it received negative reviews, it still grossed $257 million on a $60 million budget.

His next biggest hit came in 2017 when he directed Split, which ended up grossing $279 million on a $9 million budget.

In 2021, Shyamalan announced that his next major film would be Knock at the Cabin in 2023.

Manoj Shyamalan has worked his way up to become one of the richest directors in the world, and he has earned a fortune directing and writing films.

While we don’t have information on everything he has made during his career, we do know about some of his largest gains.

He may not be a billionaire like director George Lucas, but Manoj Shyamalan has certainly earned a lot of money from his time behind the camera.

Manoj Shyamalan married his wife, Bhavna Vaswani, in 1992, who he met as a student at New York University, and together they have three daughters, Ishana, Shivani, and Saleka Shyamalan.

A fan of football, Shyamalan is a season ticket holder for the Philadelphia 76ers and tries to watch as many games as he can.

On social media, Manoj is active on his official Twitter account, where he promotes his projects and updates fans on upcoming films.

He can also be found on his official Instagram account, where he posts photos from his movie sets and of his filmmaking process.

Manoj Shyamalan has won and been nominated for many awards throughout his career for his incredible skills behind the camera.

Despite his many accolades, some of his achievements have stood out more than others due to their prestige.

Here are some of the best awards and nominations of Manoj Shyamalan’s career:

While he may not have earned as many awards as James Cameron, Manoj Shyamalan has certainly earned a large share of accolades, which have helped make him a household name.

How Does M. Night Shyamalan Spend His Money?

Manoj Shyamalan bought a 125-acre estate in Philadelphia called Ravenwood for $17.9 million in 2005.

This Georgian Revival home was renovated by Shyamalan and his wife with the help of Richard Cameron, a designer specializing in historical remodels.

The renovations resulted in 12,000 sqft of living space being added to the 15,000 sqft home, and a new two-story addition was added along with a 17th-century-inspired gatehouse.

In 2012, it was reported that Shyamalan sold a Manhattan penthouse, and while it wasn’t one of the most expensive penthouses in the world, the original asking price was $16 million.

With a net worth like his, Shyamalan enjoys a life of unprecedented luxury that most people can only dream of.

Manoj Shyamalan has enjoyed a lot of success during his career, which has helped make him one of the most well-known directors in the world.

However, some of his most important milestones stand out more than others for their impact on his fame and fortune.

Here are some of the best highlights of M. Night Shyamalan’s career:

While these are just a few of his greatest achievements, they are the ones that highlight just how significant his career has been in Hollywood.

Manoj Shyamalan is a phenomenal director, and he isn’t afraid to take pride in what he has accomplished.

Although he isn’t haughty about his achievements, Shyamalan isn’t one to shy away from taking pride in his work and admitting his success.

Here are our favorite quotes from M. Night Shyamalan:

There is a lot that we can learn from Manoj Shyamalan and his remarkable directorial career.

Now that you know all about Manoj Shyamalan’s net worth, we can take a look at what he can teach us about reaching our own goals.

Here are some of the best success lessons to learn from Manoj Shyamalan:

1. Don’t Be Afraid To Take Risks

No one ever becomes successful without taking a few risks, and it is something you need to learn to do wisely.

This doesn’t mean you should throw your life savings at something, but rather take calculated risks that could fail but have the opportunity for a big payoff.

If you want to become successful, you need to know yourself, specifically your strengths and weaknesses.

This way, you will know how best to market your skills and what you need to work on or ask for help with.

Your intuition can be a great tool if you’re willing to use it, and it is something you should learn to trust.

If something seems too good to be true or if you have a bad feeling about an opportunity, take extra time to examine it before jumping head first.

Manoj Shyamalan has built a successful career as a director, and he has earned millions as a household name.

While he has been active since 1992, he is still continuing to grow his net worth every year as he directs new projects.

Make sure to check back often so that you can stay up-to-date on Shyamalan’s wealth and career.

What do you think about M. Night Shyamalan’s net worth? Leave a comment below.