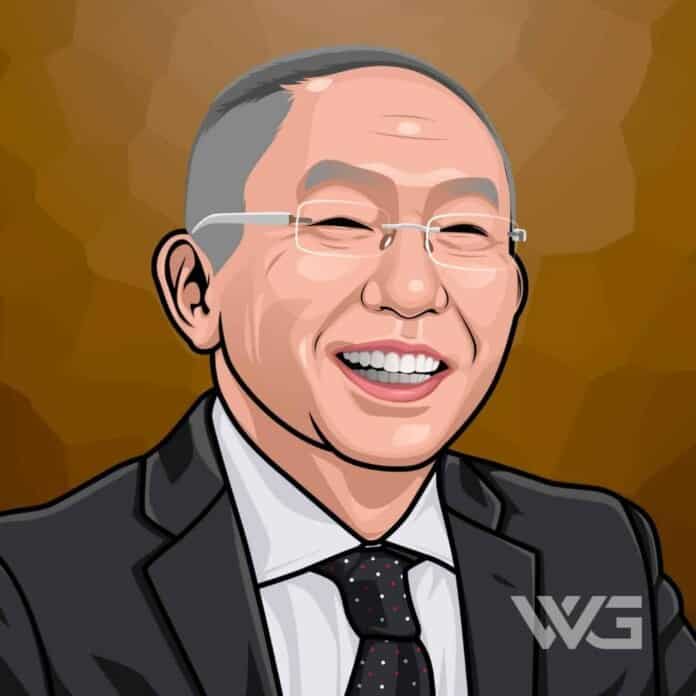 What is Tadashi Yanai’s net worth?

Tadashi Yanai is a Japanese billionaire.

He is the founder and president of Fast Retailing, the parent company of Uniqlo. As of this year, he was the richest person in Japan, with an estimated net worth of US$42.0 billion & the 34th wealthiest person in the World according to Bloomberg Billionaires Index.

Tadashi Yanai was born on the 7th of February, 1949, in Ube Yamaguchi. Yanai graduated in 1971 with a Bachelor’s degree in Economics and Political Science.

Yanai’s uncle was an activist for the minority group known as Burakumin, who have continued to suffer caste-based discrimination in employment and marriage in modern Japan.

In 1971, Yanai started a business by selling kitchenware and men’s clothing at a JUSCO supermarket. The following year, at JUSCO, he quit and joined his father’s roadside tailor shop.

In 1984, he opened his first Uniqlo store in Hiroshima 1984 and changed the name of his father’s company Ogori Shoji to Fast Retailing in 1991.

Yanai has stated: “I might look successful, but I’ve made many mistakes. People take their failures too seriously. You have to be positive and believe you will find success next time.”

He stepped down from the board of Softbank after 18 years as an independent director at the Japanese technology conglomerate. He won the International Retailer of Year award for 2010 from the National Retail Federation in the US.

Yanai was the fourth Japanese national to win the prize. Masatoshi Ito, owner and honorary chairman of the Ito-Yokado retailing group, also won the prize once.

Yanai was chosen as best company president in a survey of Japanese corporate executives by the Sanno Institute of Management in 2008 and 2009.

How Does Tadashi Yanai Spend His Money?

Yanai spends some of his money on lavish real estate homes.

Yanai lives in a massive 16,586-square-foot property outside Tokyo.

The mansion was bought in 2001, and it’s worth $78 million, and it comes with a driving range and a tea house. He also owns a $74 million house in an affluent area in Shibuya.

Here are some of the best highlights of Tadashi Yanai’s career:

“I might look successful, but I’ve made many mistakes. People take their failures too seriously. You have to be positive and believe you will find success next time.” – Tadashi Yanai

“If you always think about your dreams or goals, work steadfastly towards them and continue to challenge yourself, you will definitely be able to realize those dreams or goals.” – Tadashi Yanai

“As a businessperson, I don’t have the power to change the government. That is in the hands of the political leaders. However, as a taxpayer, we have the right to be critical of the government and demand change.” – Tadashi Yanai

“Konosuke Matsushita was a visionary entrepreneur. He started working very young as a teenager, and he eventually created Panasonic to become a truly global company.” – Tadashi Yanai

“Wal-Mart is an amazing success story. What I particularly admire very much about the late Sam Walton was his policy of valuing his employees. Giving value to employees is very rare in the retail industry. I also admire the strategies Walton used to build up his discount store concept.” – Tadashi Yanai

“This is the first time since the dawn of history that an infectious disease has spread across the globe at as fast a pace like this. Many people say that the world will be divided due to the virus crisis, but, on the contrary, I feel that we — and the world — are increasingly interconnected.” – Tadashi Yanai

Now that you know all about Tadashi Yanai’s net worth and how he achieved success; let’s take a look at some of the lessons we can learn from him:

People say that globalization has negative aspects, but Yanai doesn’t believe globalization is bad. It’s criticized from a western perspective, but if you put yourself in the shoes of people in the developing world, it provides an unprecedented opportunity.

Politicians make decisions in favor of their interest groups or their supporters back in their hometowns.

More than trends, consumers need functionality. Everything needs an element of fashion, but that’s more like a spice.

How much is Tadashi Yanai worth?

Tadashi Yanai’s net worth is estimated to be $42 Billion.

How old is Tadashi Yanai?

How tall is Tadashi Yanai?

Tadashi Yanai is a Japanese entrepreneur. Yanai is a businessman and CEO.

He is the President and founder of the Japanese company Fast Retailing. In 1984, the first Uniqlo store was opened in Hiroshima, and the company has since gone global with annual revenues topping $11 billion in 2012.

What do you think about Tadashi Yanai’s net worth? Leave a comment below.