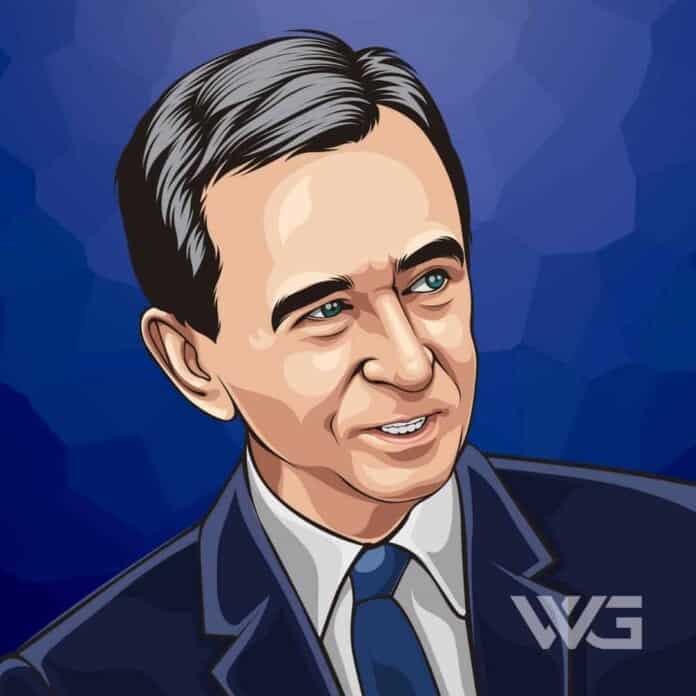 What is Bernard Arnault’s net worth?

Bernard Arnault is a French businessman, who has been serving as the chief executive officer of the Louis Vuitton conglomerate since 1989. Being the principal shareholder in the fashion company he has become the wealthiest man in France and is among the richest in the world.

Bernard went to Maxence Van Der Meersch High School in Roubaix, France and soon after that, he attended École Polytechnique. He graduated in 1971 with a degree in engineering.

Bernard became involved in his father’s business after graduating from college, and he planned for the company to expand its horizons and become involved in other more profitable businesses.

His first action within the company was to convince his father to disband the construction division and reap the benefits. After the construction was dissolved, the family began investing in real estate and became quite successful in doing so.

Bernard was quickly moving up the ranks in the company and was the director of development in 1974, CEO in 1977 and surpassed his father by becoming president in 1979.

In 1981 the French Socialists forced the family to relocate to America and even there they continued to flourish by branch out their real estate to the US.

Arnault returned to France in 1983 and saw a golden opportunity to expand into the textile industry when the firm Boussac Saint-Frères was bankrupt. He co-operated with Antoine Bernheim, a managing partner who worked for an investment firm called Lazard Fréres to fund his purchase of Boussac.

Upon receiving the company, Arnault sold most of the shares and kept only the Christian Dior brand and the department store Le Bon Marché. By 1985 he was the CEO of Dior.

In 1987 Arnault was invited to invest in the LVMH company and eventually chose to invest in a joint share with Guinness PLC.

Throughout the next few years, he would continue to invest and gain more of the company. By 1989 he had control of 43.5% of the company’s shares and began to immediately replace the old average employees and replace them with new ones who would exceed his expectations.

On a mission to work with and grow new businesses, he continued to acquire a few other companies including ‘Guerlain,’ ‘Marc Jacobs,’ ‘Sephora’ and a few others.

Here are some of the best highlights of Bernard Arnault’s career:

“I think in business, you have to learn to be patient. Maybe I’m not very patient myself. But I think that I’ve learned the most is be able to wait for something and get it when it’s the right time.” – Bernard Arnault

“I like that combination between creativity and the creative process and the organization needed to make a business like this successful worldwide.” – Bernard Arnault

“If you deeply appreciate and love what creative people do and how they think, which is usually in unpredictable and irrational ways, then you can start to understand them. And finally, you can see inside their minds and DNA.” – Bernard Arnault

“It is not enough to have a talented designer; the management must be inspired too. The creative process is very disorganized; the production process has to be very rational.” – Bernard Arnault

View our larger collection of the best Bernard Arnault quotes!

3 Rules for Success from Bernard Arnault

Now that you know all about Bernard Arnault’s net worth, and how he achieved success; let’s take a look at some of the lessons we can learn from him:

All things come to those who wait. Be patient because it will happen when the time is right.

You must be able to appreciate and respect creativity as it is essential to the production of any idea or item. You can’t cheat your way through the creative process if you want to have a valuable and quality outcome.

3. The creative process is the key to success

The creative process in any product or idea is the primary source of its success. There is no way around it, and it takes time and careful, creative thinking to produce the best possible outcome.

How much is Bernard Arnault worth?

Bernard Arnault’s net worth is estimated to be $125 Billion.

How old is Bernard Arnault?

How tall is Bernard Arnault?

Bernard Arnault is among the wealthiest men in the world, and his fashion empire has had a tremendous impact on today’s fashion industry.

By creating some of the world’s finest and most luxurious fashion products he has gained a lot of popularity and has millions of clients worldwide.

What do you think about Bernard Arnault’s net worth? Leave a comment below.