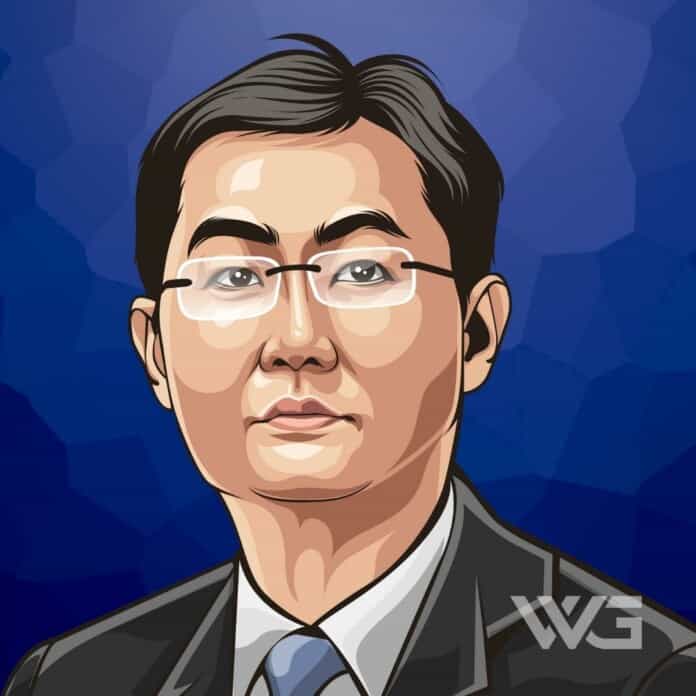 What is Ma Huateng’s net worth?

As of February 2023, Ma Huateng’s net worth is approximately $48 Billion.

Huateng is the chairman, founder, and chief executive officer of Tencent, Asia’s most valuable company and also one of the largest Internet and technology companies in the world.

He is one of the wealthiest businessmen in the world without a doubt.

Ma Huateng was born in Chaoyang, China on the 29th of October, 1971. When his father, Ma Chenshu got a job as a port manager in Shenzhen, near Hong Kong, the young Ma accompanied him.

Huateng was enrolled in Shenzhen University in 1989 and then graduated in 1993 with a Bachelor of Science in computer science.

Ma Huateng’s first work was with China Motion Telecom Development. He reportedly earned $176 per month. During the same time, he also worked for Shenzhen Runxun Communications Co- Ltd- in the research and development department for Internet calling services.

Huateng went on to co-found Tencent in 1998. The company’s first product came after Ma participated in a presentation for ICQ, the world’s first Internet instant messaging service, founded in 1996 by an Israeli company.

“If I have seen further, it is by standing on the shoulders of giants, we knew our product had a future, but at that time we just couldn’t afford it.”

In 2000, Ma turned to US investment firm IDC and Hong Kong’s telecom carrier Pacific Century CyberWorks who bought 40% of Tencent shares for $2.2 million. Afterward, 80% of the company’s revenue came from deals struck with telecom operators who agreed to share message fees.

Here are some of the best highlights of Ma Huateng’s career:

“In America, when you bring an idea to market, you usually have several months before competition pops up, allowing you to capture significant market share. In China, you can have hundreds of competitors within the first hours of going live. Ideas are not important in China – execution is.” – Ma Huateng

“On all open platforms, regardless of whether it’s Facebook or the Apple App Store, the largest segment is entertainment and games. It’s the largest revenue segment. And it’s the same for Tencent.” – Ma Huateng

“At Tencent, we may be businessmen, but we are still chasing our IT, our science. We are still striving to create something really cool, trying to create things we couldn’t even imagine without our new technologies. I am still clinging to this enthusiasm.” – Ma Huateng

“If you ask me what I worry about every morning when I wake up, it’s that I don’t understand future mainstream Internet users’ habits.” – Ma Huateng

“Look at Microsoft, Google, and Facebook. They have all entered many sectors, and actually, in many of those sectors, they weren’t as early as Tencent.” – Ma Huateng

3 Lessons for Success from Ma Huateng

Now that you know all about Ma Huateng’s net worth, and how he achieved success; let’s take a look at some of the lessons we can learn from him:

1. Prepare for tomorrow before closing the book on today

For every minute spent organizing, an hour is earned. You should take that to heart in your day-to-day work. Try to end each day with preparation for the next. Taking stock of the tasks you’ve completed today will help ensure that you get off to a fast and efficient start tomorrow.

2. Stay in the game, even when the going gets tough

When the chips are down, it’s easy to just give up. But it’s in those moments that successful people buckle down and work harder, finding new ways to reach their goals.

Ma Huateng, the founder of Tencent Inc., and the second-richest man in China, almost flamed-out during the early years of his business.

3. Do what you’re passionate about

How much is Ma Huateng worth?

Ma Huateng’s net worth is estimated to be $48 Billion.

How old is Ma Huateng?

How tall is Ma Huateng?

Ma Huateng is one of the most well-known investors and entrepreneur in China.

He is the founder of Tencent, which is Asia’s most valuable company, one of the largest Internet and technology companies, and the biggest investment in the world. He is also the man behind the popular message system WeChat.

As of 2020, Ma Huateng’s net worth is estimated to be roughly $48 Billion, making him one of the wealthiest businessman in the world.

What do you think about Ma Huateng’s net worth? Leave a comment below.