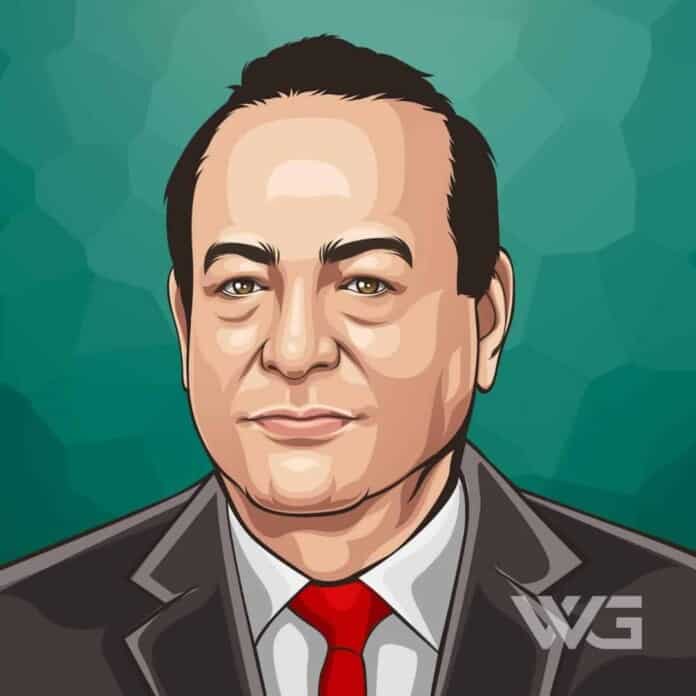 What is Carlos Slim Helu’s net worth?

In 2021, Carlos Slim Helu’s net worth is approximately $72 Billion.

Carlos Slim Helu is a multi-billionaire investor and philanthropist. He has been given the title the wealthiest man in the world by ‘Forbes’ magazine numerous times and currently owns well over 200 businesses worldwide.

Having begun investing his money straight out of college, he now is an extremely wealthy man that is able to donate a considerable amount of his fortune to charities that help numerous different causes.

Carlos Slim Helu was born in Mexico City, Mexico on January 28, 1940, to Lebanese parents along with five other siblings.

Carlos’ father was a successful business owner and had taught all of his children about business at a very young age. When he was only 12 years old, he had already invested in a national bank’s shares.

After his father’s death in 1953, Carlos continued to work for his business until the age of 17.

He went to the National Autonomous University of Mexico and studied civil engineering. While at school he was also teaching algebra and linear programming but went into the business industry immediately after graduating.

Having received numerous years of business training from his father, Carlos began his career by starting his own brokerage. He would invest in small individual businesses, and by the year 1965, he had grown his business enough that he could incorporate other companies or even buy them out entirely.

Although he did invest his money in numerous different kinds of businesses, he mainly focused on mining, real estate, and construction and by 1966 he was estimated to be worth around $40 million.

He continued to invest his funds, and by 1980 he had unified his shares into a parent company called ‘Grupo Galas.’
In 1982 the prices of oil dropped immensely which caused the Mexican economy to suffer greatly.

This led to him expand his shares and investing in international companies, he soon had a 50% share in ‘The Hershey Company.’

In 1990 he continued to extend his control to the telephone communication companies in hopes of soon acquiring the Mexican phone company ‘Telmex’ from the government. After he obtained the company, he soon developed a US version of ‘Telmex,’ and he even purchased a stake in the US mobile company ‘Tracfone.’

After going through heart surgery, he began to pass on some of his daily work to his children and backed away from the business life.

In the 2000’s Carlos continued to invest in some of the biggest companies in the world including ‘The New York Times Company,’ ‘Volaris,’ ‘Saks Fifth Avenue’ and ‘Telekom Austria.’

Here are some of the best highlights of Carlos Slim Helu’s career:

“All times are good time for those who know how to work and have the tools to do so.” – Carlos Slim Helu

“People need to feel very good about their achievements. They get pride from what they are doing.” – Carlos Slim Helu

“Live the present intensely and fully, do not let the past be a burden, and let the future be an incentive. Each person forges his or her own destiny.” – Carlos Slim Helu

“The biggest things in life are not materials.” – Carlos Slim Helu

Now that you know all about Carlos Slim Helu’s net worth, and how he became successful; let’s take a look at some of the success lessons we can learn from him:

Material items are not essential for happiness. Most of the time the most meaningful and valuable things in life are things like love, kindness, and honor.

2. Live in the present

Do not let your life be burdened by mistakes from the past because no matter what your past may have been, you can pave the way for your own future. Live each moment to its fullest and be fearless.

Don’t be afraid to embrace and take pride in your accomplishments. You deserve to feel good about yourself and cherish your achievements.

How much is Carlos Slim Helu worth?

Carlos Slim Helu’s net worth is estimated to be $72 Billion.

How old is Carlos Slim Helu?

How tall is Carlos Slim Helu?

Carlos Slim Helu is one of the wealthiest men in the world and has spent nearly his entire lifetime in the business industry. Having made his first investment at the age of 12, he now is a multi-billionaire who owns stakes in some of the biggest companies in the world.

What do you think about Carlos Slim Helu’s net worth? Leave a comment below.