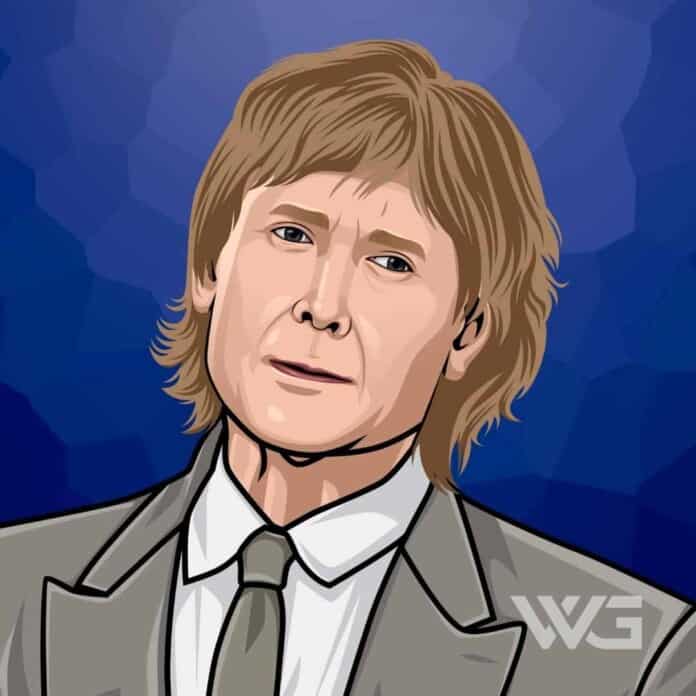 What is David Thomson’s net worth?

David Thomson is a Canadian hereditary peer and media magnate.

In 2020, he was listed as the wealthiest person in Canada.

David Kenneth Roy Thomson was born on the 12th of June, 1957, in Toronto, Ontario.

Thomson is the eldest child of Marilyn Lavis and Kenneth Thomson.  He has a sister named Taylor Thomson, and his brother Peter Thomson is a race car driver.

In 1978, Thomson received his Bachelor of Arts at Selwyn College, Cambridge, where he studied history. As a child, he attended both Upper Canada College and the Hall School.

Thomson started his business career as a junior associate at McLeod Young Weir in Toronto. He left the firm to enter the family business working in several positions in companies controlled by the Thomson family. He was manager of The Bay store at Cloverdale Mall.

Thomson founded the real estate firm Osmington Incorporated, owned and operated outside of the Thomson empire. Osmington acquires and manages commercial real estate assets on behalf of institutional shareholders. The company sold its stake in eight retail properties to the Canada Pension Plan for $336 million in 2010.

Osmington is a partner in True North Sports and Entertainment, owners of the National Hockey League’s Winnipeg Jets and the Bell MTS Place in downtown Winnipeg, Manitoba. Osmington is redeveloping the retail space of Toronto’s Union Station.

His investment activities are managed through Toronto hedge fund Morgan Bay Capital, According to a plan devised decades ago by Thomson Corporation founder Roy Thomson.

Following Thomson Reuter’s sale of a controlling stake in its financial business, he expressed frustrations working in the family business. He began focusing on his own art and real estate activities.

Thomson is a noted art collector, and he owns the world’s largest collection of paintings and drawings by the English painter John Constable. He bought his first Constable drawing at 19, giving the seller “an oil painting in exchange and quite a lot of money.”

How Does David Thomson Spend His Money?

David Thomson spends his money on real estate and art.

Thomson lives alone in a private residence that also houses an underground art gallery in Rosedale, Toronto. Three of his children live in London, UK, where Thomson retains several homes.

Here are some of the best highlights of David Thomson’s career:

“He made the South Seas a great part of his life. Clearly this story comes out of the books he read and the things he learned about the seas during his time out there. He was also crazy about Asian women.” – David Thomson

“Brando clearly was imagining himself as that person. There are several aspects of it that fit with Brando very well; that kind of loner, interested in sailing and the South Seas, drawn to Asian women and eating and drinking.” – David Thomson

“For the best part of 100 years, movies made stories about a certain view of love, and it shaped us all, whether we like it or not. Our lessons were about how to look at people of the other sex. How you kiss, what you say. We learned a lot about love from the movies. We’ve matured a bit, and we can see there’s a lot more to love.” – David Thomson

“I don’t look for anyone to say this is a great novel, although I do think it’s a fine, fun read. But what I think is most interesting is that the character of Annie is so clearly a portrait of Brando and that so much of him gets into it.” – David Thomson

“The character of Annie Doultry is plainly a self-portrait of Brando. There are transcripts of conferences he and Cammell had, and Brando did a lot of improvising, playing the Annie Doultry character. Plainly he saw this as a part that he might play in a movie himself.” – David Thomson

Now that you know all about David Thomson’s net worth and how he achieved success; let’s take a look at some of the lessons we can learn from him:

There’s a funny thing to when you’re writing something that’s not quite yours. You feel unburdened. There’s strange liberty to it.

There had never been such a display of dangerous, brutal male beauty on an American stage – its influence can still be felt.

How much is David Thomson worth?

David Thomson’s net worth is estimated to be $50 Billion.

How old is David Thomson?

How tall is David Thomson?

David Thomson is a Canadian businessman who is the Chairman of the Thomson Reuters Corporation.

]His family is one of the richest families in Canada. Thomson owns The Winnipeg Jets NHL team. His business career has largely been characterized by his work within companies controlled by his family.

That business, known up until 2008 as The Thomson Corporation, specializes in financial services, healthcare sectors, law, science, technology research, tax, and accounting.

What do you think about David Thomson’s net worth? Leave a comment below.