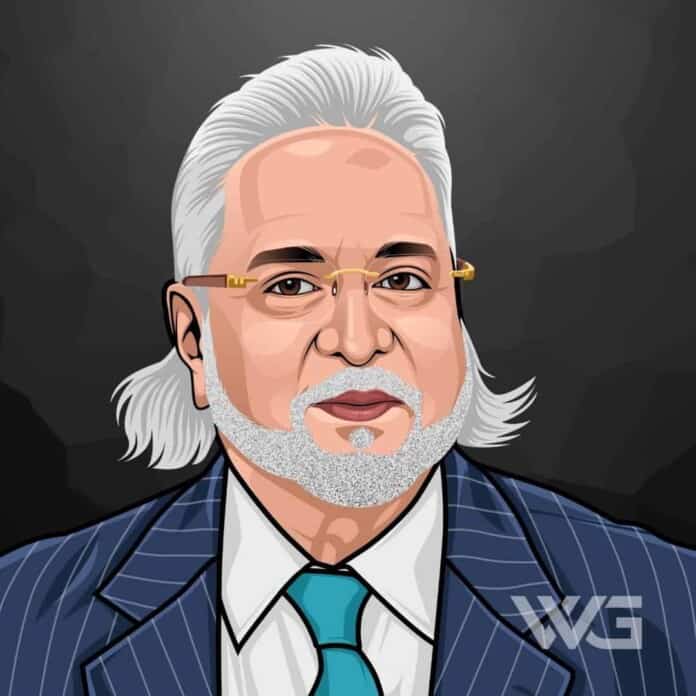 What is Vijay Mallya’s net worth?

Vijay Mallya is an Indian businessman.

Mallya is a former member of Parliament. He is the subject of an extradition effort by the Indian Government to return him from the UK to face charges of financial crimes in India.

He is the former owner of the Royal Challengers Bangalore cricket team.

Vijay Vittal Mallya was born on the 18th of December, 1955, in Kolkata, India.

Mallya is the son of Vittal Mallya and Lalitha Ramaiah. He was educated at La Martinière Calcutta, where he was appointed House Captain of Hastings house in his final year, and at St. Xavier’s College, Kolkata.

In 1986, Mallya married Sameera Sharma. They have one son, Siddharth Mallya, who was born in 1987. They have divorced shortly afterward.

In 1983, Mallya became Chairman of United Breweries Group when his father passed away. Today, the group consists of more than 60 companies. The companies were consolidated under the name UB Group.

All through the 80s and the 90s, he received great success and fame. He soon became one of the most talked-about businessmen in India.

In 2007, he was part of a group that purchased the Formula One racing team Spyker. The team named changed to Force India F1 and then Sahara Force India. He has had a career in politics and is an Independent MP.

In 2012, he ceded management control of the company. Today, he is the chairman of United National Breweries. Aside from alcohol, the group of companies focuses on life sciences, agriculture, chemicals, engineering, aviation, and information technology.

Mallya was forced to step down from the post of chairman of United Spirits with a cheque of $75 million. The payment has been blocked by Indian courts.

How Does Vijay Mallya Spend His Money?

Vijay Mallya spends some of his money on real estate and lavish cars.

Bangalore in India is home to one of the most luxurious and over-the-top luxury mansions ever built in the world. Mallya built his own white house on top of the skyscraper.

Mallya’s car collection includes Rolls-Royce Ghost, a Range Rover, and a Mercedes AMG S65. He also owns his own private jet, which can cost a fortune.

Here are some of the best highlights of Vijay Mallya’s career:

“My father was very clear; I had to have an ordinary upbringing. Put to work as a lowly-paid trainee after college. I didn’t like it at the time, but I can’t help but feel that that was probably the best thing for me.” – Vijay Mallya

“Everybody keeps saying that India’s a poor country. Yes, we have poverty. But I blame the government of India, the political establishment, for their failure to educate and therefore their failure to control the poverty.” – Vijay Mallya

“We have registered a company in the name of Kingfisher International in the US. We will be flying to India and other international destinations, provided we get all necessary approvals at the right time.” – Vijay Mallya

“For the first time, we will be able to offer direct non-stop services between India and the USA, and these aircraft will have a unique configuration giving passengers extra space and comfort on their long flights.” – Vijay Mallya

“I run my own world because I very firmly believe that my destiny, my future, is in my hands, and I don’t want to blame anybody else for the path that I take.” – Vijay Mallya

Now that you know all about Vijay Mallya’s net worth and how he achieved success; let’s take a look at some of the lessons we can learn from him:

Mallya works hard, and he plays hard, too. There is nothing wrong with that.

2. Live the Life You Want To Live

Vijay lives the way he wants to live, and he doesn’t comment on how other people live.

Challenge is something you need to move on and not be afraid of.

How much is Vijay Mallya worth?

Vijay Mallya’s net worth is estimated to be $1.2 Billion.

How old is Vijay Mallya?

How tall is Vijay Mallya?

Vijay Mallya is an Indian businessman and politician. Mallya was born in Kolkata, India.

He graduated from St. Xavier’s College, Calcutta. After graduating, he interned at Hoechst AG in the United States. Known as the “King of Good Times,” Mallya is known for his extravagant lifestyle. He is the chairman of the ‘United Breweries Group’.

What do you think about Vijay Mallya’s net worth? Leave a comment below.