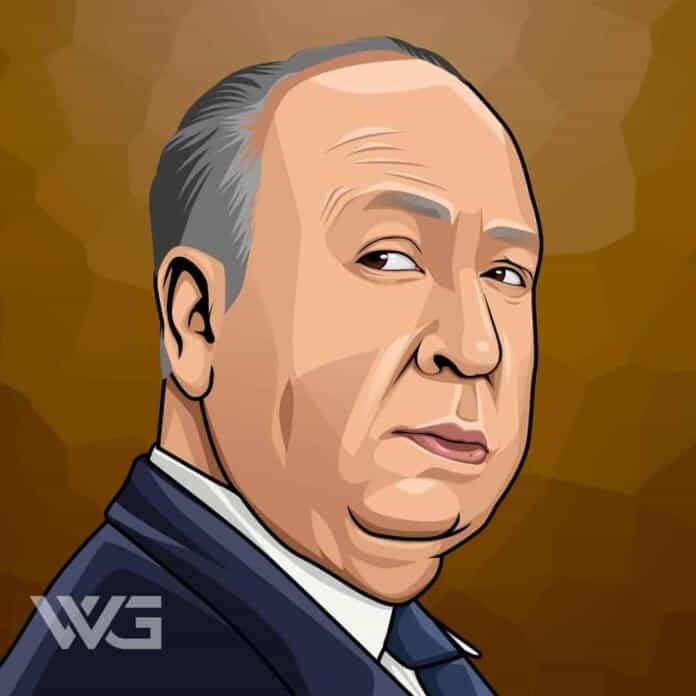 What was Alfred Hitchcock’s net worth?

Alfred Hitchcock was an English film director and producer, widely regarded as one of the most influential filmmakers in the history of cinema. Known as “the Master of Suspense”, he directed over 50 feature films.

Alfred Joseph Hitchcock was born on the 13th of August, 1899 in Leytonstone, England.

He was named after his father’s brother. He was the youngest of the three children in his family.

One of the incidents that took place in his childhood was imbibed in his mind for the rest of life.

Once he was sent to the police station by his father with a note, requesting the policeman to lock Alfred in the prison for several minutes, as he had misbehaved in his house.

He remembered this humiliation, the guilt of being a criminal and the fear of police for his entire life.

His first job was that of a draftsman and advertising designer at a local cable company, Henleys. After the company opened its in-house publication in 1919, The Henley Telegraph, he started writing short stories for it and became a contributor in its success.

He wrote short stories, often suspense thrillers, for the publication including ‘Gas’, ‘The Woman’s Part’, ‘What’s Who’ and ‘Fedora’.

Gradually, he started working as a screenwriter, art director and assistant director in movies such as ‘Woman to Woman’, ‘The White Shadow’, ‘The Blackguard’, and ‘The Prude’s Fall’.

In 1926, he directed his first successful suspense thriller movie ‘The Lodger’, based on the subject of serial killings in London. Initially, the producer shelved the project but it was released in 1927, becoming a major critical and commercial success.

In Hollywood, he continued his streak of psychological and suspense thrillers with movies such as ‘Spellbound’, ‘Notorious’, ‘Strangers on a Train’, ‘Dial M for Murder’, ‘Rear Window’, ‘Vertigo’, ‘North by Northwest’, ‘Psycho’, ‘The Birds’ (1963) and many other such classics.

Here are some of the best highlights of Alfred Hitchcock’s career:

“I’m frightened of eggs, worse than frightened; they revolt me. That round white thing without any holes, and when you break it, inside there’s that yellow thing, round, without any holes… Brrr! Have you ever seen anything more revolting than an egg yolk breaking and spilling its yellow liquid? Blood is jolly, red. But egg yolk is yellow, revolting. I’ve never tasted it.” – Alfred Hitchcock

“Violence on the screen increases violence in people only if those people already have sick minds. I once read somewhere that a man admitted killing three women and he said he had killed the third woman after having seen Psycho. Well, I wanted to ask him what movie he had seen before he killed the second woman.” – Alfred Hitchcock

“Had the beautiful Ms. Reville not accepted a lifetime contract without options as Mrs. Alfred Hitchcock some 53 years ago, Mr. Alfred Hitchcock might be in this room tonight, not at this table but as one of the slower waiters on the floor. I share my award, as I have my life, with her.” – Alfred Hitchcock

“I once made a movie, rather tongue-in-cheek, called Psycho. The content was, I felt, rather amusing and it was a big joke. I was horrified to find some people took it seriously. It was intended to make people scream and yell and so forth—but no more than screaming and yelling on a switchback railway (rollercoaster).” – Alfred Hitchcock

“The two things are absolutely miles apart. A mystery is an intellectual process, like in a whodunit. But suspense is essentially an emotional process. Therefore, you can only get the suspense element going by giving the audience information.”– Alfred Hitchcock

Now that you know all about Alfred Hitchcock’s net worth, and how he achieved success; let’s take a look at some of the lessons we can learn from him:

1. You Should Probably Own a Copy of “Hitchcock/Truffaut.”

Wes Anderson, David Fincher, James Gray, Paul Schrader, Oliver Assayas, Peter Bogdonovich, Martin Scorsese, and more all speak adoringly about this book, and these are just the filmmakers who made it on to the documentary.

If anyone of these great filmmakers gives advice, it would be wise to listen. When everyone on this list gives the same recommendation, it should probably be considered an essential text for any filmmaker.

Plus, you can find a copy for only fifteen dollars, so it’s a pretty inexpensive way to get an education in filmmaking.

When we think of Hitchcock as a master of suspense, we usually think of the terrifying suspense of “Psycho” or “The Birds,” but Hitchcock believed that suspense could and should be exercised in as many different scenarios as possible. He used the example of a man proposing to a woman.

If done right, the audience should have to wait for the woman’s response in a way that makes them examine the scene for clues as to what her answer might be.

This is a moment of suspense, and creating suspense in the ordinary, as well as the extraordinary, keeps your audience engaged.

3. Blandness Can Be Necessary

Good storytelling isn’t about shocking and awing your audience constantly. Knowing when to keep your story bland can be a great way to trick your audience into believing that they know what is about to happen.

In “Psycho,” Hitchcock purposefully kept the beginning of the movie bland so that, when the killer is introduced halfway into the film, the audience is completely unprepared for it and the scare is maximized.

Alfred Hitchcock was an English movie director, famously dubbed as the ‘The Master of Suspense’.

He is remembered by other filmmakers for he inspired them to be passionate about their work, and by the people around the world for his entertaining and thrilling stories.

What do you think about Alfred Hitchcock’s net worth? Leave a comment below.