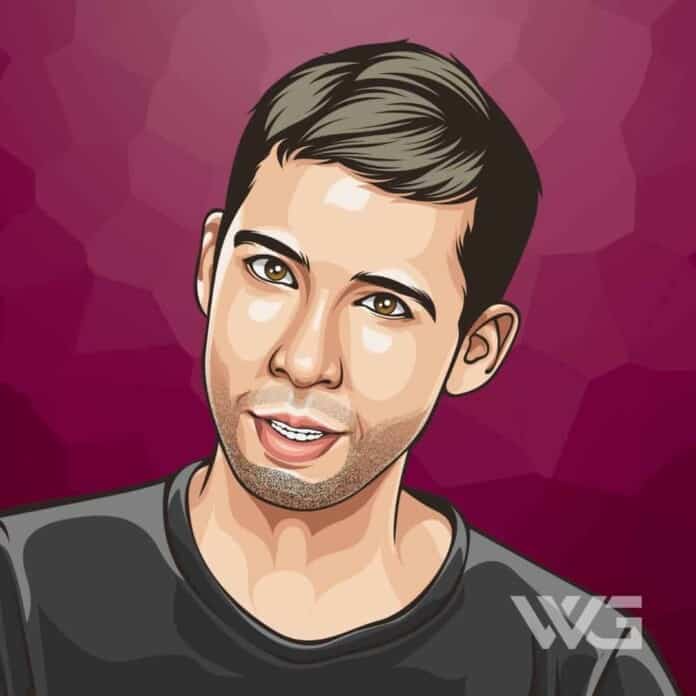 Example is an English musician, singer, songwriter, rapper and record producer from London. His name arose due to his initials being E.G., which is an abbreviation of the Latin phrase exempli gratia (“for example”).

Elliot John Gleave was born on the 20th of June, 1982, in London. Gleave is the son to Elaine Johnston and Michael Gleave.

In a 2012 interview with The Guardian, he said that “I was diagnosed with Asperger’s when I was younger. I was amazing with numbers, I had a photographic memory, and I hated reading fiction, preferring books on nature and history. All symptoms of mild autism.”

Example’s big break came in 2006 when he released three singles through his own label “All The Chats”. After signing a deal in the same year with The Beats, he put out a response to Lily Allen’s number one hit “Smile”.

Example’s second official Beats single entitled “You Can’t Rap” was released in March 2007, followed by a re-release of “I Don’t Want To” on 11 June 2007.

In 2011, he released his first single from his third album, “Changed the Way You Kiss Me” where it debuted at number one in the UK. The song also charted in many European countries and Australia, where it was also certified Platinum.

In 2019, Example released his new single “All Night”. It peaked at #87 in the UK and at #26 on the UK Dance Chart. This marked Example’s first appearance on the UK Singles Chart since his 2015 single “Whisky Story”.

Here are some of the best highlights of Example’s career:

“EDM was just blowing up, ‘Change the Way You Kissed Me’ arrived about a year before EDM got big, we went to America with it which I think was a little bit early, then the end of 2012 it got massive. Calvin [Harris] wasn’t even getting played a lot on the radio at this stage.” – Example

“We had a couple more hits, and then it was like… I’m saying this with hindsight now… at the time it felt easy because I never tried to write hits – I just went in the studio and had fun. Obviously, I was going through some dark stuff, there was a breakup, I was partying too much…” – Example

“I got married and had kids, “Won’t Go Quietly was like the breakthrough album, then it was basically four albums in four years. It was an amazing run.” – Example

“I grew up in a south London school where everyone would do these rap battles in the playground, but I was an indie kid at heart. So I made that album. That’s where it plateaued a bit. I reckon if I’d made three more ‘Changed the Way You Kissed Me’s I’d be even bigger now.” – Example

Now that you know all about Example’s net worth, and how he achieved success; let’s take a look at some of the lessons we can learn from him:

And if you give it a foothold in your life, it will take you with it.

2. You Can Become Bitter or Better as a Result of Your Circumstances

Your attitude is always up to you. No matter the circumstance, remind yourself that you have a choice. It’s up to you to get the results you want.

3. It’s in Losing Yourself That You Find Yourself

The greatest challenge in life is discovering who you are, and the second greatest is being happy with what you find.

How much is Example worth?

Example’s net worth is estimated to be $12 Million.

How old is Example?

How tall is Example?

Example first found success with the release of his second studio album, Won’t Go Quietly, which peaked at number four on the UK Albums Chart and peaked at number one on the UK Dance Chart. He is considered to be one of the greatest musicians in the industry.

What do you think about Example’s net worth? Leave a comment below.