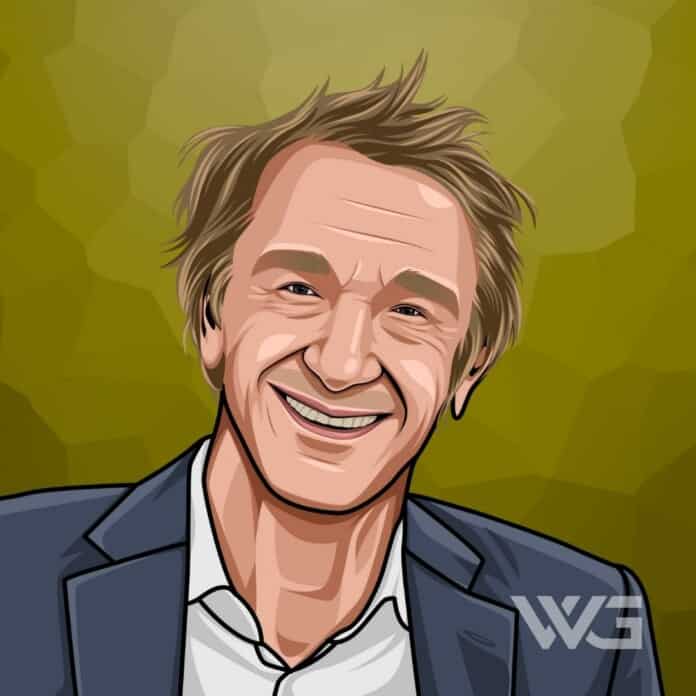 What is James Ratcliffe’s net worth?

Ratcliffe is the chairman and chief executive officer of the Ineos chemicals group, which he founded in 1998 and of which he still owns two-thirds, and which has been estimated to have a turnover of $80 billion.

He does not have a high public profile and has been described by the Sunday Times as “publicity shy”.

As of December 2022, James Ratcliffe’s net worth is estimated to be $19 Billion.

Sir James Arthur Ratcliffe was born on the 18th of October, 1952, in Manchester.

Ratcliffe is the son of a joiner father and an accounts office worker mother.

His father eventually ran a factory making laboratory furniture. Aged ten, he moved with his family to Yorkshire, and Ratcliffe attended Beverley Grammar School and lived in Hull up to 18. Ratcliffe graduated from the University of Birmingham with a degree in chemical engineering in 1974.

Ratcliffe’s first job was with oil giant Esso, but he decided to broaden his skills into finance by studying management accounting and taking an MBA at London Business School. He subsequently, in 1989, joined the US private equity group Advent International.

He was a co-founder of INSPEC, which leased the former BP Chemicals site in Antwerp, Belgium. In 1998, Ratcliffe formed Ineos in Hampshire to buy out INSPEC and the freehold of the Antwerp site.

In 2010, he moved Ineos’s head office from Hampshire to Rolle, Switzerland, decreasing the tax the company paid by £100m a year.

Ratcliffe opened the UK headquarters of the chemicals and energy group in Knightsbridge in 2015, London, along with gas and oil trading and other functions, saying he was “very cheerful about coming back to the UK.”

He was pleased with UK policy, London as a business base, and untroubled by the prospect of the UK leaving the EU. “For the time being,” it remains an Anglo-Swiss company.

How Does James Ratcliffe Spend His Money?

James Ratcliffe spends some of his money on his real estate.

James Ratcliffe’s Home and Other Purchases

Ratcliffe lives in Monaco and Hampshire.

In 2017, he built another luxury home at Thorns Beach, near Beaulieu, on the Hampshire coast, which would replace an existing two-bedroom bungalow. Ratcliffe has owned two superyachts, Hampshire and Hampshire II. His first yacht was built as Barbara Jean by Feadship.

Here are some of the best highlights of James Ratcliffe’s career:

“Unions can play a valuable role in large organizations where it is difficult to talk to a thousand people. They can negotiate annual pay awards with management, represent grievance cases, and explain and advise on complicated changes in employment or pension law.” – Jim Ratcliffe

“It would be nice if areas could be revitalized – like places in the U.S. such as Pittsburgh, for example, which have been transformed through shale. There you have shiny cars in a shiny city because of the development of shale in an old industrial heartland.” – Jim Ratcliffe

“Germany has great skill levels, great infrastructure, high-quality plant. If you go to the U.K., we’re very creative, and we’ve got the language, but energy costs are pretty much the most expensive in the Western world; pensions are pretty expensive, and the skills are significantly below those in Germany and the U.S.” – Jim Ratcliffe

“I think the U.K. would be perfectly successful as a standalone country, parts of the European marketplace like Norway and Switzerland but without the expensive E.U. bureaucracy.” – Jim Ratcliffe

“Brussels has become inefficient and very bureaucratic, which makes it slow to do things. The concept of the United States of Europe will never work.” – Jim Ratcliffe

Now that you know all about James Ratcliffe’s net worth and how he achieved success; let’s take a look at some of the lessons we can learn from him:

We may encounter many defeats, but we must not be defeated.

If you are not willing to risk the usual, you will have to settle for the ordinary.

How much is James Ratcliffe worth?

James Ratcliffe’s net worth is estimated to be $19 Billion.

How old is James Ratcliffe?

How tall is James Ratcliffe?

James Ratcliffe is a British chemical engineer turned financier and industrialist who has been chairing Ineos Group.

One of the richest people in today’s UK, Ratcliffe prefers to keep a low profile.  He is the chairman and chief executive officer of the Uneos chemicals group, founded in 1998.

As of December 2022, James Ratcliffe’s net worth is roughly $19 Billion.

What do you think about James Ratcliffe’s net worth? Leave a comment below.

What is Elton John's net worth? Introduction As of ,...