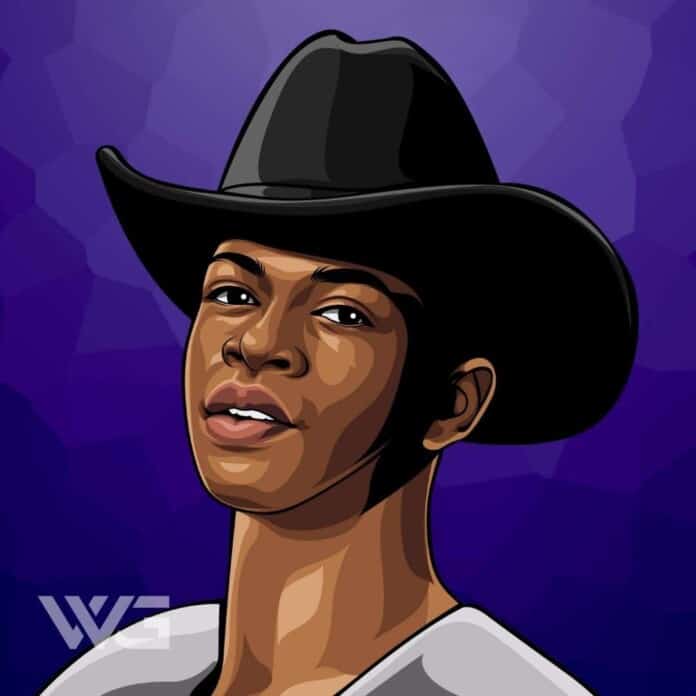 What is Lil Nas X’s net worth?

Lil Nas X is an American rapper, singer, and songwriter from Atlanta, Georgia. He is best known for his country rap breakout single ‘Old Town Road’. The song peaked at number one on the Billboard Hot 100.

Montero Lamar was born on the 9th of April, 1999, in Atlanta, Georgia. His parents divorced when he was six, and he settled in the Bankhead Courts housing project with his mother and grandmother.

He began playing trumpet in the fourth grade and was the first chair by his junior high years, but quit the instrument out of fear of looking uncool.

In 2018, he released the country rap song “Old Town Road”. The song went viral in early 2019 due to the “Yeehaw Challenge” meme on the social media app TikTok.

The song also debuted on the Hot Country Songs chart at #19 and Hot R&B/Hip-Hop Songs at number 36.

When determining genres, a few factors are examined, but first and foremost is a musical composition. While “Old Town Road” incorporates references to country and cowboy imagery, it does not embrace enough elements of today’s country music to chart in its current version.

Country music star Billy Ray Cyrus has since supported Lil Nas X‘s “Old Town Road” in a tweet, and he is a featured vocalist in a remix of the song released in April 2019.

Here are some of the best highlights of Lil Nas X’s career:

“Initially I was like, “I think I’m being discriminated against.” But then as I went on to think about it, I felt like it was more of a purist situation, like, “We want this to stay this way.” And even though they have a lot of changes going on with country [music] – like a lot of pop country and even the [songs] with trap influence.” – Lil Nas X

“I started using the Internet heavily right around the time when memes started to become their own form of entertainment. I started to get into every side of the Internet around 13-ish. Not even intentionally, just learning how it works and how to use it to my advantage.” – Lil Nas X

“This is gonna be insane. Oh, and what’s being planned is gonna be perfectly executed. You know, it’s Will Smith in like my second music video ever. So that’ll be a big upgrade.”  – Lil Nas X

“I’m a fan of all genres of music. I have a few country songs I like. I’m not gonna say I’m a huge country fan but, you know, I listen around.” – Lil Nas X

Now that you know all about Lil Nas X’s net worth, and how he achieved success; let’s take a look at some of the life lessons we can learn from him:

Approaching each experience with a sense of interest and wonder can sustain your success.

You must have the wisdom to discern the difference between fleeting happiness and true joy.

Never stop being interested to learn something new or further enhance a skill you already have.

How much is Lil Nas X worth?

Lil Nas X’s net worth is estimated to be $7 Million.

How old is Lil Nas X?

How tall is Lil Nas X?

As of December 2022, Lil Nas X’s net worth is estimated to be roughly $7 Million.

What do you think about Lil Nas X’s net worth? Leave a comment below.